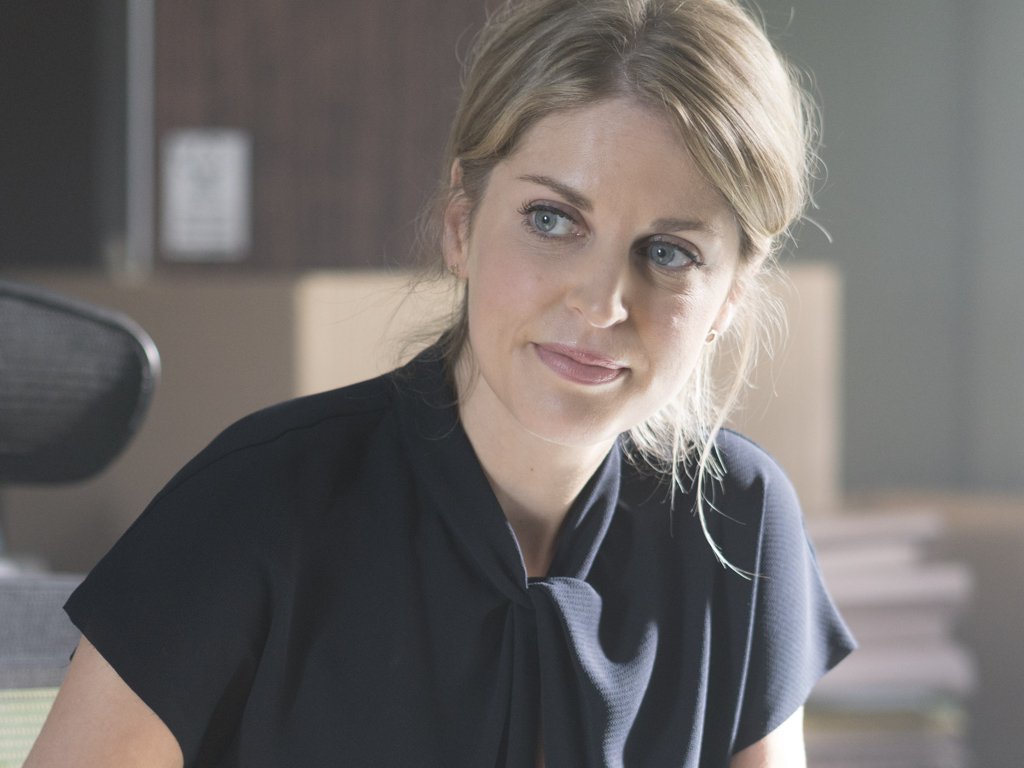 Amy Huberman, shown as Tara in "Striking Out" Season 2 on Acorn TV, spent a year in Chicago when she was 19. (Acorn TV)

When I met Amy Huberman and Neil Morrissey earlier this year, we were set to talk about Season 2 of their wonderful Irish drama Striking Out coming to Acorn TV. But when drinking stories come up, interviews don’t always go quite as planned.

It turns out Huberman, who stars as Dublin lawyer Tara Rafferty in the series, spent a year in Chicago before she became an actress. Morrissey, who plays Tara’s friend and a fellow lawyer, Vincent Pike, shot a film in the Windy City.

But the real surprise of this revelation is that Huberman lived in the same neighborhood I did—just a few years apart. And she apparently had just as much fun during her gap year as I did when I first moved to Chicago.

“It was my first time in the States,” she told me. “I had the best time of my life.”

The three of us reminisced about Chicago during our January interview at the TV Critics Association winter tour in Pasadena. Forgive the indulgence, but Huberman has some good memories.

We dive into both seasons of “Striking Out” in a separate post. Season 2 of the series streams on Acorn TV beginning March 16.

Neil Morrissey and Amy Huberman is Season 1 of the Irish drama “Striking Out” on Acorn TV. (Acorn TV)

I’m here from Chicago, so this is awesome I get to talk to you two.

Amy Huberman: I love Chicago. I went for my J-1 [Visa] Chicago for a full summer when I was 19. My first time in the States, I loved it.

Neil Morrissey: I wonder if I was there? I did a movie, “Triggerman,” and we had shot Toronto, Chicago and England. And then we probably had to get some shots on the L and all that sort of stuff, so we went at that about four, five days in Chicago and I had brilliant time. [Note from Curt: “Triggerman” came out in 2002, so it probably filmed in Chicago in 2001.]

AH: I was a student at the time. We went on “The Jerry Springer Show.”

AH: And we were trying to get on Oprah—we couldn’t. But we went to Jerry Springer. Remember Jenny Jones? We went to “The Jenny Jones Show.”

I’ve been on Jenny Jones, too.

AH: No way! We were living in Roscoe Village.

AH: No way! Are you serious? We used to go to the Retro on Roscoe [Festival] at the weekend. And I worked in a Greek restaurant downtown with this Greek family. I waitressed and it was great. It was the best summer ever.

That’s awesome. My little patch of Roscoe Village was on Roscoe between Damen and Western.

AH: Oh my God. Damen! That’s bringing it all back to me.

I think the only thing that’s still there from when I lived over there, which was probably a few years before you were in Chicago, is a bar called the Village Tap.

AH: No way! I think I have been there.

It had the best burgers. Did you shoot anywhere near there, Neil?

NM: We had to get some shots down on the South Side. It was kind of like: get in the car, drive, get out, get the camera ready and start walking. But you know what, everyone was really, really lovely. “What are you guys filming?” I said, “We’re doing a movie.” It was dead cool.

Every night we tried to get out and go to a bar where there was someone playing blues. There were so many great bars with fantastic bands—really, really talented. It was just so great.

AH: Oh my God, it was amazing. And it was my first time in America, so I am just having the time of my life. I remember we used to spend all our money boozing and we’d have about $3 left at the end of the week.

I got a sweet deal because you had to be 20 to serve alcohol and we were only 19. But I was working with this great family who were like, “You’re Irish, we’re Greek—we’re the same. You can work here.”

I was working and the police used to come in and I would panic: “Oh my God, I have to hide in the kitchen!” But it was fine, because all my friends had to work in retail for retail money, but I was on tips, baby! So I would work in the morning and then just go to the beach and just would sail no matter what.

I’d have $2 by the end of the week. There was a place in Roscoe Village that used to sell potato skins for a dollar, so that was our dinner when we’d run out of money.

NM: And get a portion of potato skins each.

It’s probably the exact same bar that I’m talking about, the Village Tap.

AH: It probably is. The skins were really tasty.

That’s hilarious. We could have met then! But we should probably talk about “Striking Out” season 2.

Amy Huberman and Neil Morrissey tease Season 2 of Striking Out

Phyllis Logan lets her hair down for Girlfriends