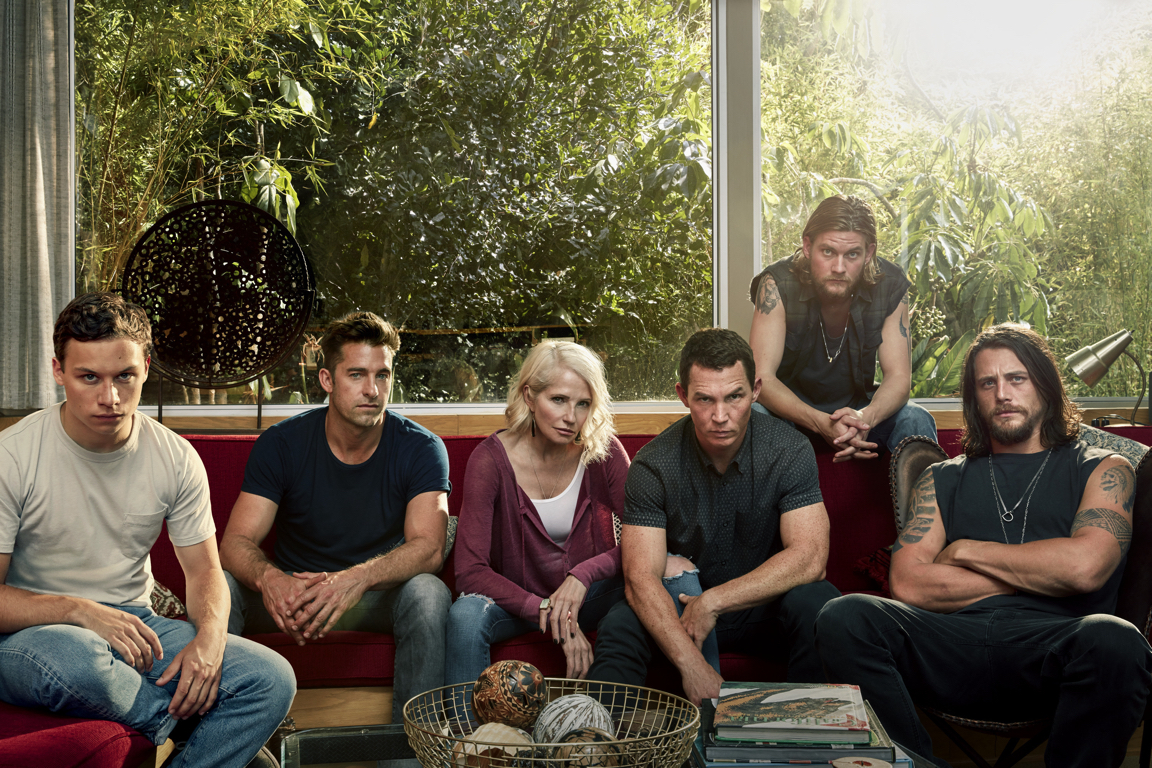 The criminal Cody family of Animal Kingdom is on a collision course with the law—or each other—as the TNT hit’s first season comes to a close this week.

Spoilers ahead for those viewers not caught up!

The Cody brothers—Pope (Shawn Hatosy), Craig (Ben Robson) and Deran (Jake Weary)—pulled off a daring heist planned by their adopted brother, Baz (Scott Speedman). Things went south shortly after their celebration when mama Cody, Smurf (Ellen Barkin), sent Pope to deal with Baz’s wife, whom she suspects has ratted them out to the police. Little does she know that her grandchild, J (Finn Cole), is holed up with two detectives who are trying to wring information from him.

Smurf likes to keep her brood off balance—and working to her advantage—by pitting them against each other. But for the most part the Cody kids are supportive, as when Craig told closeted Deran he didn’t care about his sexual orientation  (best scene ever).

While the Codys may not remain supportive of each other when their latest scandalous—um, murderous—behavior is revealed, the actors playing them have each other’s backs.

When I spoke with Weary and Robson about their “Animal Kingdom” roles, I named a sibling trait and asked which of their co-stars it matched most. Hatosy responded to the same list via email. I have yet to hear back from Speedman or Cole.

They all were a little worried about throwing a co-star under the bus, but I urged them to do it anyway. Here are the results.

The first season finale of “Animal Kingdom” airs at 8 p.m. CT Aug. 9 on TNT. It already has been renewed for a second season.

You can. Most likely to get into trouble? Ben.

And most comfortable with his shirt off? Ben.

Most likely to get into trouble? Ben, Jake, Scott, Finn and Shawn in that order.

Biggest goof on set? Ben and his weird Youtube videos. Jake and Scott are a close second. Ask Jake about that time he walked into an important scene with EB and dropped wind.

Most competitive? I will say me, but it hasn’t really come up except that time I played Ben in tennis. The younger guys play a lot of video games so they will speak to this.

Most likely to take charge? Speedman because he’s the oldest and wisest. I feel like they’re going to say me. Fingers crossed.

Most charming? Fuck, they’re all charming. Just look at them.

Most comfortable with his shirt off? Please, Speedman considers eating a banana a cheat day.

Biggest mama’s boy?  I might have to go for Jake because he’d Facetime his parents. I didn’t know of anybody else that was doing that on set.

Most likely to get into trouble? I don’t really want to say myself on this but I have a feeling it might be.

Biggest goof on set? Jake—in the most loving way.

Most competitive? Oh Shawn; I’ve played tennis against him. The man’s a machine.

Most likely to take charge? Ellen.

Most charming? Finn; he’s got the British side of him. It can’t hurt you, can it?

Most uptight? I’ll go with Scott.

Most comfortable with his shirt off? I feel like I should say me because I think I’ve been naked every scene pretty much in the show. That’s a tricky one. Hang on. Who else has their shirt off a lot in this show?

Jake said you. Yeah, I had a feeling that was coming. That’s because I am basically naked the entire time, so I guess I can’t say myself so I’m going to say Jake.