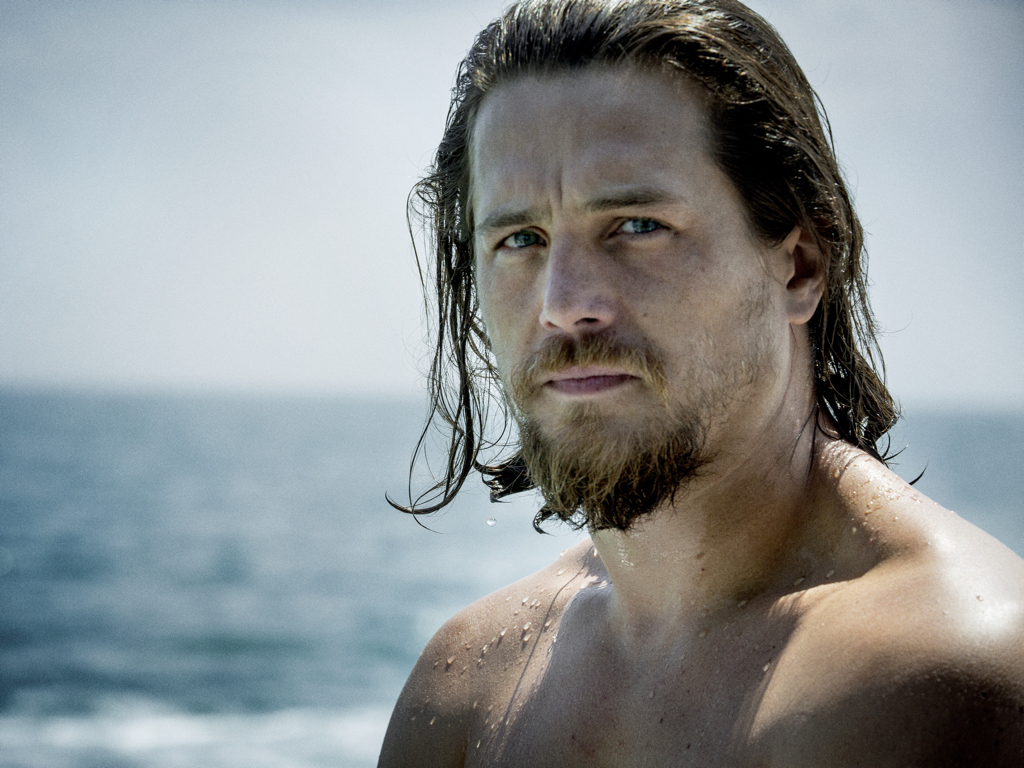 “I’m not sure how much I’d like to say,” the English actor said, laughing, when asked about onset antics. “There were a lot of fun pranks. Everyone gets on. … It’s still a very tight group.”

Robson plays wild middle Cody child Craig in TNT’s summer hit inspired by the 2010 Australian film of the same name. Craig’s brothers include recent parolee Pope (Shawn Hatosy) and closeted Deran (Jake Weary, interview here). Baz (Scott Speedman) grew up with the boys and they consider him a brother. Throughout the season, they’ve been inducting their young nephew, J (Finn Cole), into the family business.

Despite all the boys, testosterone doesn’t rule in the Cody family. Their mother, Janine “Smurf” Cody (Ellen Barkin), runs the family and its criminal enterprises with emotional and psychological manipulation.

Yet even in his unpredictable family of criminals, Craig sets himself apart with his love of drugs, fast vehicles—and nudity.

I caught up with the former “Vikings” cast member to talk about Craig’s clashes with his mother, how he prepared to play an adrenaline junkie and what’s in store the rest of the first season. Robson revealed one story from set and talked about all the attention a certain part of his body has been getting.

How does a lad from Newcastle, England, become so convincing as a drug-loving, criminally-minded surfer dude?

I’ve got my parents to thank for that really. They really took me to the dark side. I’m only kidding.

I think I was quite lucky in terms of [growing] up watching a lot of American TV. California is one of the most celebrated states in the world, so you see a lot of it. You definitely have a lot of interest in that. In terms of actually getting over here and becoming an actor in California I would agree with you; it’s been a long journey.

But I think with any character you just have to find the truth of their core. You start there and start building everything else around that. In terms of being a wild party boy like Craig, I spent six, seven years working in night life. You definitely find elements of his mindset over the years of working in that industry.

What were you doing—bartending, bouncing?

I did everything. [Laughs.] I started off as handing out the flyers in nightclubs just to get them into the clubs. Living in Bristol, I used to run four or five clubs a week. I think they had something like 6,000 to 7,000 people a week came in the clubs. It was another life.

I bet. Tell me about playing such an adrenalin junkie. What has been the most challenging thing and the most fun part of that?

The challenge is definitely finding the freedoms that being a person like that brings, you know? I think that’s a constant chase needing the next rush, whether it’s sex, murder, bikes, whatever— the latest drug he can get. It’s all very much down to an instant, a moment.

When you try to get to the bottom of that need—to understanding it—training on motor bikes seemed to make sense. There’s no way of movement from A to B that’s more freeing than being on a motorbike, I think. That freer motion is such a strong image and that sort of symbolizes him. I think that freedom is really a big part of him.

Jumping on bikes and learning how to do crazy things in the desert and even on the roads with some of the “Animal Kingdom” stunt guys in preparation for the role was definitely a huge rush. But I did question whether I should be doing this on a bike a week before I’m going to start shooting.

I challenged myself as Craig would, which was a nice part of preparation. It’s what his character is; he’s very present. I think that’s a quality that’s very much to be admired. I think he very much lives for the moment that it is now and thinks about his actions afterwards. It’s a very unique way of thinking and one that I don’t think is as common as we’d like to all believe that we have in this era.

Jake Weary told me that you guys do pretty much all of your stunts. It was important for you to do that motorbike stuff, right?

Absolutely. Whether it was the surf thing, and especially the bikes, there was a lot of help to get into Craig. I think all the time you’re trying to find the keys to getting into any character you start by getting to understand the culture, what it is to ride. It’s a very different feeling going 70-80 miles an hour on a bike than it is in a car.

In the “Child Care” episode, Smurf embarrassed Craig and belittled him. Can he recover from that?

I feel like he’s got in trouble with Smurf so many times he is kind of used to it. Yeah, I think he can recover. But I think you’re right: It isn’t easy to be that humiliated and embarrassed in public. We’re still talking about a man in his late 20s having been completely emasculated by his mother, who’s taken everything that’s important away from him.

Can he grow up after it? Can he become the man, the soldier that she talks of him being? I think we always get these wakeup calls in life and I think Craig definitely takes a sense of that moving forward. He needs to know how to stay in charge and impress Smurf.

Smurf is obviously such an important person to appease. She’s his livelihood, his mother. Everyone in the family fights for that love and attention that she gives because you get a lot more responsibility with the more faith she puts in you.

So I think he can recover. Obviously it’s going to take a second to adjust and see how long the that bond will be affected. But we all get scolded by our parents growing up. Again, it’s done in a way to try to challenge you to grow up and to mature in another way, to become a better version of who you really are. Craig can definitely find another way of impressing Smurf.

Jake said Deran most fears being outed to his family and thus, kicked out of the family. What is Craig’s biggest fear?

I think it’s very much the same for Craig. I think that’s the fear that they all live with. To be kicked out and to have no identity would be the worst, especially for Craig. He’s so proud of his family, of being a Cody. It means everything to him, which is why you see him put his body on the line that much and more than everyone else. That’s what he brings to the family. I think it gives him that swagger, to a certain degree, when he walks down the street. He  knows that being a Cody is something to be proud of. It’s his name. It’s everything about him.

They’re all fighting to not be kicked out of the family. I think they’re quite an interesting group. Someone used the analogy “a pack of wolves.” When they’re all at it with each other they’re all just sort of butting heads. But as soon as someone else butts heads against one of them, then the entire family turns and destroys that person before they can go back to attacking each other again. That’s how they show love toward each other.

I think definitely for Craig that would be the same. I think that shame he felt [in “Child Care’] with Smurf showed that. He lost a couple of very important things at that point. I think to be threatened as not being of any worth to the family is a stage before almost being threatened to be taken out of the family.

Fans have taken note that you’ve spent quite a bit of time disrobed in this show and have commented on a certain part of your body.

You’ve said you’d much rather read critiques about your butt than about your acting. Why is that?

[Laughs.] I think your acting is just so personal. You put so much work into that … There’s nothing I can do, I guess, about my butt. My butt is just my butt. Acting is the thing I’m getting paid to do. So I think I find [critiques of my acting] a lot more painful. … Like I said, I don’t mind [talk about that] as long as someone gives me work—whether it’s because of my butt or my work, I’m very happy.

What was the vibe like on set for this? Jake said you guys had a lot of fun. Anything specific you can remember?

There was quite a lot. Being around that many boys, we’re just trying to do [fun] stuff, which is cool. I don’t know if you remember the scene where Jake lights the Range Rover with a cigarette and it torches?

I got so annoyed he got to do that. He’s like, “Yeah, I’m pretty happy about it.” Then he walks over trying to look all badass and he flicks the cigarette and misses the car. It was a very amusing thing to watch. He couldn’t even light an entire car fueled with petrol. … There was just lots of winding up everyone. With a lot of boys on that set, all kind of different ages in terms of their supposed maturity, there is just a lot of fun.

Earlier this year we talked a little bit about working with Ellen, but you’d only shot the pilot. Do you enjoy working with her?

Absolutely. I think you’re working with someone who’s got to where they are because they’re such a powerhouse in pretty much every aspect … To get that opportunity to work with the legends of any industry, let alone this one, is a really validating thing when you’re sort of moving forward through your career.

It’s amazing to watch her do what she does. She’s unbelievable in what she’s doing playing Smurf. But she’s also a friend and a really great person to work with. She’s very helpful when you’ve got questions and ideas and even when talking about her career and life. She’s an incredible person to work with and I’m privileged to be in this position. And she’s a lot of fun.

What can you tease going forward?

It’s the recovery from more of the crazy situations everyone’s got themselves in yet again. They’re building toward a big project, which is why Smurf’s been locking everyone’s behavior up. Also, you’ll  see a lot more of the boys being boys instead of the Codys. Smurf will push them to places where they don’t necessarily feel comfortable.