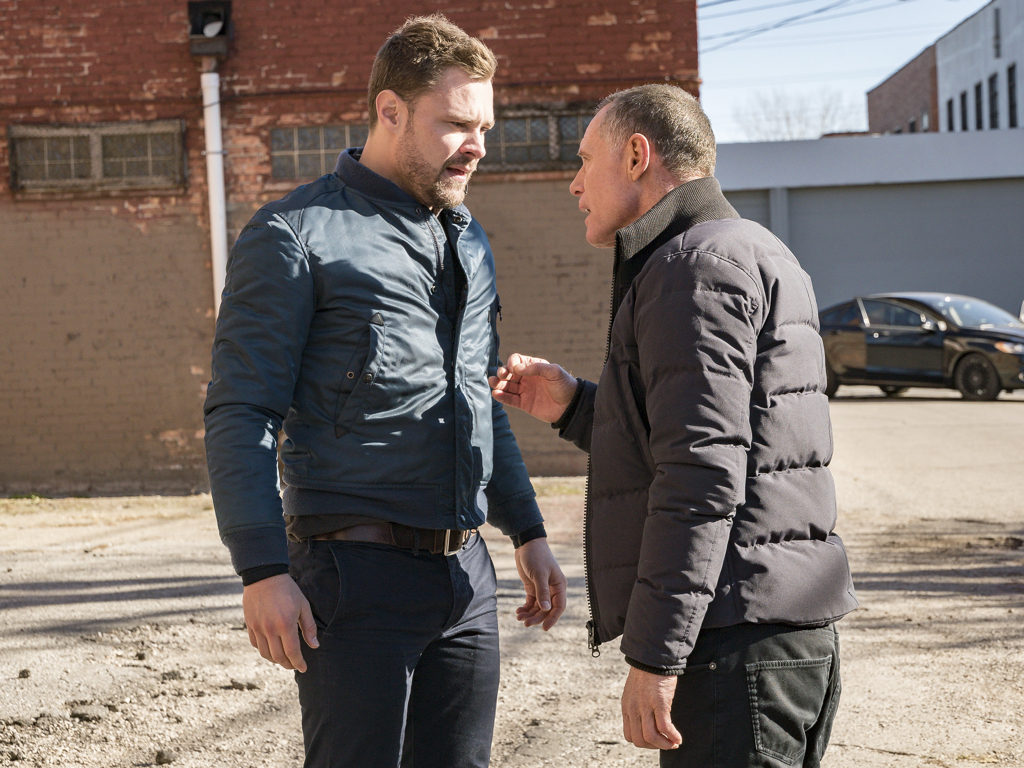 Ruzek (Patrick John Flueger, left) has some explaining to do to Voight (Jason Beghe) in "Chicago P.D." (Matt Dinerstein/NBC)

Patrick John Flueger will be back in the latest episode of Chicago P.D., but his character might not have a future in CPD’s  Intelligence Unit.

When last viewers saw Flueger’s Adam Ruzek in the fall finale, the detective was facing down his boss, Hank Voight (Jason Beghe), who had learned Ruzek was working as a mole and spying on the unit for Lieutenant Denny Woods (Mykelti Williamson).

Det. Alvin Olinsky (Elias Koteas) dropped Ruzek off in a dark, secluded place. It’s never a good sign when you’re brought to this kind of meeting with Voight.

“I don’t think he’s incredibly sure that he’s going to walk away from the situation,” Flueger told me during a phone call. “If he had time just to step back and think about it he would be like, ‘Well, of course he wouldn’t kill me.’ But I don’t know—who knows?—Voight’s pretty unpredictable. So I think he’s shitting in his pants.”

We talked about scenes from the fall finale, “Monster,” Ruzek’s predicament and what lies in his future. Flueger wouldn’t say, of course, what will happen to Ruzek when the show returns with “Rabbit Hole,” airing at 10/9c on NBC.

“Ruzek’s in a hell of a lot of trouble,” he teased. “Come back and see how much.”

How shocked were you to find out about Ruzek might become a snitch earlier in the season?

When they initially told me—I’m not gonna lie—I was pretty nervous. First question I asked was, “Do I die?”

When I found out … that he started snitching to protect his family, I understood [the idea] a lot better. It seems to me, just from what I’ve seen on social media, that maybe that part of the storyline is a little lost on the audience, but it’s certainly not lost on me playing the character. It’s his family. It’s his nephew and his little sister. She was in a situation that maybe wouldn’t have turned out really bad, but had she gotten the book thrown at her she could have lost her son, at least for a while.

Asking some friends to bend the rules a little bit because, “Hey it’s my kid sister, she had a few too many sips of wine. It’s not like she was hammered, she just blew over the legal limit. Just let her go.” I think when he did that he thought, “This is not that big of a deal, this shit happens all the time.”

Never in his wildest dreams did he think it could’ve gone this far. And when he starts getting threatened, I think, initially he doesn’t know how many of those threats are actually real. But I think he knows he could get punished, he could lose his job, face jail time and see his sister lose her kid. I think that all of that stuff starts to pile up and he starts spiraling out of control a little bit, but still felt like he could handle the situation. That he could give this guy bread crumbs and throw him off the trail a little bit.

So he didn’t go to Voight right away for help because he truly fears Denny Woods is a big threat, right?

I think he knows he’s a threat but I think he honestly thought it was something that he could handle on his own. He’s kind of a cocky guy; so that was obviously very misguided.  But I think he’s also embarrassed that he signed on at all.

Woods puts him in a situation where he starts making a phone call to [expose Ruzek]. The threat is immediate in that situation. And Ruzek says, “Fine, I’ll do it. I’ll do what you need me to do.”

Sometimes it’s just hard to admit to your loved ones that you might betray them. And I think that that’s where he’s at. That the idea of telling them, telling Voight, telling Olinsky, telling Atwater and Halstead and Burgess, telling his CPD family that he was considering putting them in harm’s way—well that’s just something that he can’t stomach. So he thinks like, “It’s fine, I’m gonna handle it, I’m gonna handle it.”

And he does feel a lot of guilt. He’s saving one family by betraying the other family.

He’s riddled with guilt. And that’s what’s been such a joy to play. It’s so much fun to have layers. We actors talk about the different layers that we bring to scenes to make it interesting for us. But it’s not necessarily storylines that the audience is being let in on. It’s just little bits and pieces for us to make it more real. So to have a storyline that the audience is invited in on, that adds layers to every scene.

They can be simple things—watching Burgess go through a situation where she’s got to choose between her new boyfriend, a guy that she really, really cares about, and the unit. If he wasn’t in the situation that he was in he might react to that completely differently. But because he is where he is, his empathy knows no bounds.

The writers have made parallel things happen with other characters that either give Ruzek something to think about.

They kind of mirror the situation. I think Ruzek’s proud of Burgess when she chooses the unit over this boyfriend. But he’s also got his own personal feelings for Burgess that I think that he’s glad to see that she’ll choose him and choose their CPD family over this guy. But I think there’s an element of envy that that was the choice that she made. And he can’t help but reflect back on himself. In that situation, why is she making this choice? “I couldn’t make the choice.”

I would argue that your sister and your nephew are a little higher on the list than a boyfriend of a couple months, whether you like him a lot or not. But he envies her position. And he’s proud of her and I think that he can’t help but mirror himself and say, “I wish I would have gone the same route.”

When Ruzek told Woods “Screw you” in the “Monster” episode, I cheered as bit. How did you react reading the script?

I was so excited. Mykelti [Williamson], I love working with this guy. First of all we get along really well, but he’s just a wiley vet, that guy. He’s just so respected. We’re so lucky to have him on the show and then for me to be paired with him. I’m kinda like constantly freaking out about it.

I think that Ruzek is having trouble with the new reform stuff. He came up, didn’t even complete his time at the Academy. He went right to this unit. All of his schooling basically comes from working with Olinsky and working with Voight. These are two of his father figures. These are guys that he looks up to. I think he likes the way that we’ve done business up until now.

This job and this CPD family, I think, are as important to him as his own family. I mean his partner is truly his brother; he’s in love with Burgess. He’s got his two father figures. He’s really close with Halstead and Antonio.

I just think that it was very nice to see that I got to voice all of those things out loud. And I think you can see in the scene for Ruzek it’s incredibly cathartic for him.

You talked about his relationship with Olinsky. The end “Monster” has Olinsky taking Ruzek to Vought. Tell me about that scene for you.

With people Mykelti and Elias Koteas, you’re only as good as the person across from you. When you get the opportunity to work with guys like that it’s just, they made me look like I’m a thousand times better actor than I actually am. Because they just elevate scenes, you know?

Mykelti is different from me because he comes in, I actually don’t know what his process is. But he comes in, he knows what he’s going to do, he knows A, B and C, where he needs to go. And he sticks to that, it’s really impressive. And he’ll dance outside of the lines a little bit, but he makes incredibly strong choices and he sticks with them.

Whereas Elias and I work very similarly. What turns us on about acting is trying to find something new, trying to be spontaneous, trying to really live in the moment and let what happens in that moment happen. Man, working with E is just—you just never know what’s going to happen. And it’s really fun.

Plus, he’s such a sweet, generous actor. We always check in with each other like, “How are you feeling, what do you think?” Doing scenes that are so heartfelt with him are like acting while hugging. That’s legit the best way I can put it. We just have a really nice time together. And that one, that brought tears to my eyes a couple times, running through that scene because Olinsky doesn’t talk like that.

He doesn’t just willy nilly say, “You’re like a son to me.” I think that Ruzek knew that he probably felt that way on some level but never, ever in a million years thought he would say it to him out loud. I think that the level of guilt that he’s felt only goes up and the level of heartbreak that he’s feeling over the fact that he’s not going to be around these people anymore [saddens him].

And the scene and episode end with Voight.

And then it ends with Voight, yeah.

We’ve seen someone is brought to Voight in the dark alley or a dark place like that. Was it odd you being the one who was having the meeting?