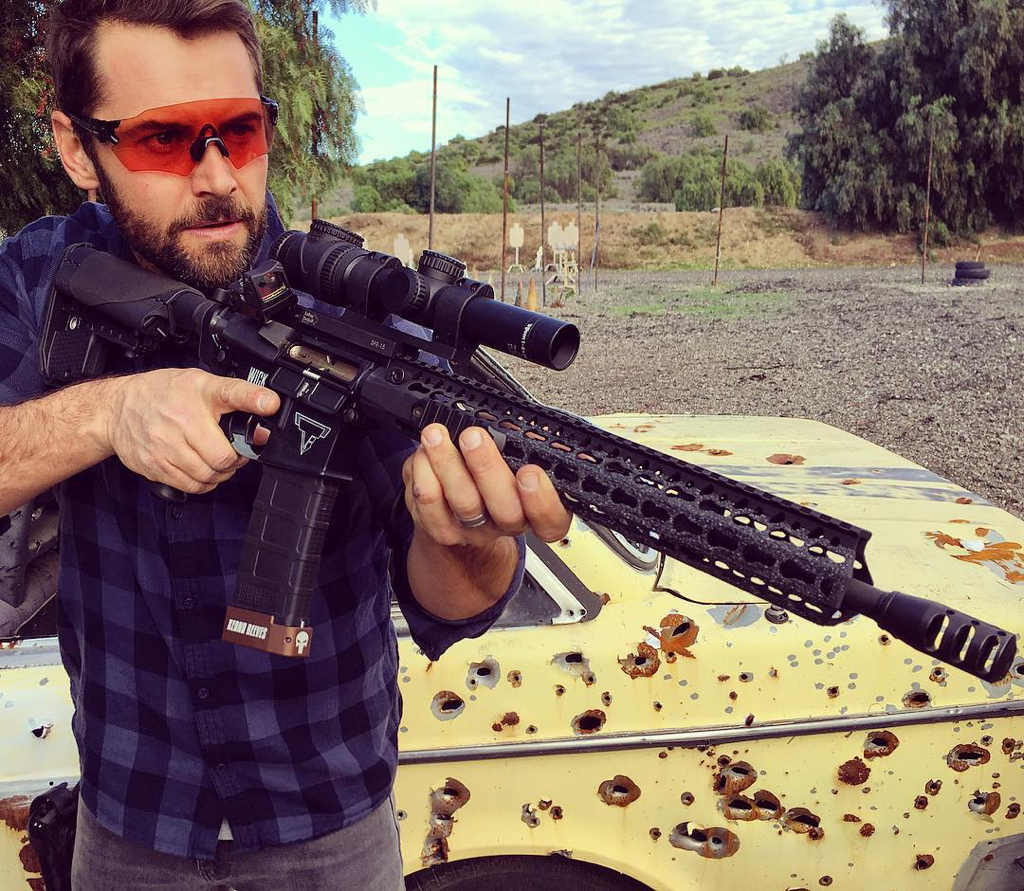 Daniel MacPherson takes on ‘Strike Back’

Daniel MacPherson didn’t waste any time preparing for his next role—as a counterterrorism operative in the upcoming revival of the military action series Strike Back.

Just weeks after they were cast, MacPherson hosted British actor Brown in his California home so the actors could get to know each other. He’s been doing shooting drills at Mike Raahauge Shooting Enterprises. He even celebrated Australia Day with his Aussie co-star, Sumarwata, with weapons training at a gun range run by Taran Tactical Innovations, a company that works with Hollywood productions on weapons handling.

The veteran Ironman triathlete also trains in the gym twice a day and is devouring a special diet. His “Strike Back” prep seems to be changing his and wife Zoe Ventoura’s routine.

MacPherson has big shoes to fill after Philip Winchester and Sullivan Stapleton led the show for four seasons on Cinemax after the initial British season. They played operatives Stonebridge and Scott, who worked for the fictional Section 20 counterintelligence unit that took on high-risk operations around the world. The easy chemistry between Winchester and Stapleton largely contributed to the success of “Strike Back,” along with their mastery of military skills and physicality.

Michael J. Bassett, who directed, produced and helped write many of their episodes, returns for the new iteration. He promises the fifth season will honor all the past seasons.

“No one can replay Phil and Sully,” he wrote in an email. “They were lightning in a bottle together and I don’t want to do anything to undermine that fantastic legacy.”

Bassett is among many of the original team working on the new season, which comes from Cinemax, UK collaborator Sky and production company Left Bank Pictures.

In the new season, the discredited Section program is revived in order to find a notorious terrorist who has escaped incarceration. As the operatives hunt him, they uncover a conspiracy that could change modern warfare. Nothing is ever straightforward for Section 20.

“I just had a feeling he’d be right,” Bassett wrote. “Quite apart from the fact that he’s one tough guy, with all his Ironman competitions, he’s got a humanity and wit about him that just punched through.”

MacPherson portrays loner Samuel Wyatt, a witty barroom philosopher reluctant to work with the restored Section 20. Brown plays Daniel “Mac” Macallister, who is as easygoing as he is deadly. He’s driven by a desire to avenge the team he’s lost.

McKee stars as Natalie Roberts, a military brat and expert psychological profiler. Finally, Sumarwata portrays Gracie Novin, a blunt techie who is the heart and soul of the team.

“I consciously looked to separate the new team from old with a different vibe and energy,” Bassett added. “Dan and the new team are going to do that. We’re not getting Scott and Stonebridge lite, we’re getting a new set of characters who will play in the same world but do things their own way.”

MacPherson knows he and the new cast have a lot of work to do before filming begins sometime in April. But after meeting Winchester in January while both were filming in Chicago, he’s eager to put in the hours.

“Make no mistake,” he said, “when the camera rolls, I will be ready.”

MacPherson and I talked more about the role, meeting Winchester and what he has been doing to prepare.

This is the second part of my interview. Read Part 1 in which MacPherson talks about “APB” and his past roles. Also, you can follow MacPherson’s preparations for “Strike Back” on his Instagram.

Congratulations on “Strike Back.” Very excited for you.

Thank you very much.

Did you get to see Philip Winchester while you were filming “APB” in Chicago?

I met Phil on the “APB” set, so not long after I got the job. I auditioned for “APB” and “Strike Back” in the same week last year and it must have been a good week since I got both of those jobs, which was nice. Something was working that week.

I flew to London for a week during the time that I wasn’t required on set at “APB” and did a week of chemistry reads, military training and the final audition process for “Strike Back.” I actually found out about “Strike Back” as I was flying home from Chicago a couple of weeks later, so those two jobs have been really intertwined for me.

So this 6-foot-2, Tom Ford-model lad—a shining ray of charisma—comes striding through the “APB” set and walks up to me. He’s high-fiving the crew because they all know him and love him, and now I know why. We shared a hug. We got to have a great little catch up.

Did he offer you any advice?

Not so much advice as just laughing and saying what fun we’d have. He and Sullivan and everybody that’s been involved with the show previously have just been great. “We are so jealous. You’re going to have the best time,” they say. I can’t wait.

Michael Bassett is going to kick your ass, but from what Phil and Sully and others have told me, you’ll love every minute of it.

Yeah, right. … We’re certainly putting in the work. We don’t start pre-production for another few weeks yet, but I’ve just finished my second breakfast in the car, my wife’s about to drop me to the second training session of the day.

You’re already doing all kinds of training then?

Also, those guys were so sharp in their weapons skills and their abilities and their skill sets that I think they’ve actually raised the bar for Warren and I. We have to at least start at that point. So it’s not often you get four or five months to prepare for a role. I’m using every spare moment I can to prep for “Strike Back.”

You have all of that Iron Man training under your belt, so you should be all right, right?

[Laughs.] That covers the mental aspects, I reckon, because there are a lot of similarities to special forces operators or special op[erations] guys—that ability to just suck it up when it’s really unpleasant and just get on with the job. I love the physical stuff. That’s one of the things I really loved about “Shannara.” We were trained on set every day by the team behind “Spartacus” down there in New Zealand. That was great. That physical side of the work is something I love and I’m just super excited to get hands on and get out there on set. Anything I can do weapons wise, martial arts wise …

You know Alin; have you met your other castmates?

I have to send out props to Warren Brown, who is an exceptional actor. We hadn’t met until the chemistry reads in London. “Luther” is my favorite show. So Warren walked in and I did a double take. Suddenly I got really nervous and was like, “Shit that’s the guy from ‘Luther;’ I love that guy. I love that show.” Fortunately enough, he’s one of the nicest guys in the world. We got on like a house on fire straight away.

“Strike Back” had all that great ass-kicking, but Phil and Sully had amazing chemistry, too.

When Warren and I learned that we were going to be working together, he jumped on a plane out to L.A. and slept on a blow-up mattress in my one-bedroom apartment for a week while my wife was back in Australia. We just hung out, went hiking, went running, went drinking beer, went down to the gun range and just started our journey together. That chemistry and that comradery are already very strong. That’s the stuff that I think that’s going to be very important in a show like “Strike Back.”

I have an email here from Michael in which he wrote about you, “He’s the most charming, athletic and devilishly handsome fella.  Some people you just want to hate—but can’t.”

Tell me about your character, Samuel Wyatt.

I immediately fell in love with this character on the page. There are some characters that … you’ve seen them before. They’re rehashes of things you’ve seen or heard before. Wyatt immediately was so complex and so multi-dimensional, and so true to life. The more I study and the more I research about military veterans, both here in the U.S. and the UK and Australia, the more I believe this guy is going to be a great representation of them. It’s something I take on with a great amount of responsibility. But also, he’s going to be a lot of fun. He has a quick wit, but it’s all going to be hiding some of those deeper layers.