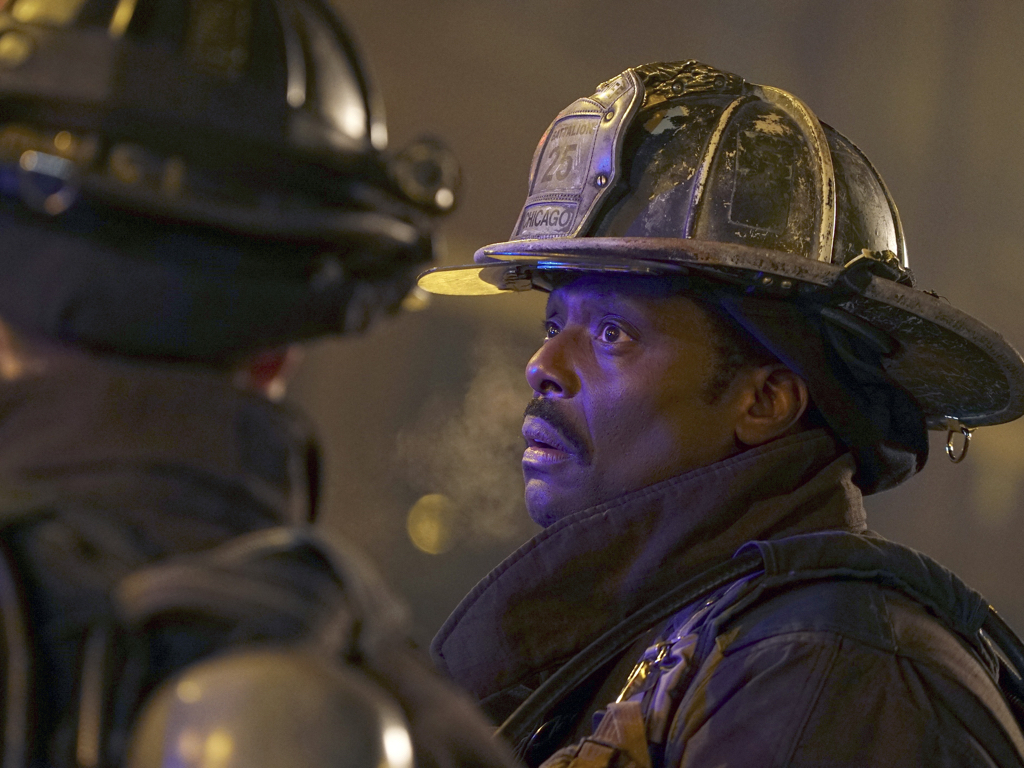 Much like Chief Wallace Boden, his character on NBC’s Chicago Fire, Eamonn Walker eagerly praises his One Chicago family.

While promoting the latest crossover event, Walker raved about the work of cast and crew from his show as well “Chicago P.D.,” “Chicago Med” and the newbie in town, “Chicago Justice.” The three-hour crossover that begins at 8/7c March 1 includes cast members from all the shows.

Calling the One Chicago family “very lucky people” for getting to be part of TV history imagined by franchise visionary Dick Wolf, Walker suggested what’s happening March 1 is unprecedented.

“To have four different shows, all in one night, hour after hour, from the same world? I don’t know if anybody’s ever done that,” he said. “This is American television history in the making.”

If my research is accurate, he’s right. The CW has done a four-show crossover with “Supergirl,” “The Flash,” “Arrow” and “Legends of Tomorrow.” But those episodes aired on different nights over a single week—and the setting of each show is different.

“That’s what is exciting,” he added. “We all know we’re in the middle of something that is going to be copied later on by somebody else.”

The crossover starts with a combination of “Fire” and “Med”—FireMed as Walker calls it. Firehouse 51 fights a harrowing warehouse fire that kills dozens and seriously injures Det. Olinsky’s daughter, who is treated at Chicago Med.

In the “P.D.” hour, the Intelligence Unit investigates the case, looking into the building’s owner, people who were inside the warehouse and a string of potential arsonists.

The third hour introduces “Chicago Justice,” which begins its regular night at 9/8c March 5. In the crossover, ADA Peter Stone (Philip Winchester) faces a tough courtroom battle when the suspect’s high-powered attorney tries every trick in the book to earn and acquittal.

Walker, who worked previously with Winchester on an episode of “Strike Back,” looks forward to watching the new series.

“I’m very happy he’s landed in our family, which encompasses good people,” Walker said. “His heart is in the right place. He’s a workaholic and I know he’s going to give 150 percent.”

To hear Walker tell it, Winchester and other “Justice” cast members are only the latest additions to a pool of talented actors working on all four shows.

He has a special admiration for the work Elias Koteas, who plays Det. Alvin Olinsky on “P.D.,” does in the crossover.

“Elias Koteas’s performance is going to knock people off their chairs. He’s so good,” Walker said. “He’s going to break your heart.”

The first hour of the crossover gives viewers another look at the friendship between the two veteran first responders, which came about because Walker and Koteas wanted to work together.

According to the backstory co-creator Matt Olmstead came up with, the characters started their careers in Chicago about the same time. The longtime friends often drink together, swapping stories about their work and lives, Walker said.

Walker said that friendship is a “driving force” in the first hour of the crossover.

In one scene, Olinsky pleads with Boden to allow firefighters into the burning warehouse to find his missing daughter.

“I’m really happy about that because it takes it out of the realm of what [viewers] are used to with Boden,” he said. “He’s not just outside barking orders. Not only do I go inside, I’m emotionally attached to an old friend.”

Production used a building at the corner of W. Lake Street and N. Kostner Ave. for exterior shots of the warehouse blaze.

The show filmed in that location for a week, Walker said, with at least a thousand extras over the week and a lot of real fires. As viewers will see, the fire spreads to the roof and several windows of the building.

Walker believes the location shoot outdoes the one in the series pilot five years ago. And, he said, it was cold outside but hot by the flames.

“It’s so life-like. Everything is set up to throw fire at you and that’s really disconcerting,” he said. “When they crank it up all the way and say shoot, you think, ‘We can’t have a green screen? This shit is hot!’ ”

But if fans drive by the location, they aren’t going to find a burned out husk of a building. As Walker said, “They set the buildings on fire, but they don’t burn.”

Special effects coordinator John Milinac and his team created dozens of fires and explosions for the crossover, both for the exterior shoots and inside the building. Production designer Craig Jackson and his crew built the interior of the burning warehouse on a soundstage at Cinespace Chicago Film Studios.

Walker has nothing but appreciation for the dedication of Jackson, Milinac and their crews.

“Craig and John as a dynamic duo deserve an award for the stuff that they’ve done,” Walker said. “They are scientifically keeping us safe with every [fire]. Week-in and week-out … we rely on them to keep us safe.

“Yes, it looks amazing. And yes, it’s real fire. And we aren’t burnt.”

As much as Walker supports his entire One Chicago family—“P.D.,” “Med” and “Justice”—it’s obvious the cast and crew of “Chicago Fire” hold a special place in his heart.

“Our crew and cast work hard. I know we arrived first, but I’m going to say we’re the best,” he said. “[It’s] one world I know, but mine are the best.”

“I like my people, what can I tell you?” he added with a laugh. “I’m not unlike Boden.”