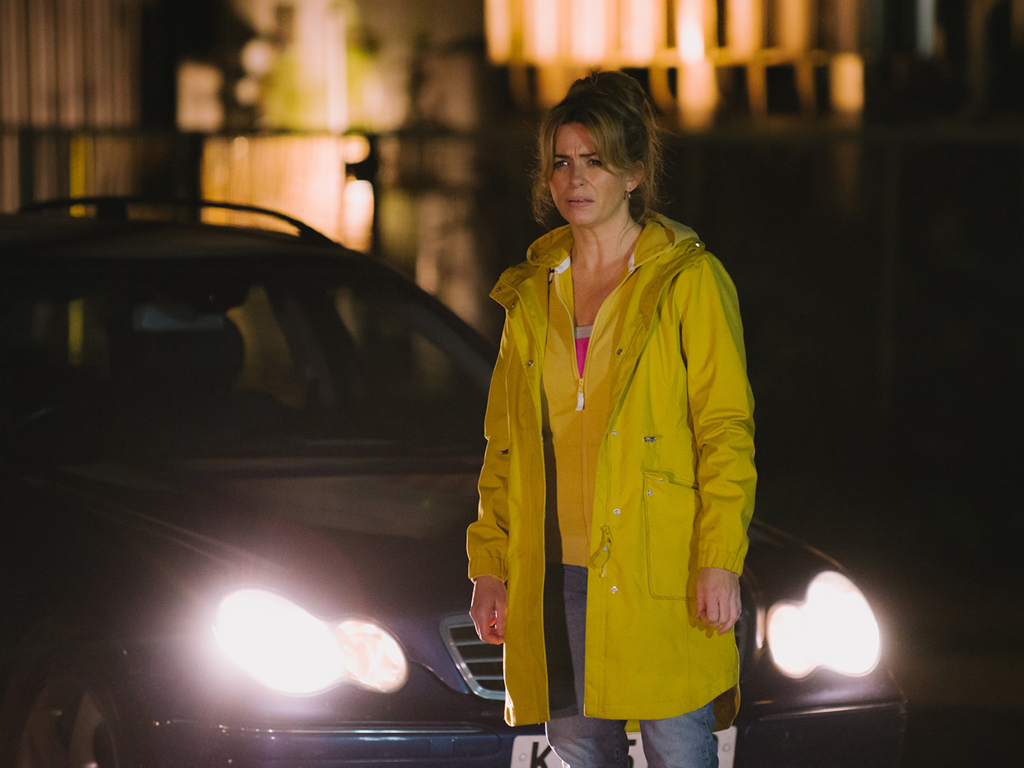 Eve Myles fell in love with the script for her latest series, Keeping Faith, but the former Torchwood star nearly passed on the project because producers planned to film it in both English and Welsh.

“The biggest challenge of all, of course, was doing it in two languages, one of which I don’t speak,” said Myles, who was born and raised in Wales, but didn’t grow up in a family that spoke the local language.

The eight-episode mystery—in English—begins streaming May 7 on Acorn TV in the U.S. It’s already a huge hit in Wales, where it aired in Welsh on S4C/BBC Wales and became the most watched program there in 28 years. It also broke records on BBC’s iPlayer service with between 8 and 9 million downloads.

Myles stars as Faith Howells, a lawyer on maternity leave after having her third child with her law partner and husband, Evan (Bradley Freegard, Myles’ real-life hubby). But Faith’s leave and happy life ends when Evan leaves for work one day and never returns. As the police and townspeople begin to suspect Faith of wrongdoing, she launches her own investigation into Evan’s disappearance that leads her to some dark and dangerous secrets.

When producer and director Pip Broughton showed her the script by Matthew Hall, Myles knew the role—and the extra language challenge—would help her shake away the boredom she was feeling about her acting career after being offered the same types of roles over and over.

So learn Welsh she did, with no regrets.

“I had to stop crying about it and learn it,” she said. “I knew if I didn’t get over it and get on with it, somebody else would do it. And in five years time I’d be mad that I hadn’t pushed myself.”

I spoke with Myles about Faith, how the project revived her love for acting, working with her husband and how she learned more than just Welsh while filming .

Congratulations on the success of the show. It’s breaking records.
Everyday it seems to be growing. And all we did was make a really good drama, tell a really good story and be honest with it. We kept it truthful and grounded and magical. Basically we showcased what Wales can produce. And we knew we could produce something great.

What originally attracted you to it?
I needed to be challenged because I was going out of my mind with boredom. I had to fall back in love with what I trained to do and needed something to scare me and to invigorate me and to get my juices flowing again.

To play this modern, realistic woman is any actor’s dream. Faith Howells is a normal woman in her late 30s, a mother of three young children who is smart and as sharp as a razor. …

It sounds as if you, like Faith, went outside your comfort zone.
I guess so. I think only when you’re taken out of your comfort zone and you survive and you can still surprise yourself, it’s only then you realize that, “My God, I wish this had happened maybe 10 years ago.”

But that’s the thing: A Faith Howells only comes around once in a lifetime for an actor. I had to grab it with two hands. … I’m an adrenaline junkie, I’m an actor. It’s taught me to be completely unapologetic for my craft.

This was bloody hard work for the crew, for the cast, for the directors, for production. But it’s taught me so many things—that hard work pays off and after [the work] you’ll feel better about yourself and your craft and your life.

Are you happy you learned Welsh?
Yes, I am. Believe me, I can go to any shop now in my country and I know what they’re arguing about. And I can join in.

How does Faith change over the course of the season?
The story takes place over just a week, but so much happens. Every scene was a challenge … because myself and Pip Broughton, who’s the director, wanted every scene to count. No scene was filler. Every scene had a purpose and a power to it—and a message.

Faith goes on a rollercoaster. She goes from being exhilarated and happy and warm and safe to fearful and terrified within … a scene. She’s in dire straights.

So she’s got a battle with her guilt over that and what kind of parent she is and what the future holds … Everything is up in the air. She’s constantly questioning. She’s constantly finding out things that she shouldn’t find out. It’s exhausting for her.

She really does take a lot of gut punches throughout the season.
She does. This character appeals to me so much because characters are constantly being knocked to the ground and getting up one way or another. But, you very rarely see a female, a mum of three, in a small community getting kicked as much as Faith Howells does, and getting back up.

I think that’s what’s resonated with people and that’s why the show has become addictive.

You play Faith in a physical way. For example, when Faith talks to the husband’s therapist, she pulls on a leather strap attached to the couch. Is that action written in the script or are you just finding that when the character takes over?
None of that’s in the script. We just play scene in the moment. Pip is a world-class theater director who is about being in the moment and creating metaphors.

And where Faith is at in that moment, for her anything is a diversion from the truth. In another scene, in her office, there was a tear in the wallpaper nearby, and I just started smoothing that break. I guess it symbolizes everything that’s going on with Faith. She’s holding on for dear life.

If I were to watch an episode of the Welsh version and then the same episode of the English, would they be slightly different? Was it sort of like when you’re theater acting, the performance changes some every night?
You try to keep the geography of it as similar as possible. A, B, and C have to happen. But every time you went in to do a scene, it had to feel real.

The creative process is very organic with this show because we went for hyper realism. What is so phenomenal is that they trusted us and we had a great relationship and we could come off script and jump around. The only time we’d get a bullockin’—we would get told off—was when we did the scene too clean and like a normal drama. She hated anything that wasn’t messy, like if our lines weren’t talked over like we do in real life. Pip didn’t want it to sound or feel like a drama. She wanted it to look like a piece of life.

The only thing that we tried to do every time was to make sure that that scene is brilliant.

How was it working with your husband? With Bradley?
It was great. It was like having the best support. He’s a brilliant actor. I’m really happy for him because it’s a really big part for him and a really big break for him and he deserves it. And yeah, I’m just really pleased to be a part of it and share it with him. He’s a super good actor. I think it would’ve been very different if it had been somebody else. I’m blessed to have him by my side.

Interviews with other Brits