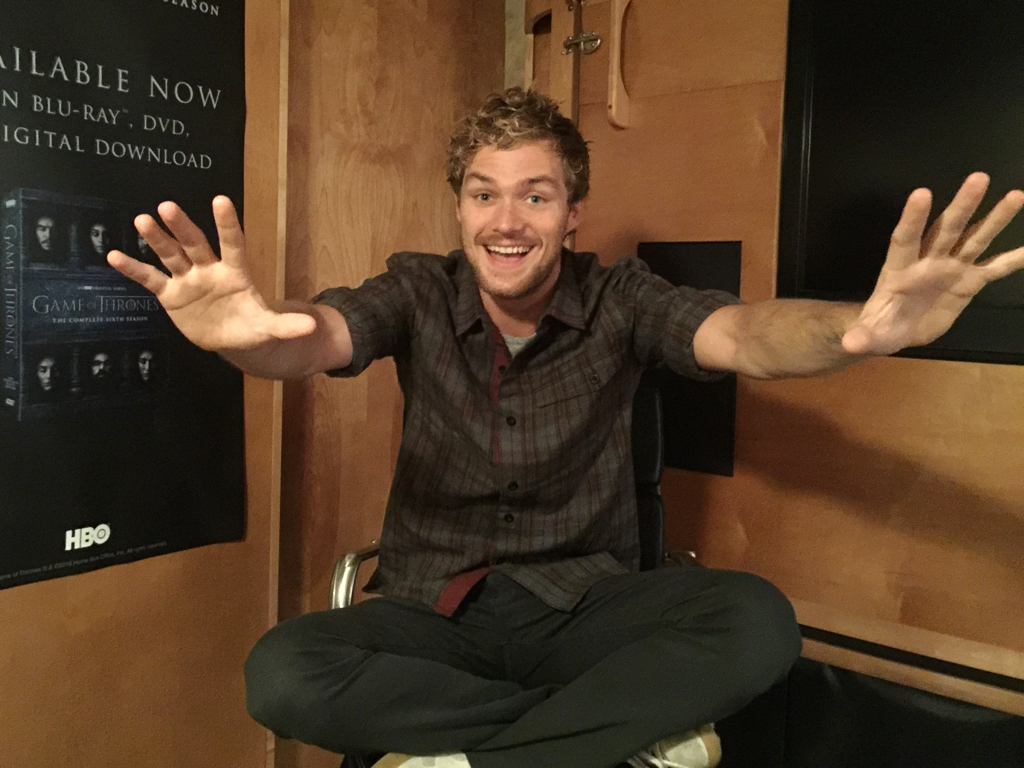 Finn Jones took off his Knight of Flowers armor more than a year ago and hasn’t looked back. He hasn’t had time since signing on to play Iron Fist.

The British actor reflected on his six years playing Ser Loras Tyrell in HBO’s “Game of Thrones” during the recent Chicago stop of the “Game of Thrones” Behind-the-Scenes fan experience to support the Season 6 DVD/Blu-ray release.

During our conversation, Jones also teased “Marvel’s Iron Fist,” coming March 17 to Netflix. He plays Danny Rand, aka Iron Fist, in that series and “The Defenders.”

Spoilers ahead if you aren’t caught up with“Game of Thrones!”

Finn Jones was OK with leaving “Game of Thrones.” (Macall B. Polay/HBO)

Are you sad to be done with “Game of Thrones?”

No, not really. I was actually really happy with the ending. And I did the show for six years. Now I’m doing a new show; I’m playing Iron Fist. If I was in a position where I didn’t have any work and I was just sitting at home, then I would be sad because it does feel weird that I’m not there with everyone. But I’m doing equally awesome things on this side of the pond.

To be honest I’ve not even thought about “Game of Thrones” since starting this new job. I’m in Marvel since March. Coming to do this thing six months later, I’m like, “Fuck. ‘Game of Thrones?’ Wow.” It feels like a lifetime ago.

It’s a little bit sad that I’m not there with everyone and being involved in it because I’ve been doing it for six years, but I’m happy. I did it for a long time. It was time to move on and do something new, I think.

Do you find that any experience is just a feather in your cap in that you learn so much and you’re always onward and upward?

Totally, yeah. I learned a whole load being on “Game of Thrones” and working with such a diverse range of actors from the kids—they were kids, like Sophie [Turner] and Maisie [Williams]—to Diana Rigg and Charles Dance. Then even working with Natalie [Dormer] and Lena [Headey] and Gethin [Anthony]. Having that broad range of actors to work with really taught me how to conduct myself. I was able to pick up tips from those guys. It was a great learning ground for me. Just to be in something so huge as “Game of Thrones” was—yeah, it was fun.

I always wanted to see more of Ser Loras. And then in the end he didn’t get treated very well.

He didn’t get treated very well at all. [Laughs.]  … Look, the show is massive, and it’s got a bunch of characters that we need to focus on. It would have been nice, I think, to really flesh out Loras’ character more and see what was really going on behind the scenes with him, to see what did happen down in those dungeon cells.

I actually would have liked to see Brother Loras, and to see where that character went after he’d been turned into one of the brotherhood. What would have happened then if he hadn’t have died? … I think it would have been really interesting to take this warrior that has completely gone from Dude of Westeros to a complete downfall. Where would all that vengeance inside of him take him? That would have been interesting.

But the show is coming to an end, and they needed to clear out a bunch of characters to make way for Daenerys. [Laughs.]

Well, Loras did have quite a dramatic death.

Oh, it was fantastic.

It was perfect for Lena’s character—that Cersei would go there.

They’ve set her up now as the ultimate baddie. Now she’s got no family, nothing to keep her goodness.

Worse than the mad king, yeah. It’s great for her. I love what the director Miguel [Sapochnik] did with that. That scenario was just incredible. It was a work of art the way he constructed it and pulled it together.

Finn Jones has been training for “Marvel’s Iron Fist” on Netflix. (Netflix)

How has the transition from Westeros to the Marvel universe been?

It’s been really good, actually. Miguel, who directed [GoT] Episodes 9 and 10, came onto “Iron Fist” and directed an episode for us as well. So the transition feels very fluid; I’m working with the same directors. It’s a genre piece as well, so I’m still kind of in that world. It’s been great. I really think the six years on “Thrones” has set me up to lead my own show and do what I’m doing now.

What kind of training have you done?

A lot. [Laughs.] It’s been intense, a lot of fighting.

Charlie Cox told me that when he first started training for “Daredevil” he could barely move.

Will the work pay off? I don’t know. I’m waiting to see when it comes out, but it’s been a lot of fun doing it. It’s a really great team over there, and all the crew and all the cast are really fantastic people. It’s a good story. The story we’re telling is great.

The beauty of these Marvel shows, especially the ones on Netflix, is that they are all so grounded and real. They’re not cartoony.

They have taste. They’re grounded and they’re driven. They’re not hokey. They try to tackle the superhero issues but also social issues.

They do an amazing job with those issues.

What issues does “Iron Fist” tackle?

Has our recent election changed anything? Are you guys already done filming?

We finished before that. It will be really interesting to see if we get a Season 2; what more social issues can we comment on having someone like Trump in power? I think our show is going to be very relevant by the time it comes out.

Game of Thrones Season 6, Inside the Episode #10