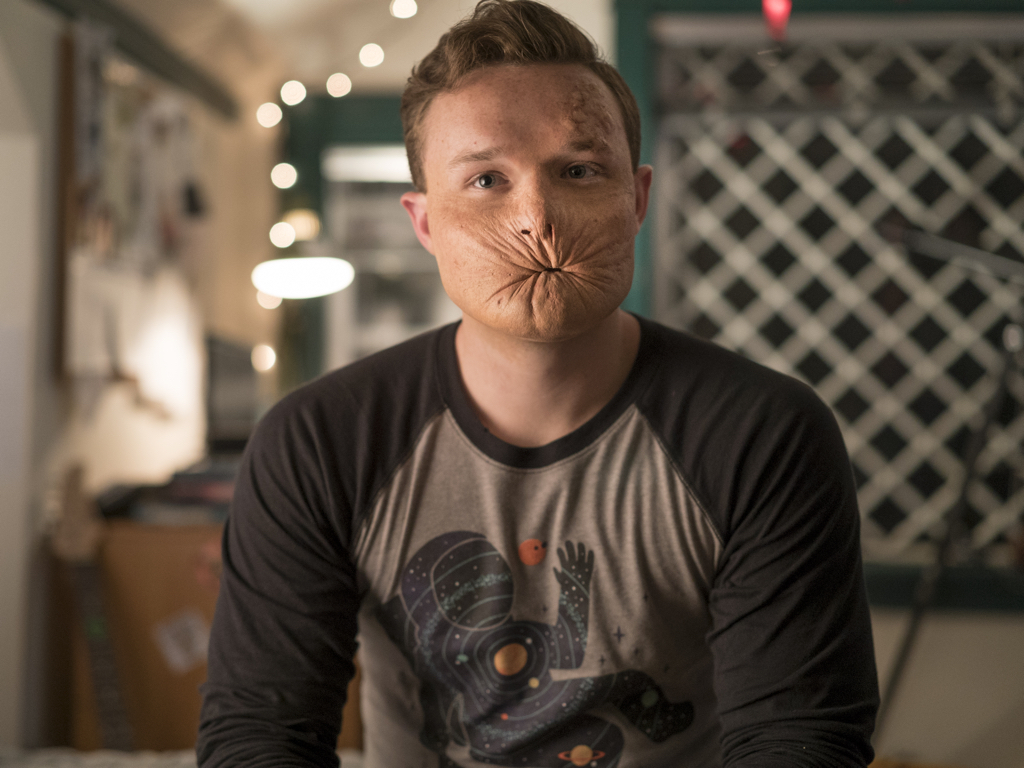 Ian Colletti is going above and beyond for AMC’s Preacher, acting through a thick rubber facial prosthetic that took hours to apply. But the actor says the extra work will pay off if viewers are able to look past Eugene Root’s horribly disfigured face.

“Hopefully fans will eventually see him as a human being,” Colletti said during a recent phone interview. “People are more than their disfigurement. That lesson is just applicable to life. It’s important not to judge people by what they look like or how different they are from ourselves.”

Called “Arseface” due to the nature of his facial mutilation, Eugene is both the butt of jokes and a reviled Frankenstein’s monster in Annville, Texas. Yet the abuse he endures from his neighbors pales in comparison to Eugene’s inner conflict. Troubled by something he’s done, he fears God might have turned against him.

Despite all this, Eugene remains a sweet, gentle young man who seeks the advice of the local preacher, Jesse Custer (Dominic Cooper), who has major issues of his own involving possession, a vampire and a pissed off ex.

“Tune in if you want to see something that is absolutely ridiculous and insane and dark and twisted, yet somehow hilariously funny,” Colletti said.

Colletti and I discussed his love for Eugene, how he managed to act through that mask and how closely the TV adaptation by Seth Rogen, Evan Goldberg and Sam Catlin will follow Garth Ennis’s 1990s comic book.

How excited are you about getting this role?

Ian Colletti: I was thrilled. I was’t super familiar with the comic books before even the first audition, but obviously when a character named Arseface came through, I was like, “I need to know a little bit more about this.” I did a ton of research about it and I was floored by the source material. And the pilot, I thought, was amazing. When I was given the opportunity to play the part I was thrilled.

What specifics about the character do you really like?

Arseface is really just this kind of iconic comic-book character. To be able to kind of bring him to life onscreen was simultaneously terrifying and very exciting, because I think in our show there are serious opportunities to turn Arseface, or Eugene, into a very human and empathetic character. People actually can relate to and he’s not just a prop or the butt of the jokes, for lack of a better phrase. Rather he’s a very empathetic and complicated character.

There are a lot of, I suppose, elements of comedy—dark comedy—surrounding him. But actually his story is really kind of tragic.

That would be a great summation of the overall tone of our show. I think there’s a very dark, twisted nature to it, but I think we somehow find a way to really bring humor out of that in the same way that they do the comics. I think that happens with anything in life. The greatest part about drama is finding the light or comedic moments as well as the real, human moments. I think we find a great middle ground that for however dark and twisted it is, it’s very funny and real.

Eugene is a super sweet kid despite all the things that have happened to him and how people treat him. How do you get into the head space of this kid who isn’t treated very well?

Dominic Cooper is an incredibly talented actor. I think when he comes on set he definitely raises everybody’s game. I think a lot of times you’re really as good as the people you’re working with, and I’m very fortunate to work with an incredibly talented cast that have helped me up my game. They really helped me kind of bring Eugene to life. It’s been a very fun and rewarding experience.

Has playing Eugene sort of changed your outlook on how you or others treat people?

Obviously the first thing people notice out of the gate is Eugene’s disfigurement, but my primary goal playing this character was to make him so human and relatable and empathetic that as the season progresses people begin to not see him just for his deformity, but begin to see him as a very real human being.

Speaking of that makeup, how long were you in the chair?

We’ve got it down faster and faster. It’s about on average 2 to 2 1/2 hours to get into the prosthetic and the makeup. It’s very crazy. There are some amazing people and artists who have kind of brought Arseface to life. So it’s very collaborative and I am very grateful to be a part of it.

Did you find it difficult to act in the prosthetics?

It definitely complicates things. As an actor, your face is your greatest tool—and about the whole bottom half of my face from my nose below is covered in the prosthetic. A lot of the performance I’ve really had to keep in my eyes and communicate through my eyes. There is movement with the prosthetic so whenever I have it on I take the opportunity to look in the mirror and work on how to distort my face to get more subtle emotions to read through that thick foam. But it’s been a very interesting challenge. It’s been quite fun.

I was going to ask if you spent time in front of the mirror.

Sometimes I have to exaggerate my actual facial reactions, to flex it in a way that reads as more subtle emotion or subtle tone through the mask. Obviously that has taken a bit of practice, but it’s been getting better and better working with the prosthetic as the season has progressed.

You’ve learned a new skill. Add it to your resume.

Yes! We’ve made tweaks and adjustments to the mask to make it a bit easier to act in and communicate through. It’s been a process, but it’s been quite interesting.

Did you just not eat for 12 hours of filming a day?

I can’t eat when I’m wearing it. There are some pretty huge sequences later on in the series that required some crazy days of 20 hours. That was very difficult not to be able to eat solid food, but we got some amazing footage and the sacrifice was definitely worth it for the content that we’ve produced.

Did the prosthetic help you to speak like him, or was that something you just did?

You know what, it didn’t actually affect my speech. A lot of it is just kind of the voice that I created for the character.

Will you be singing as Eugene? I’ve seen your YouTube videos.

Yeah, I think there maybe a few videos online. I would say when it comes to characters and plot lines, give the show time to kind of come into its own. We definitely have opportunities to get there.

It’s funny, Seth and Evan didn’t realize this but I’m actually a musician; I played guitar for about 12 years and I’m a singer and songwriter. They found out because one day there was a guitar prop onset and I picked it up and tuned it up and started shredding a little bit it. They were quite excited. So I think there are definitely some serious avenues to explore in the future with kind of bringing out “Arseface, the rock star.”

It’s been 20 years since Garth Ennis wrote the comic. Do the references to Nirvana and Eugene’s love of Kurt Cobain figure in your show?

When it comes to backstory we’re going to explore that as the season progresses and give a little bit more hints to that. For whatever we lack in panel accuracy we have an accuracy of the tone and overall essence of the characters and the series. So when it comes to the specifics, we’ll get there.

Garth told me he understands changes have to be made for the show and is OK with it.

He was very complementary of the series. He really liked it and was complimentary of kind of our interpretations of the characters. And if he’s happy, I’m quite happy.

Filming an intense show like this, do you find that the off-camera time is more hijinks filled?

I have that horrible prosthetic on my face, so I’m kind of in the zone for most of the day. But yeah man, we’ve all become such great friends and it’s been a real fun job.

What was the most fun part of the experience for you?

I don’t think I can tell you that yet. We’ve got some really amazing stuff coming down the line that was very, very fun to shoot, very challenging but very fun. But yeah, unfortunately I can’t really talk about that yet.

Please give me your pitch for the show?

To all the fans, I promise the essence and tones of these characters that you love in the comics will very much prevail in our series. It’s been a real pleasure to bring that to life.