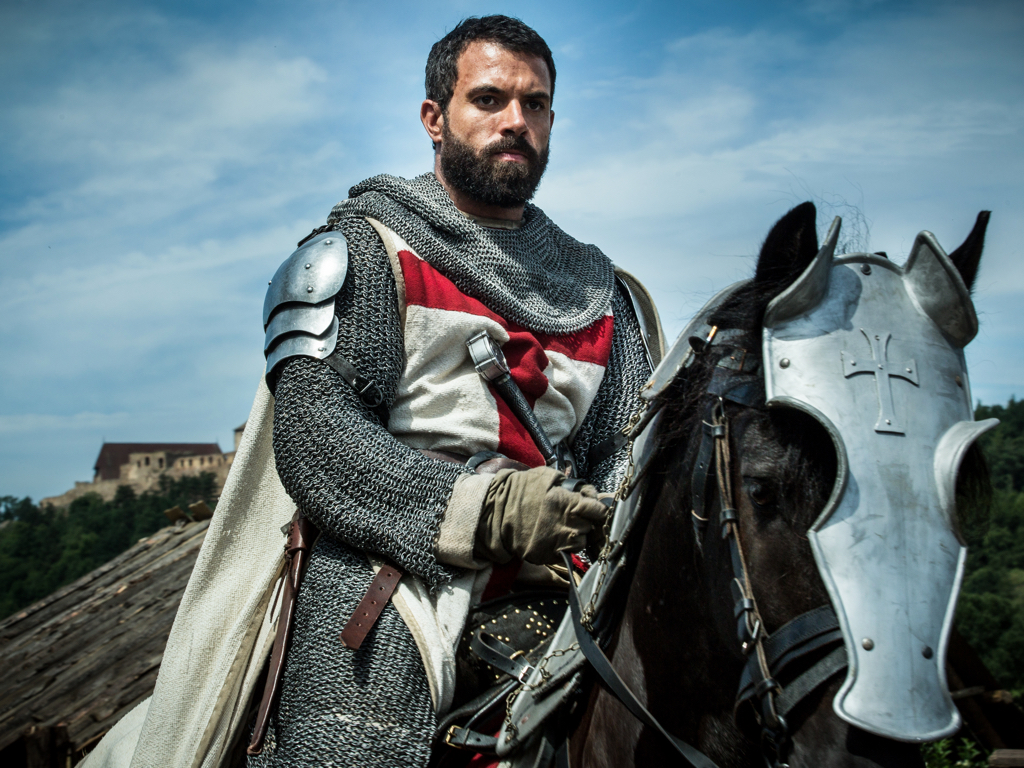 Tom Cullen knew he’d have to train to fight as a member of the Knights Templar in Knightfall, he just wasn’t expecting to have to act wearing authentic chain mail.

“I remember putting the costume on—chainmail and everything,” he said. “It weighed 50 pounds, which was like an insane amount of weight. I struggled to walk down the corridor to get to the studio.”

By the time he arrived to the studio to do the screen test, where actors pose in front of the camera in full costume to see how everything looks on film, he was ready to sit back down.

“I was like, Guys, why is the costume so heavy? How are we supposed to move and fight in this?’” he said.

Costume designer Diana Cilliers, whom Cullen calls “amazing,” tried to make the armor out of lighter materials like plastic, but nothing but the real thing looked authentic.

And thus, the “Chain Mail Diet” was born. Cullen jokes that filming in his full costume involved long hours and, despite training before filming began, a lot of muscle strain thanks to the costume.

Cullen talked more about the costumes and sets in “Knightfall,” which airs at 10/9c Wednesdays on History.

The clothing looks very accurate and the sets and things like that were very immersive. Did those things help you get into the role?

The costume design, art direction, production design, makeup—all were  so dense and real that you feel like you’re right in it as soon as you turn up on set. It’s just all there for you, and you can really immerse yourself into the world.

The days we spent on set were amazing. We filmed on the biggest sets in Europe at Barrandov Studios. They built medieval Paris. I’ve never seen anything quite like it and in the show I have to do this shot where I’m riding down this nearly 200-meter long street that they built. And there are 350 extras and each extra has a job, each extra has a name. And it’s live, real world and you just forget that the cameras are there because it’s so extraordinary. …

They put us in the most authentic costume that they could and we just had to deal with it. And we got bigger and we got stronger, and so very quickly we were able to run and jump, get on horses in the 50-pound costumes and do everything that we needed to do to play our parts.

But you can see the difference in the way that the costumes move and the way that your body moves in them. It’s just authentic and I think it makes for a very real experience when watching the show.

You talked about your Kim Kardashian workout. Can you talk about how these garments were made and what were some of your favorite things to wear and what they looked like in person?

Unfortunately, I only ever had one costume really which was either with chain mail or without chain mail—but most of the time with chain mail. But Diana made it so that it was completely authentic even in terms of the undergarment underneath the chain mail. So we had a very, very thick heavy muslin underneath like a linen dresser with leather underneath and then the same on our bottom half as well. The chain mail was real metal and so it gave that kind of weight and movement to it.

The tunics were made in the same way that they would have made the fabrics back then. With the things like the crosses they spent a lot of time discussing what cross to use. Templars used many different crosses depending on where they were based, and later in the series, we meet another group of Templars and they have a different cross than what you see me wearing.

… They had a huge workshop at our studios in Prague, with the most incredible costume teams who worked tirelessly. I don’t think people realize how much work it took, because I certainly didn’t realize it. When you have 400 extras on set, the costume team starts work at 2 o’clock in the morning to start dressing all of these men and women so that we’re ready to start filming at 7 a.m. And then they wash all the costumes and they go to bed at an insane hour and they do it in shifts. The work that goes into making 400 beautiful costumes is unprecedented. In terms of the court costumes, I was really jealous because their costumes were incredible.

And Queen Joan and Princess Isabella, played by Olivia Ross and Sabrina Bartlett, their costumes were inspired from real medieval images and fabrics that they had used and they are just unbelievable. Every time I saw Olivia, she was in this new extraordinary costume that Diana fashioned and created out of seemingly thin air in no time. They’re just stunning, stunning, stunning works of art really.

But what is amazing is that the way they were made is the way that they would have made them back then. And Diana was really collaborative as well. I think each of us wanted to have our own unique way in which we wore our costume or we wore our belt or the color of our cross. And so she allowed me to choose the color of my cross and how I would have dyed it.