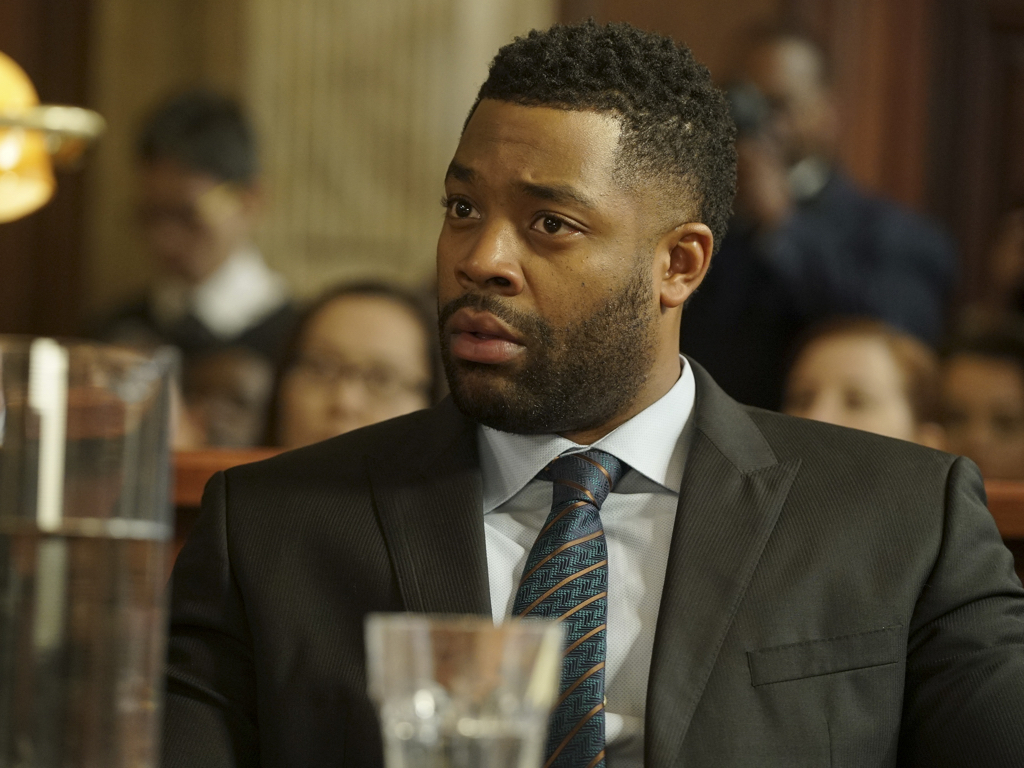 When LaRoyce Hawkins found out he would appear in the Chicago Justice premiere, he didn’t expect the story to revolve around his Chicago P.D. character.

“I think I looked up mid-way through shooting it and it was like ‘This is the biggest episode I’ve ever shot, ever,’ ” Hawkins said. “I don’t get this many lines on my show. I’m not used to talking that much.

In the episode, Atwater arrests a man who later dies while in holding. Atwater is among the suspects the state’s attorney’s office decides to prosecute. The episode touches on the national concern over police brutality and accountability.

Hawkins, a Harvey native, talked more about the episode, Atwater’s future, and that infamous spitting scene from the recent One Chicago crossover involving all four Chicago-shot shows.

This story really hits on current events, doesn’t it?

I think it is an important story. It gives and the audience a chance to look at the gray area of police work and community work that I don’t think we see that often. Atwater was just arresting a young brother … There’s this fine line between doing your job and getting too carried away. Did you play it by the book?

Sometimes we have to go outside of the rules to create positive outcomes for cases. But, when we go outside the rules a little bit and it doesn’t go the way you want it to go, then all hell breaks loose. We find Atwater in the middle of that. He even doubts himself i the situation, but also doubts whether he’s good at his job and a good person period. It’s a great story and I had a lot of fun trying tell it and I was thankful for that opportunity.

A love story wouldn’t be bad at some point for Atwater. But, you know I get knock all this important stuff off first.

You have a great line when Antonio is interviewing you, where you say something like, “Every cop gets accused of wrongdoing; I guess I should, too.”

He’s kind of the only person I can talk to at that moment. I’m breaking down a little bit or just thinking out loud, about how this situation is affecting me. And I’m like, “Man I got the badge on, so I’m guilty either way.” Because of the bad rep and the negative energy that’s coming against cops. …This story deals with that balance, and it was fun to play with that, I hope I pulled it off.

So being in “Justice,” you now get to be in a courtroom setting. How did you like that?

I don’t know how they do it. I think every show has their space that you’re shooting in that gets pretty mundane. We have that in the bullpen scenes. You can shoot in there forever; it’s kind of like shooting in a dungeon sometimes.

The courtroom is worse. And they want to get so many different angles, so many different vibes. And every director wants to do it differently, but there’s no different way. There’s only so many ways to shoot in that room. Sooner or later they’re going to be cranes in there to try to make it look different.

What are your feelings about “Chicago Justice” joining the club?

It’s not just the cop’s perspective anymore. Or you’re not just going to get a doctor’s perspective anymore. We often don’t think about the gray areas between those jobs. To bring them all together and tell all these stories at the same time and have all these different points of view is important and it’s interesting. I think it makes for good TV but, for good life lessons also.

You’re from Harvey, which has a history of corruption city government. Has knowing that history helped you with this role?

I think it definitely helped as a reference. A lot of the corruption or criminal case we deal with on “Chicago P.D.” I identify with it because I’ve seen it in my hometown.

For a long time I kept thinking about the “bad” references I could draw on from Harvey. A lot of the cases hit me close to home, because I’ve seen those situations before.

But I think what my hometown provided best for me was showing me the right thing to do.Atwater, in my humble opinion, is a reflection of my basketball coach, who was also a police officer my freshman year at Thornton.

It took me a couple of seasons to remember the great examples that I had of the police officers that were in my life from Harvey. The ones who actually taught me how to counter all of the bad vibes. I think that’s who Atwater is. I think he’s that cop that’s from Harvey, that looks a certain way. Understands a certain vibe and energy and could read a certain energy well. He also knows how to counter that in a way that’s surprising to most people. I think that’s what people like about Atwater.

He doesn’t look like he’s going to be as understanding or gentle as he is sometimes. He can go there if he has to. I think we’re seeing a lot of aggression out of Atwater lately. But at his core, he just wants to help. He just wants to be someone people can depend on. … He’s going to do his best to do the right thing.

Speaking of aggression, his patience was tested a little in the recent crossover episode when the guy spit in his face. That couldn’t have been fun to shoot.

[Laughs.] I don’t think we’ve seen too many of our main characters get spit on like that. My favorite part about it was actually shooting it. We were trying to come up with interesting ways to get around the actor spitting on me. They were trying to flick spit with a spoon from behind the camera. They just kept on missing. Then they got a straw, but the straw created massive spit. It looked a lot of people spit on Atwater at the same time.

Ultimately we couldn’t really get around it, so we had to do what we had to do. We just had to let the man spit on me. It was the easiest thing to do.

Makes it look real when it is real.

My favorite part was the reaction of Paddy (Patrick John Flueger), who plays Ruzek. That wasn’t necessarily written, but the man spit on me and I looked at Paddy and his reaction was like, “Oh no, no, no, no.”

I love working with him because our chemistry is extremely brotherly because we’re best friends off set, too. I think all of that kind of adds to that moment.

It does. When that situation comes up, does the actor who spit on you apologize?

Really apologetic. He was a good guy, too, a good actor. He didn’t want to do it either. For the sake of not continuing to waste takes, I was like, “Lets just get this done.” Sometimes you got to take that for the team.

How will Atwater’s ordeal in this episode affect him going forward?

It’s not a written thing but I’ve been trying to keep it in mind since I’ve shot that episode. … Hopefully you will see that, but know that certain heroes that we’re used to saving the day still come through and save the day.