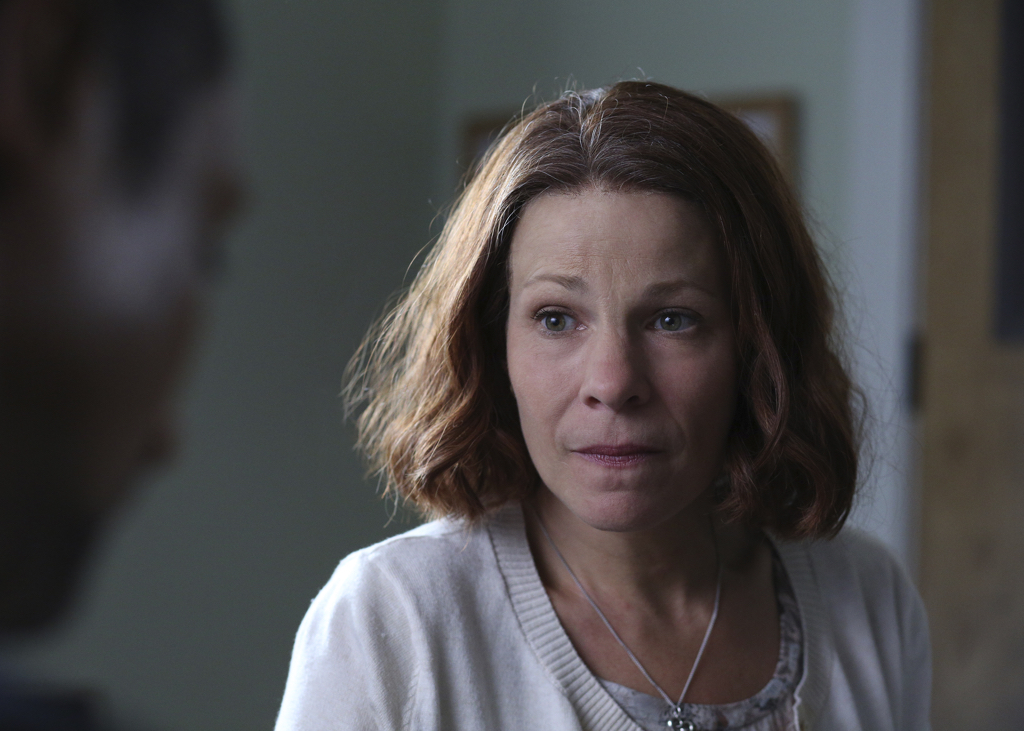 As Anne Blaine, a working-class mom horrified by her son’s claim of being sexually assaulted by members of his exclusive high school’s basketball team, Taylor channels all the rage, confusion and determination of a mother desperate to help her child—even if that child wants her to drop the issue.

I chatted with the Glencoe, Ill., native who studied at the Theatre School at DePaul University and the Piven Theatre Workshop, about the new season, working with creator John Ridley and how much things have changed since she was in high school.

Why did you want to play Anne?

John Ridley drew me [to the project]. I did the first season; he asked if I was interested. And I was because I think he’s terrific. He’s one of the best collaborators I’ve worked with—diversity, talking about relevant stuff, current issues. I loved “The Wire” and this feels a lot like what “The Wire” was doing.

“American Crime” takes on sensitive topics. Is that something that you look for in your projects?

No, not necessarily. What I’m really looking for is mostly the director and the director’s vision and also how well the director collaborates with everybody else. Those are the most important things to me. The collaboration thing—if the vision’s amazing it’s OK if they’re not amazing collaborators, but it just makes it more fun.

Did you know much about male-on-male rape and its prevalence?

Originally [my character] had a daughter. A girl was raped. John changed it and I’m really glad he did because it just makes it a lot more complex. It brings to the forefront an issue that … happens a lot more than I think a lot of us knew. I think it pushes up against some of our own limitations. People who are liberal or—even John said, “I’m a black male. I thought I dealt with my biases”—find it challenging. It sort of pushes buttons in this really interesting way.

The characters here are so complex and, at times, unlikeable even though they are probably doing what anyone, or any mother, might do. And they won’t listen to what could be the truth if it might harm their family.

Exactly. John explores what happens when there’s that kind of rigidity. Good things don’t happen from that.

Your character’s desire to protect her son and seek justice doesn’t sit well with her son, does it?

It’s tricky. She’s not really listening anymore. She is getting caught up in principles. But it’s always important to also see the human being in front of you while you’re dealing with the principles and to weigh his feelings. I don’t know if she’s weighing his. She’s getting sort of myopic in her protecting her son.

You’re a mom so you can relate to her pain and her fears. Do find her reaction to be honest?

For sure. He doesn’t outright say, “I don’t want to do this.” I think if he did, if he really was putting his foot down I think she would listen. I do. But I think because he’s in shock and a little bit shut down it’s a little easier for her to miss the signs.

How much preparation did you do for this?

I already knew a lot about date rape, but mostly from the female perspective. I didn’t know enough about the male perspective. I found that it’s very similar. It’s just one has a lot more societal blocks, you know? But they’re still similar. Up to a certain point they’re almost the same in terms of just the treatment of the victims.

When you and I were growing up we had to deal with a lot of similar pressures as high schoolers now, but a big difference is that we never had to deal with social media or texting. What do you think about this double edged sword of communication capabilities now?

When you’re in high school everything’s so big; everything’s so important. Your brain can’t understand context or the future. It’s just right now. Social media is so intense that it’s like a massive gang up. I think it’s driven some kids—specifically I’m thinking of girls—to the edge and made their lives a living hell.

On the other side it’s made things a little bit easier to trace and to prosecute. For instance, the case in Steubenville, Ohio, they just had all this evidence on the phones. I don’t think they would have been able to find the perpetrators if they didn’t have the phones. I don’t know if it would have come to light if it hadn’t been for social media; if the blogger hadn’t brought that all to light. So double edged sword is exactly what it is.

How do you like the anthology series format, where you get to play with the same cast but as different characters each season?

I think it’s great. A lot of theater companies are based on this. Any time you hang out with someone for a long period of time deeper things are going to happen. More connections are going to be made; it’s just richer. There’s the potential for that [here] and I love it.