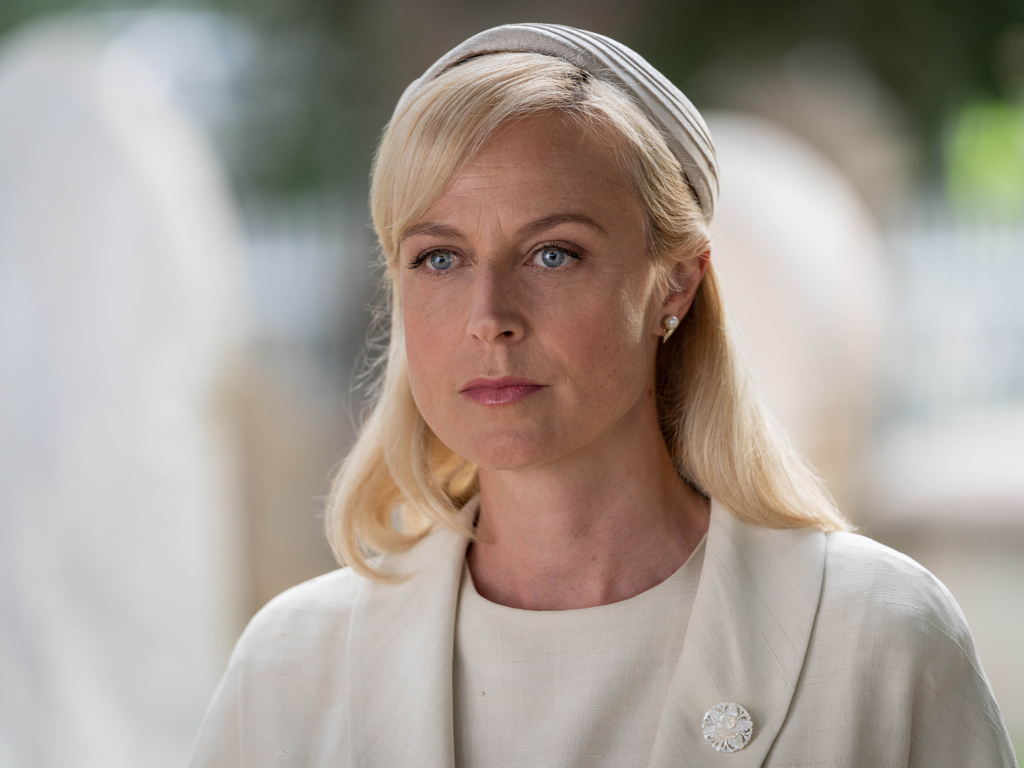 Marta Dusseldorp stars as Sarah in "A Place to Call Home," which is ending after six seasons. (Acorn TV)

Marta Dusseldorp reflects on ‘A Place to Call Home’

Marta Dusseldorp has moved on from her hit Australian series, A Place to Call Home, after six seasons, but she isn’t saying goodbye to her iconic character, Sarah.

“I’ll never be without her. I get to have her for the rest of my life,” Dusseldorp told me during a phone call. “She’s taught me a lot … about dignity and how to actually care for other people, but also how it’s OK to articulate your own pain eventually.”

When the 1950s set series started, Sarah Adams Nordmann Bligh, a Nazi concentration camp survivor, returned to her native Australia after World War II. Working as a nurse in and around the fictional town of Inverness in New South Wales, Sarah faced many prejudices, scandals, betrayals and even attempts on her life. As the series comes to a close, Sarah is happily married to George Bligh (Brett Climo), and is a mom and a nurse.

“Place” may have been a melodrama, but it always had a message as it tackled complex social issues, including racism, xenophohia, anti-Semitism, homophobia and class warfare. The series finale — debuting Oct. 29 on Acorn TV — is exactly as creator Bevan Lee had envisioned it when he and Dusseldorp first discussed the series.

“For a creative experience, it became exactly what it was meant to be. This show is very precious and it’s very true,” she said. “I’m so proud of that.”

Dusseldorp, chatting from Melbourne where she was starring in “A Doll’s House, Part 2,” talked more about playing Sarah and what “A Place to Call Home” has meant to her. We also chatted briefly about her other two popular roles, as the title character in “Janet King” and as journalist Linda Hillier opposite Guy Pearce in “Jack Irish.” Both dramas stream on Acorn TV.

Do you feel like this was a “little show that could” after it was cancelled, revived, and became a hit?

Have they approached you about holiday specials?

Not yet, but … I wouldn’t be surprised if something else [came up].  But I think it’s important with endings that you do think of it like an ending and move on. I certainly did when it was canceled the first time, and I’m looking forward to the new possibilities that are in front of me because I’ve been with “Place” and “Janet King” and “Jack Irish” for seven years now, on and off. So, I think it’s time as well to try other voices and stories. Yeah, it’s a strange but exciting time.

What do you think the show’s accomplished? Because it’s hit so many hot-button issues over the years.

I think it’s really opened up the conversation on a lot of taboos that we still don’t talk about — certainly in Australia and possibly in other countries around the world. This is a show that’s gone to more than 130 territories in the world. There is a need, obviously, for people to examine the different types of things that we look at, which is homophobia, religion, racism, but there are also light parts of the show, as you know.

I also think we are now fascinated with each other’s cultures, and this show is so deeply Australian it gives you a real insight into our countryside and our ways and our language and our voices.

I remember a time when I was only 23 and I came to America, they couldn’t understand what I was saying. They said, “You have to speak in an American accent when you go for your auditions.” I thought, “Oh because they can’t understand you.” That’s all changing now. People are appreciating differences. I think for that it’s been a great exposure to Australia and who we are and were in a historical context.

What are you most proud of?

The thing I’m most proud of is really that the cast stayed together for the six seasons. Nobody left. We were able to keep the integrity of the piece complete — the opera. Bevan Lee wrote the ending that he always wanted to write for the end of Season 6. It was the ending he had told me about in our first read-through in Season 1. “If this show goes six seasons, this is how I’ll end it,” he said.

He had envisioned six seasons from the start? So he was dead on.

That’s how Bevan thinks. He thinks as a page turner, but also how many novels do you stack on the stack? So yeah, he always saw it like that. It’s also part of the reason that it’s finished. Bevan believed it was done.

The cast of “A Place to Call Home” during Season 1 of the Australian series. (Acorn TV)

The cast of “A Place to Call Home” during Season 6. (Acorn TV)

How has Sarah changed over the years from Season 1 to now?

Gosh, so much. When we met her, she was very closed emotionally and very open as a carer [caregiver]. She’s a nurse and she’s been through the Holocaust and survived, so putting both of those things together was interesting.

She was a very practical, non-emotional, kind, loving soul for other people, but she forgot to love herself. She saw that as an unnecessary privilege through the [concentration] camp experience. When you’re a survivor, I think from what I read and watched and investigated, was this feeling of,  “Why me?” And also, “As I have survived, I must bear witness.”

This was a woman who was quite happy to walk through her life very quietly and without causing too much stir, but making sure everyone else around her was OK.

By the end of the six seasons, she had fully embraced life and had embraced love — not just for herself, but also for someone else. She has a child that she would protect with her life, but also was happy to allow him to walk ahead of her. So, there was a bravery that she got and also she was able to finish things with [her first husband,] Rene, and let that go. And letting go, I think, is a really important part of life. It is truly moving forward, truly moving on. So, she did that.

What have you learned from Sarah?

Well, I’m a big lover of other people. I love to be loved as well, and I have a beautiful family. I’ve really been very lucky with that. But I’ve experienced pain in my life and I think it’s good to let it go. Sarah has taught me to let it go and be more in the moment and understand how lucky you are and how much more you can give to other people with that luck.

I am deeply into goodwill work with UNHCR and I find all of that a very important part of who I am. I just keep my eye on things in the world more than I probably used to, but I think that’s also from getting older. You understand that you have a responsibility in the world that isn’t just about you. Nor would you want it to be, actually.

Nora is a suffragette and a person who stands for women’s rights and women’s liberty. She’s also teaching me about my voice and responsibility: In older age, how do we change the world? Can we change ourselves? All these amazing strong women [characters] are teaching me so much. It’s a real privilege.

The last time we talked (“A Place to Call Home” Season 4), you told me the show has that “Gone With the Wind” kind of thing where George and Sarah may never be happy together. You said you didn’t believe they could. Do you think they will now?

This is what I love about George and Sarah and what I love about the show — if you expect the big wedding because they are the central couple of the piece, you won’t be happy. We did it off screen. The perversity of that is so right for this show and I adore it. We did a little domestic ceremony, which is quite awkward and fun and relatable, which is exactly how I wanted it to be. And from there, I have to say, their journey is good.

Brett [Climo], who plays George, and I had so much fun with George and Sarah this season because there was less turmoil within and it was more about dealing with other characters around us. We really became an island that was working and was full of love and adult conversation. Quite often after our scenes, we would look at each other and say, “Wow, wasn’t that great?” Because it was a new dynamic for us to play.

Would you be friends with Sarah, do you think, as Marta?

I don’t know that Sarah has time for friendship, still. She has time for friendship with people like Roy, and I get to work a lot with Roy this season at the beginning, which I absolutely loved returning to that friendship. If she’s your friend, she’s your friend for life, but becoming friends with her would be difficult because she’s so busy trying to look after everyone. That’s a long answer to a simple question, but that’s what I think.

Are you happy with how it all wraps up? Is it a satisfying end for you as an actor?

Very — I will never forget this show. I’m very proud of it. I really hope everyone loves the last season as much as we did making it.

Again, it was written by Bevan Lee and Katherine Thomson, who’s been our script producer for the last few seasons. The two of them bashed it out with such incredible nuance and dedication, and our producers are on board as well as they give their feedback. It’s been the same producers from the very beginning. So, there’s been a real continuity throughout the whole arc of it, which I think is unusual. For that, I have to say, I feel like it’s very intact.

More from Dusseldorp about Jack Irish and Janet King after the photos.

For “Jack Irish,” where is Linda this latest season?

She’s not really in it that much. There was an availability issue with me. But she solved the crime again, of course.

As always. And Jack, he’s annoying as always, because he just asks things of her and gives nothing. You do actually find out what could have been for Jack and Linda. To me, that is a great love story. To me, they should be together and the fact that they can’t or won’t is funny. I absolutely love doing that show. They flew me to India this season. I did a couple of days shooting there. The chaos and whirlwind and experience of that I’ll never forget. I think the flavor that that brings to the Melbourne side of things is really special as well. Fabulous performance by Guy Pearce again, and everyone else who returns season after season because we love it.

Yeah, she’s not there that much, but when she is, it’s quite poignant or it moves the story forward. That’s really your job when you’re in an ensemble and you’re not the lead, is just to trod in and do exactly what you need to do. So, that’s what I try to do with Linda. But she’s a pretty chaotic … She’s a journalist, Curt. You have more similarities to her than I do. She stumbles around and gets into all sorts of strife. All the things we love.

Is there another case coming for “Janet King” coming?

It’s not on the slate at the moment, but I’m ready. I’m waiting, and I’m more than happy to pick her up at any time.

That last season was amazing.