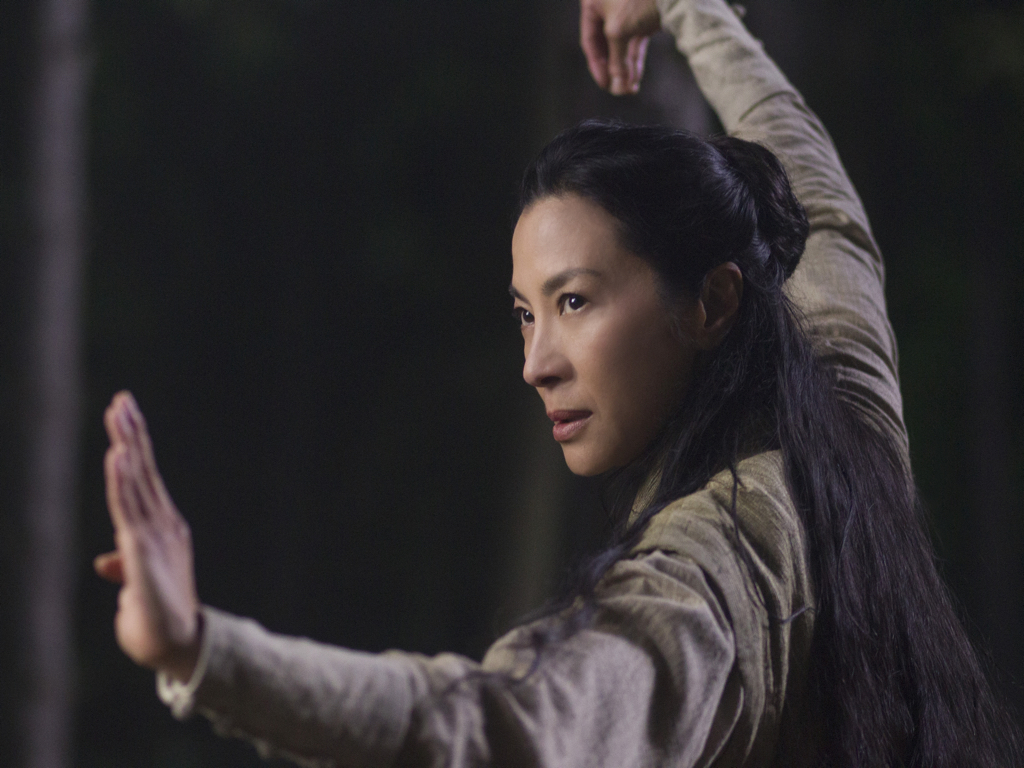 Michelle Yeoh didn’t appear in the first season of Netflix’s Marco Polo, but her character did. Now she’s filling the role creator John Fusco saved for her.

“John was saying to me, ‘I’ve always wanted you to be in my series and I’ve written this role for you,’ ” Yeoh said during a recent phone interview from Paris.

Fusco explained to her that he made sure not to show the face of her future character, called the Handmaiden, in the Season 1 finale in hopes Yeoh would take the role. In the Handmaiden’s only scene, Chinese Chancellor Jia Sidao (Chin Han) commands her to escape with the child emperor as the Mongolian hordes advance on the royal palace.

It’s hard to say no to that kind of “deep persuasion,” the actress said, adding, “I loved what he wanted to do with the character.”

In the new season currently streaming on Netflix, the Handmaiden continues her noble mission to protect the little emperor from Kublai Khan (Benedict Wong). Early in the season she fights Marco Polo (Lorenzo Richelmy) and Mei Lin (Olivia Cheng) with fists, feet and swords.

Those fight scenes have become standard for the Malaysian-born Yeoh, who began her career in Hong Kong action films in the 1990s before Ang Lee’s “Crouching Tiger, Hidden Dragon” made her an international superstar in 2000.

Although she hadn’t starred in a martial arts film since 2010, Yeoh was eager to get back into action movies. Earlier this year, the 53-year-old reprised the role of Yu Shu Lien in “Crouching Tiger, Hidden Dragon: Sword of Destiny.”

She once again did her own stunts for both Netflix projects, from highly choreographed sword duels to the fabulous wire work that has her flying through the air.

“Oh, I was so happy to come back to it,” she said, adding that she works hard to stay in great shape. “One day when I feel I can’t lift my leg to touch the tip of my nose then maybe that’s the time to sit down. But until then I’m just going to have a good time.”

Yeoh and I discussed her career, including her guest role last year in “Strike Back.” We also talked about the Handmaiden’s mission, her deep connection to Hundred Eyes (Tom Wu) and empathy for Mei Lin. There are some light “Marco Polo” spoilers, so maybe read this after viewing the fourth episode of the new season.

I was surprised to read in your bio that you’re not a trained martial artist.

Michelle Yeoh: I’m a good actress who managed to mimic them really, really well. [Laughs.] That’s the truth. I did not start off my career as a martial artist but as a ballerina. I did ballet and contemporary ballet. It’s one kind of movement that goes into another kind of movement—and looking kind of cool on the big screen. … I never trained for years on end like Jet Li or Jackie [Chan]. I really just transformed my dance skills into more active action looks.

Preparing for your famous fight roles, did you do any training of actual martial arts?

Yes, since I had to do martial arts films and it’s a very specific technique. You have to use certain kinds of weapons that have a certain style that cannot be faked. You just don’t pick up swords and knives and pretend that you can do it. Because of that I have been in training. I’ve learned all different ways [of fighting]. I am like the jack of all trades, master of none.  I pretend—unlike Jet Li or Jackie, who have been training since they were four or five.

You make it look absolutely real.

It’s a certain kind of movement along with the dance training. At the end of the day we have two arms and two legs. It’s knowing how to follow movements that make it look like what it is supposed to be. So that’s why I have my own little style which is a little different from Jackie’s or Jet’s and the usual suspects.

Earlier this year you starred in “Sword of Destiny” and now you’re kicking some butt in “Marco Polo.” What persuaded you to get back into martial arts films?

I’ve been given opportunities to explore different characters. I have been not stereotyped into just doing action films. I must say I’m very, very blessed, because otherwise I would be doing only action movies. It’s been a couple of years since I’ve had the chance to go back into doing action with “Destiny” and then immediately “Marco Polo.” In between I was doing “Sunshine” and “Memoirs of a Geisha,” so as an actor it’s been fulfilling.

But I love the martial arts. I really do. It was so much fun getting back into it, especially with “Marco Polo 2.” Because that was more action. In “Sword of Destiny” there was action, but it was a movie. That’s one-and-a-half hours versus when you’re doing a TV series, which is 10 episodes. The stretch of the action sequences are much longer, which gives you this amazing period where you are training and you’re hanging out with your stuntmen and with Brett Chan and his whole group, Little Jet. It was joy.

That was how I started in my first action movie. So for the last year it was a lot of fun when I was working on “Marco Polo 2.”

Now I’ve been bitten by the bug very bad.

Are you ready for more TV?

I am so totally ready. It’s a different kind of lifestyle and it’s really nice because you work on something and it’s like a big family. If you’re lucky you’re working on it not just for a few months; … it could be a few years or three years or four years, which is nice. When you work on a movie chances are you work with that group once or twice if you’re lucky, but never years consecutively. I like that family camaraderie that you have on a TV series.

You often play strong but sort of elegant roles. I was wondering what kind of characters you like to play and what roles do you try to avoid?

I think it’s very easy. The very stereotypical types of roles about what it is to be Chinese I really try to avoid. If you have to make an excuse for a Chinese character to be in a movie it’s a really no-go for me.

I love flawed characters. I think all actors do because then it really challenges you to be who you are not. You want to be exploring. You want to be able to learn or challenge yourself on every single different level—emotionally, intellectually, etc. And that is the thing that actors always feel a little insecure about, but you thrive on that. Acting is a passion or a career that keeps you on your toes. You’re always continuously learning.

In “Strike Back” you played the duplicitous spy Li-Na. I thought you were great.

Thank you. That was my first evil role. I kept saying to my director, “I’m not evil.” She has intention, I believe. She’s very passionate about what she is.

That role and even this role as the Handmaiden, people could say you’re the bad guy because you’re working against the “hero” of the story.

For anybody who supports them, they’re the good guys. At the end of the day, if you want to risk your life you have to believe in what you’re doing. It translates into the character that you’re playing. I think unfortunately it reflects in real life as well.

Tell me about the Handmaiden. How did you come to the character and how do you approach her?

I would have loved to have been in Season 1 as well, because I really thought the world needed to see a series about China. You have so many TV series out there. I think this is probably the first serious one about ancient China, the culture and history. And about Kublai Khan, who managed to break through the walls facing Mongolia and set up the Yuan dynasty.

And we see it through a foreigner’s eyes. … Telling history from our own [Chinese] point of view sometimes can be a little bit difficult for others to understand, because you did not grow up in this culture. But here we have an Italian who comes into this whole new world and is able to express to his people—his part of the world—what he was encountering and why these people were doing what they were doing. For me that was completely fascinating. …

She was the one who was going to protect the future of China, the little emperor. That was the biggest mission, which she obviously failed. But with a character like that you don’t fail. And if you have, you need to redeem yourself. That’s what she is trying to do. In the process she discovers [Marco Polo], who is this foreigner who’s able to use martial arts moves that were only privy to our clan. So she had to find out more.

It started her on this big journey where it was not just about the little emperor who was murdered, but who was this mysterious character who would have taught Marco Polo moves that were a secret.

What is her connection to Hundred Eyes?

Oh, the connection is very, very deep. On her journey to redeem herself, she discovers the love of her life, whom she thought was dead. I thought that tragic. That big, controversial fight to draw him back into what she believed was the right thing for him and for her—for the both of them. That was a very tragic swan dance for them. I think the more you realize and you see these two great warriors battling it out and then you realize why they are battling it out it’s very powerful.

Your character and Mei Lin have an awesome fight, but then it looks like the Handmaiden and Mei Lin might work together. Is that possible?

She has the biggest connection with Mei Lin because obviously she’s Chinese. She’s Han and she is in the Mongolian court. [The Handmaiden] believes that this girl is not there out of choice. She has her own issues as well, so there is a connection. … She feels she can use Mei Lin to find out more about what is going on within the court.

Mei Lin is in a tough situation, having to do things she’d rather not for Kublai Khan. Does the Handmaiden sympathize?

Mei Lin is a very, very tragic character. The poor thing; everybody has her as their hostage. Everyone. Because of [her concern for] the well-being of her daughter, she’s at the mercy of Chabi, of Khan, of Ahmad. She has no choice but to be torn in all these different directions.

I think for Mei Lin it was almost like a life buoy that the Handmaiden has come. Maybe she is able to help her run away, help her to face her fears and do what she needs to do with the comfort of knowing that her daughter is going to be OK. Right now she’s just lost, the poor thing. She has no choice.

At this point in your career, what do you look for in a project? Are you going to be fighting until you can’t kick your leg up in the air anymore?

[Laughs.] I think you just hit it on the button. I always said I would just do it until I don’t find the joy in doing it anymore. That’s where I’m very, very lucky. I’m so thoroughly enjoying it—whether it’s the physical, the mental, all the challenges, the travels and the excitement of being with such smart, creative people.