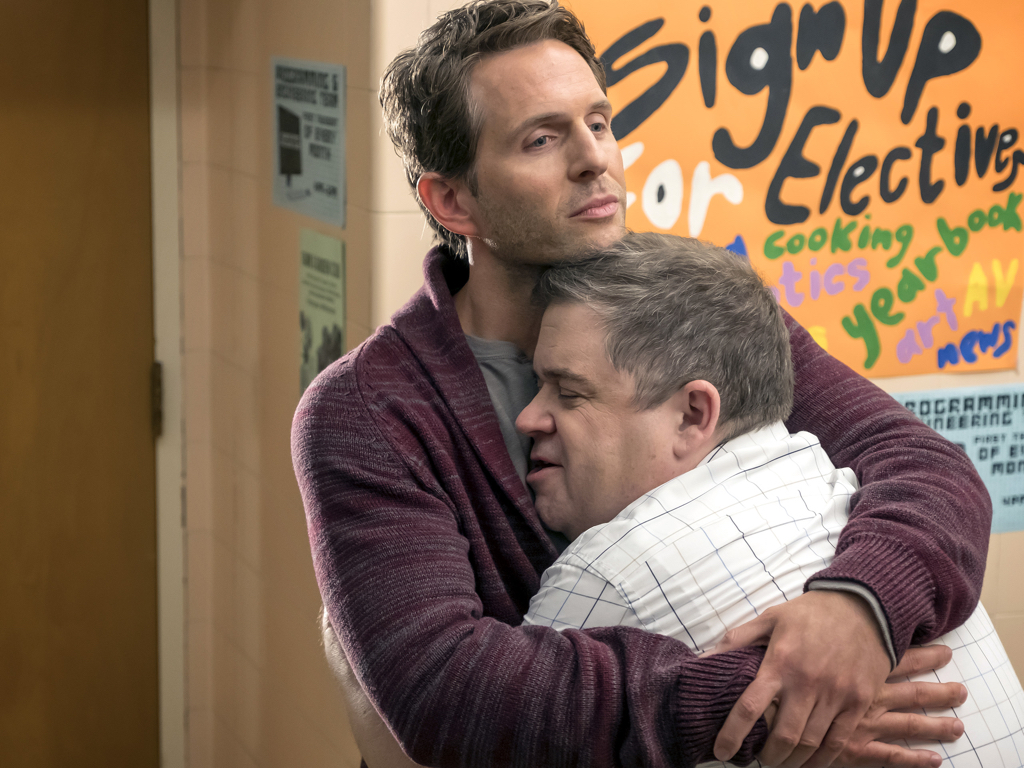 Fans won’t see another episode of A.P. Bio on NBC until after the Winter Olympics, but class will be in session Feb. 7 when creator Mike O’Brien and his stars take part in a watch-along event on CollegeHumor’s Facebook page and YouTube Channel.

If you didn’t see the preview episode on NBC recently, O’Brien promises a good time.

“It’s hopefully got a little bit more heart than some sitcoms, but our priority is always funniness first,” the former Chicago improv actor and writer said. “Hopefully each episode, they’ll be laughing first and foremost—guaranteed minimal seven chuckles and one thoughtful moment. Promise.”

“And they get their money back if not,” he went on. “I don’t know if they’re buying—do they put money in the TV? I don’t know how this works.”

Good thing O’Brien isn’t organizing the watch-along, I guess. During a conversation moderated by CollegeHumor’s Rekha Shankar, he, Glenn Howerton, Patton Oswalt and others will answer fan-submitted questions live and share behind-the-scenes stories.

All this after the comedy’s pilot episode streams live beginning at 10/9c Feb. 7.

If you have yet to watch, the sitcom follows fired—and overly egotistical—Harvard philosophy scholar Jack Griffin (Howerton) as he tries to rehabilitate his career by teaching Advanced Placement biology at Whitlock High School in Toledo, Ohio.

Much to the dismay of Principal Durbin (Oswalt) and the bemusement of three other teachers (Mary Sohn, Lyric Lewis, Jean Villepique), Jack shirks teaching his honor roll students. Instead, he enlists them to get revenge on his nemesis, another professor who got a Stanford teaching position he wanted.

“He’s very petty and obsessive about someone else who’s doing well instead of putting his head down and doing his own work,” O’Brien told me, adding that he, too, has had those feelings.

Read more from my interview below, and click the link to read my Mike O’Brien story at the Chicago Sun-Times. We chatted about his time in Chicago and about “A.P. Bio.”

The cast of “A.P. Bio” (NBCUniversal)

Despite Jack being angry and not all that nice at first, he is kind of warn and fuzzy around the edges, isn’t it?

You know how the Grinch’s heart grows 10 times or something? Jack’s heart grows like 1 percent every episode. He’s slowly warming up to Toledo and those specific kids and kinda growing to like it. So it’s a small change at a time, but he does keep being reminded that these are good people.

Did you have people in mind when you were thinking about these characters and writing them?

I didn’t really. There was a point where the character of Mary did start to feel more and more like Mary Sohn, but otherwise I often just kind of think about them as more isolated characters. I separate that from the casting step. If that makes sense, as supposed to some people who write for someone.

Some of the male characters are all different versions of myself. So I’m like, “Now we need to cast an 80-year-old man.” But it’s really kind of a version of me when I’m feeling grumpy or something like that. It’s an easier way to write for me than picturing the actor from the beginning.

Are you like Jack early in the morning before you get coffee?

Funny. In the area that I do overlap with him is when I’m jealous of friends who are having a better year than me professionally. … I think, maybe everyone has flashes of that. I certainly have at different times in my past sat and thought about why did so-and-so get this thing that I wanted, instead of just putting my head down and doing work so I get something else similar.

How did you come up with this idea that he would be busted down to a high school as opposed to a community college or working in a grocery store?

It’s a good question, because any of those would work. The inherent thing about the high school setting is I knew he was going to be pretty angry and pretty bitter and just kind of have a lot of walls up. Kids can be a really nice contrast for that—otherwise it can get a little bit tiring to see someone just be crabby.

So I thought as opposed to bagging groceries, which would have had its own cool advantages, the thing here was that he is saying these things to sweet-faced kids. Nerdy high school kids are just the most endearing thing in the world to me. So if they’re really sweet and honest, and optimistic and love learning, then it’d be a really nice contrast and maybe kind of make it much more enjoyable when he is a jerk instead of if he’s just a jerk to other cranky adults. The effect would be different.

You come from an improv background in Chicago and writing for “Saturday Night Live.” Are you a writer who gets mad when the actors go off script or do you encourage that?

First off, I don’t get mad a lot, because I am just so excited about the project. We did work so hard on the scripts and we would rewrite and rewrite every single line so many times that I really believed in the scripts by the time we got to the shooting day.

I could acknowledge that we had some of the funniest people I’ve ever worked with on the set, so I would usually ask that the director did it as scripted several times, and then always try to leave space for people to have a couple where they do if we had time.

They did knock out our meticulously crafted, scripted joke a handful of times for sure with just an off-the-cuff thing. They’re extremely funny, so I tried to always leave space for that while respecting the writing.

Where, when to watch A.P. Bio