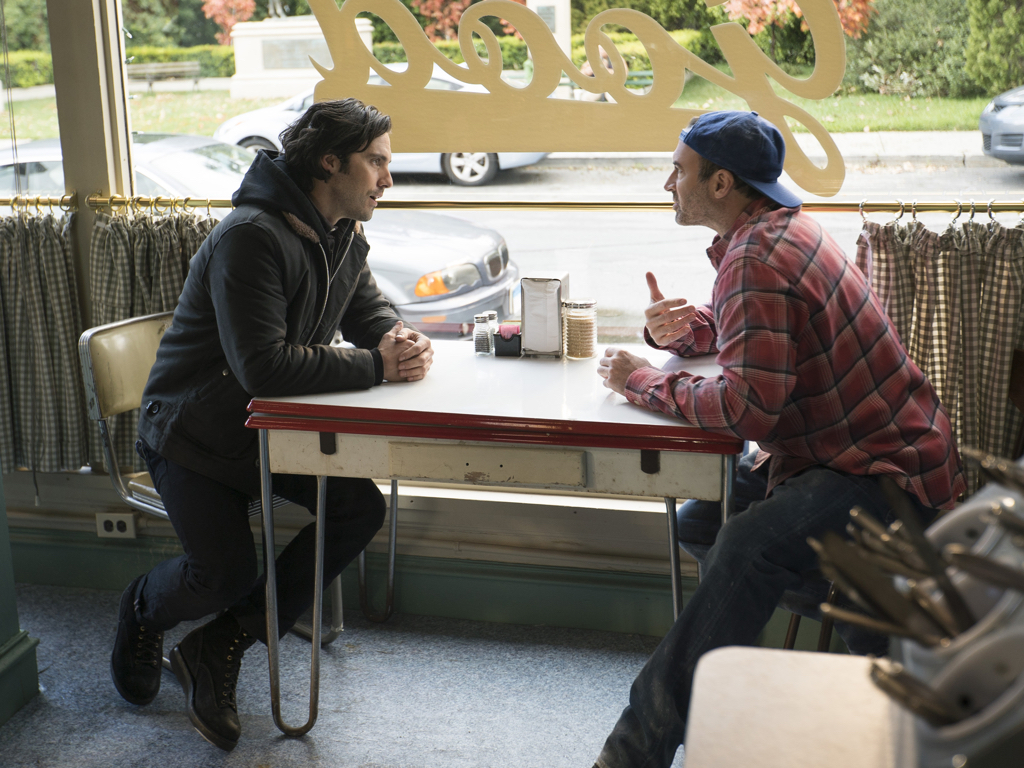 Jess (Milo Ventimiglia) and his Uncle Luke (Scott Patterson), get reacquainted in "Gilmore Girls: A Year in the Life." (Netflix)

Gilmore Girls fans can’t wait to find out which ex, if any, Rory picks in the Netflix revival. Milo Ventimiglia, who plays one of those men, hopes viewers put aside their fantasies before watching Nov. 25.

“I know that your minds … have wandered about what happened to these characters,” he said. “Pull it back to the very last moments you saw of any of these characters. That’s the only place you can start from.”

That’s exactly what Ventimiglia did for “Gilmore Girls: A Year in the Life.” Ten years after leaving the original series, he went into filming with “zero expectations” about his character, Jess Mariano.

Ventimiglia joined the original show when he was 24, playing Jess for six years. Before filming the new episodes, he watched the final three scenes featuring Jess to remember the character’s situation at the time.

Rory’s (Alexis Bledel) mother, Lorelai (Lauren Graham), didn’t approve of her relationship with Jess back in the day. The troubled teen moved in with his uncle, Luke Danes (Scott Patterson), after his frustrated mother sent him away due to bad behavior.

Jess wasn’t an easy person to date. His lack of communication and lies made for a rocky relationship with Rory. Although Ventimiglia wouldn’t confirm nor deny a possible rekindled romance between the two, he did say the resident bad boy of Stars Hollow has changed since last we saw him.

“I think he’s grown up,” he said. “He’s gotten to a point where he doesn’t need to taunt or torment people for … his own benefit or his own entertainment. He turned into a very decent guy.”

Jess isn’t the only one of Rory’s old boyfriends appearing in at least one of the four feature-length episodes. “Supernatural” star Jared Padalecki reprises his role of Dean Forester, Rory’s first boyfriend whom she dated on-and-off for many years. Matt Czuchry returns as Logan Huntzberger, Rory’s post-Jess steady.

Whichever one of Rory’s exes you favor, Ventimiglia hopes fans will enjoy the new episodes as much as he enjoyed returning to the role of Jess. When original series creators Amy Sherman-Palladino and Daniel Palladino approached him, he jumped at the opportunity.

“I said ‘Absolutely, I will be there,’” he said. “I was looking forward to hanging out with some friends and shooting some more ‘Gilmore.’”

Netflix launches the much anticipated “Gilmore Girls: A Year in the Life” on Nov. 25. The Palladinos executive produce, write and direct the four 90-minute chapters that focus on the four seasons.

More Milo: We all have butts, This Is Us star says