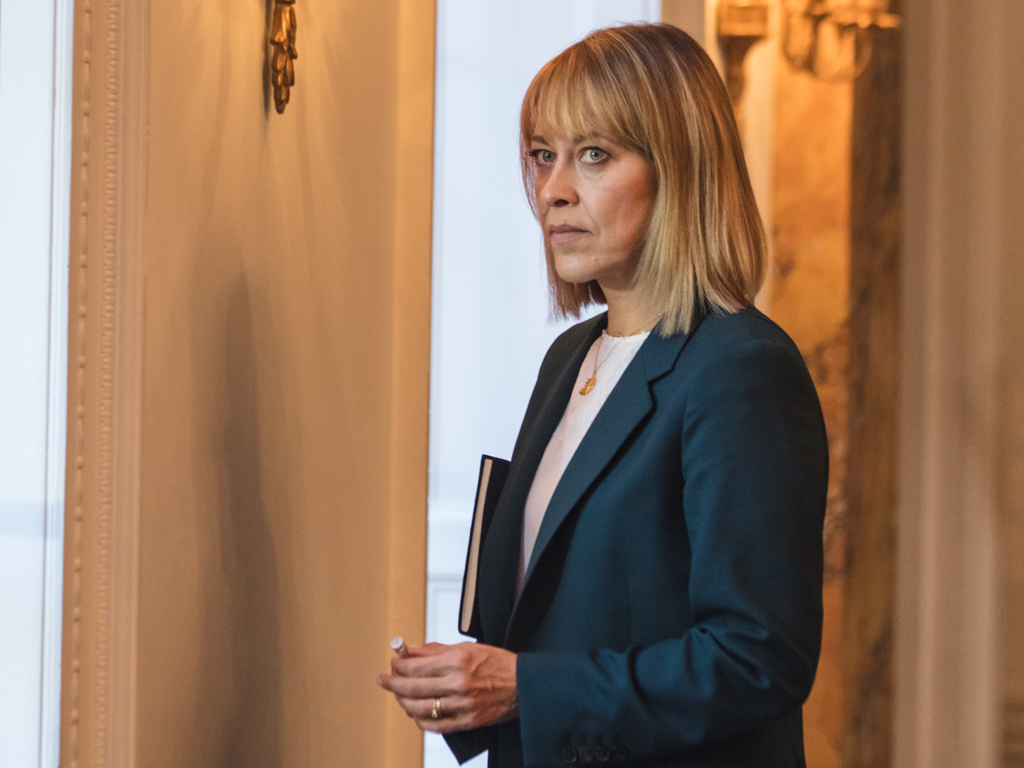 If you’ve watched a British-made TV series recently (or ever), you’re most likely familiar with Nicola Walker. She played a detective in Unforgotten on PBS and a vicar in Collateral, now streaming on Netflix. She’s currently leading a marvelous cast in The Split on SundanceTV.

Walker plays Hannah Stern, a high-powered divorce lawyer and the eldest daughter of a family of lawyers. She recently left the family firm created by her mother Ruth (Deborah Findlay), for a larger London firm. Her former flame, Christie (Barry Atsma), also happens to work there.

Christie is just another complication in Hannah’s life. She’s mom to three kids, but also seems to be taking care of husband Nathan (Stephen Mangan) and her sisters, Nina (Annabel Scholey) and Rose (Fiona Button).

She’s holding it all together—barely—when her father, Oscar (Anthony Head), shows up outside her new offices one day 30 years after abandoning the family.

I spoke with Walker, whose credits also include “River,” “Last Tango in Halifax,” “MI-5” and many others, just as she was filming the next season of “Unforgettable.”

We talked about Hannah’s really bad day,  how wonderful it is to work on a project about women created by women, and what Walker almost told Kenneth Branagh.

New episodes of the six-part “The Split” air at 9 p.m. Wednesdays on SundanceTV. If you miss an episode, watch at sundancetv.com.

Before we start, one of my favorite of your roles is Susan Taylor in “Touching Evil.”

No way Curt! I’m so pleased you say that. I loved that series. It was produced by Jane Featherstone, who is the executive producer and the founder of Sister Pictures, that made this. So that was the first time I worked with Jane, back on “Touching Evil.”

I thought that was the first thing I ever saw you in, until I was researching for our interview. It turns out I saw you singing “Can’t Smile Without You” in “Four Weddings and a Funeral.”

You did, you did. To notice that, I’m surprised. Normally it’s only my blood relatives who know about that. You have to be related to me to make that connection.

It makes me want to go back and watch that again.

I love going back and seeing what people who I recognize now have done in the past.

That was literally my first job. My secret joy about that job is my character’s wearing a love heart necklace that I stole at the end of my few days on it.

When I was being that character, for my own amusement, I put inside the locket on one side a picture of Emma Thompson. The other side I put a picture of Kenneth Branagh. It really tickled me at the time, to have, as far as I was concerned and quite rightly, the king and queen of British theater in my love heart.

At some point, they needed to have Hannah the lawyer in their lives.

[Laughs.] I worked with Kenneth Branagh years later. I was going to tell him he was in my locket but I chickened out.

Probably wise. Let’s talk about “The Split.” Why this role for you?

Well, when the audition came in I was sent two scripts, which is unusual. They don’t often give that much away. I read the first two episodes, and that was why really. It’s the first time I’d read a script where up front and center were these four brilliantly written women.

Yes, it’s set in a divorce world, but what [creator] Abi Morgan is doing is looking at all modern relationships through the business of divorce. What became very clear to me quickly is what she’s actually writing about is marriage and love and family. That immediately made me very much want to do it.

The three sisters and their mother really represent the various stages in life, right?

They certainly do, yeah.

The one sister who’s rejected it all. A mother who actually was left young, but never remarried. [She] concentrated on bringing up those three girls on her own and building this business to pass on to them, which she then refuses to pass on now.

Do you normally have to audition these days?

I like auditioning. I think I’m one of the few actors who really likes auditioning. Yeah, I still have to sit sweating in a room, acting with a casting director down the lens of the camera. Yes, I’m still doing that.

I have had jobs that have just been offered. But then no one’s had that sweaty nervous time in an audition to learn what they think of you and what you’re doing with it, and what you think of them and what they’re trying to make. I always think with the ones you’ve been offered, at some point they’re going to tap me on the shoulder and say, “Actually, you’re not doing this. It wasn’t how we thought you would do it, so if you could just move along.”

At least when you audition, everyone has a fighting chance of knowing where you’re all going, so I quite like it.

You’ve worked with Abi on “River,” and sometimes I think when you work with people again, that maybe that was a little boost that helped or that she thought of you when she wrote, or anything like that, but apparently not.

When I went in for the audition, Abi was there. I had such a fantastic time on “River.” All I wanted to do was work with Abi Morgan again. I think she’s an astonishing writer. It became clear very quickly that having Abi in the room was making me incredibly nervous.

Yeah. Maybe the more sane response would be to think, “I’ve worked with this person before. It’s a huge compliment that they have me back in for their next show.”

In my head I was just thinking, “I could completely let her down here. This moment, this is where I could blow it.” Because I respect and love her so much.

Was it important to you, the idea that the show is mainly about women. They’re at the forefront, and also it’s led by women?

It’s always important to me that the stories give women time, give the characters time, and are interested in their characters fully. That’s always the most interesting thing about scripts, and they’re the best scripts, where it’s true for the female characters, as much as it is for the male characters. I think that is what Abi does.

It was unusual for me to read a script that was clearly putting four women at the front, in an environment that I didn’t realize is heavily, heavily dominated by women. Abi has found a world where women do dominate, divorce law. I didn’t realize that.

I knew that London is cited as the divorce capital of the world, for people to come and have their divorces. I had no idea that it was a heavily dominated female area of law. That was new to me. It made sense why Abi thought about that world and thought this would be a great environment in which to talk about relationships of all kinds.

I think it’s unusual, too, to see sort of a woman’s midlife crisis.

It’s interesting. I hadn’t ever thought of it like that. Someone said that to me the other day. She doesn’t know she’s in crisis. The top of the water is up under her nose. Anything more going into the water just brings it up over her head. She doesn’t know that until it starts happening.

She thinks she’s at a point in her life where she’s finally finding an identity outside of her family, and is, I think, quite hopeful about it. Then her father appears outside her new office. Suddenly everything starts to change. I think it’s only then she realizes, it makes her reflect on all her relationships—with her mother, with her father, with her sisters, with her husband. It makes her rethink the stories that she’s told about her family life since he left.

That first episode, she really gets everything thrown at her right and left.

She’s left the family practice with her mother and her sisters. She gets her new hair and everybody’s commenting on that.

Yeah, which is awful for her!

Chat with the old boyfriend and then dad shows up.

You find out quite quickly in the series, she knew Kristy was going to be there. That’s not a surprise, but is a complication. I think that in Hannah’s mind, the most important thing is that she moves away from that family firm. Everything else that happens that day is on the back of the father walking back into her life out of nowhere, after 30 years.

That’s really the thing that knocks her for a loop.

I think so. It’s pretty much chucking a grenade into that family in that moment.

It seems so real, her reaction as the oldest child, and the one who maybe feels most betrayed.

If there is a crisis, I think it’s less midlife and more about, with the father reappearing, it makes her have to go back and live through that time again. They had found a way to survive and function in a very high manner in his absence. They killed him off.

She keeps sort of stamping out that little flicker of a flame with Christie but he keeps trying.

It gets so complicated. It gets really complicated, about where that flame is flickering from, it gets very complicated as the series goes on.

I don’t want to plot spoil it. It’s far more complicated than it first appears. In the first episode, it’s this beautiful man that she knew when they were at law school. There’s quite a lot more going on.

You are married. Say that you had planned on getting married later this year, would having done “The Split” have changed your mind?

No, not at all. I think marriage is still the most blindly optimistic leap of faith that any couple can make. I think if you get to the place where you feel you want to make that commitment, I don’t think anything could put you off.

Whether or not you survive, is a different thing. [Laughs.]

By the way, why do we keep doing it? We do keep doing it, even though modern love tells us that it’s a very old fashioned contract. We all live, first of all, longer than we used to. Women have many more opportunities in their lives than days gone past. There are a lot of complicating factors, and yet we still make that commitment.

I think that I find that incredibly interesting. It cheers me that people still are hopeful in that way.

Why acting for you?

I didn’t ever really want to do anything else. I liked pretending to be other people. When I was 13, when my friends were starting whatever they were into, I found out by my local youth theater and I went there. There was this very mixed group of kids from the area, all from different backgrounds, and they all liked acting as well.

I liked making something in a group, created something together. That’s still the bit that I enjoy the most. You’re in a group. Together you build a story together. Nothing much has changed really.

We’re currently enjoying you in “Unforgotten” now, too. Will we see more of that?

Yes. I was filming today, I’m filming tomorrow. I could tell you the most appalling spoilers of what I’ve been doing today. I literally want to. Some part of me wants to go, “Yes, and today I’ve been …”

Nicola Walker in The Split