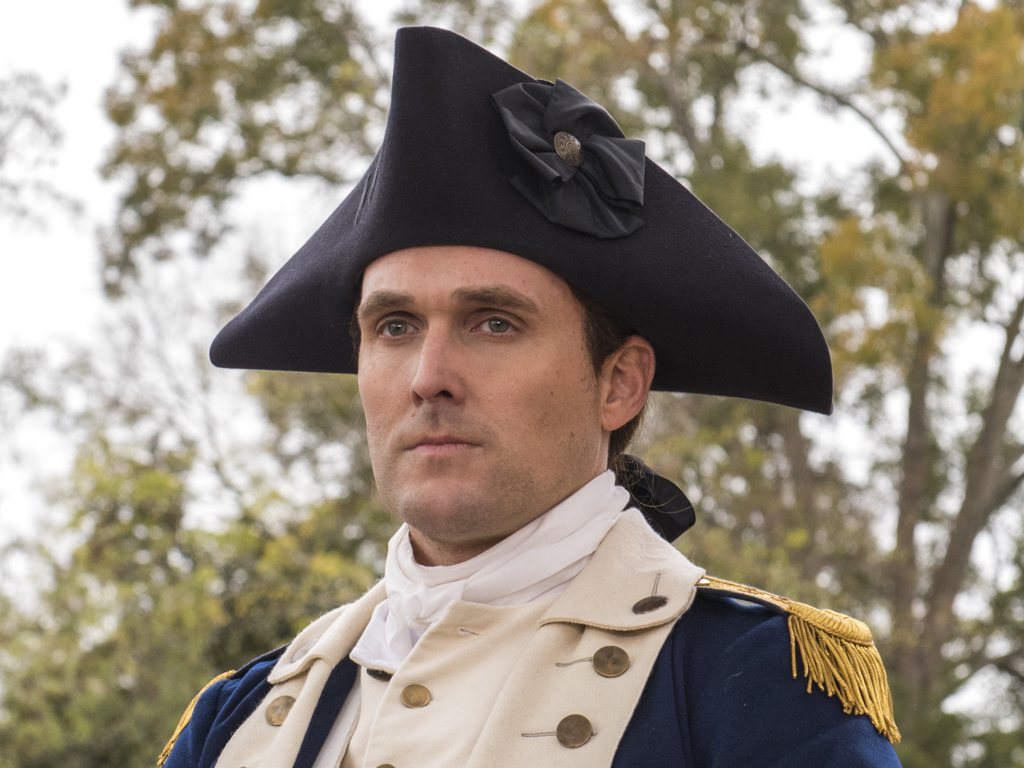 Owain Yeoman hopes viewers of Turn: Washington’s Spies will recognize Benedict Arnold as a hero as well as a traitor who defected to the British Army during the Revolutionary War.

Yeoman wanted to portray Arnold as human being and not just a history lesson.

“I love to be able to challenge all those things that people think that they know about Arnold,” the Welsh actor said. “If you could enjoy a character at his best and in his highest moment of glory, then I think we can kind of empathize with and understand him at his lowest point.”

“Turn,” creator Craig Silverstein’s engrossing look at America’s original spy ring, returns at 10/9c April 25 on AMC. In its third season, the series delves deeper into the American Revolution and the players involved, including Arnold.

As Yeoman plays him, Arnold is a superlative soldier whose huge ego is matched only by the chip on his shoulder. Arnold believes that despite his heroics in battle, both the Continental Congress and Army didn’t properly recognize him and often overlooked him for promotion.

Last season Arnold played a key role in American victories at the Battles of Saratoga in 1777, but suffered leg injuries that ended his combat career for a time and further embittered him.

As the new season begins, Arnold has been put in command of Philadelphia. He butts heads with Congress again, accusing the institution of not reimbursing him for war expenses he himself paid.

Arnold’s pride, arrogance and disappointments all are factors that lead to his eventual undoing, Yeoman said, as is his love for the manipulative Peggy Shippen (Ksenia Solo). (Read more about her in the Q&A from last season excerpted below.)

Yeoman, who starred for seven seasons in “The Mentalist,” believes that had things gone a little differently 300-some years ago, history might honor Arnold instead of vilify him.

“Hopefully if the show does anything for the posthumous reputation of Benedict Arnold, it will make us realize that had he died after Saratoga he probably would have been celebrated as a great American hero,” Yeoman said.

Were you at all apprehensive about taking on the role of a real-life historical character?

There’s always the slight apprehension when you take on the responsibility to sort of honor that reputation. I don’t know if it’s a reputation that many people really want to uphold. [Laughs.] When you tell people that you’re playing America’s biggest traitor—I’m not sure that you’re trying to do him right or do him wrong really.

But yeah, it comes with a lot of baggage. Fortunately for me as a Brit, I was able to come to the research for this role sort of unburdened by all of the preconceptions about who Benedict Arnold was. We didn’t have a lot of American Revolution and Civil War history in the UK.

I had a long discussion with both Barry Josephson and Craig [Silverstein] just to make sure that we were all on the same page about who we wanted this guy to be. So much is known in history about the traitor Benedict Arnold, but it’s not that easy to find … the real human being. We were all really, really concerned with trying to present him both as a man and as the traitor we learned about in history.

After [the Battle of] Saratoga he was recognized as one of the greatest assets on the American side, so [it was important] understanding him in the status of a hero, which he really was before his betrayal.

I was going to ask if you were apprehensive about playing one of the most notorious Americans in history, but I guess you’ve kind of answered that already.

Yes, it is a funny one though. I have noticed when I speak to American friends, they’re the ones who have that kind of shock and take a breath and say, “Oh, you’re playing that guy. I’m sorry.”

I kind of love that. I think there’s a challenge in that. There’s a real opportunity to understand this guy in a different light … He’s had a series of personal disappointments. Not to mention the catalyst of a beautiful woman in the form of Peggy Shippen, who becomes this kind of Lady Macbeth type of figure. She said, “Listen, you’re not getting that kind of love and appreciation on the American side. Here’s the British side.” Shippen obviously becomes very, very influential in [British Major] John Andre’s (JJ Field) plan to turn Benedict Arnold. So by the time he finally comes around to the idea, there’s an awful lot that has led him to become a traitor.

We know more about Benedict Arnold than Jamie Bell’s character, Abraham Woodhull. But did you still find plenty of space to interpret Benedict in your own way?

I think so. The show really rides a very, very neat balance between what is historical fact while keeping a level of dramatic interest. It’s always hard when we’ve effectively got spoilers that are almost 300 years old. We know what’s going to happen in history, so it’s a challenge to keep interest alive. The show tries to keep the history there as a framework that we can all tip our hats to, but as we get down into the personal nitty gritty of these characters we’re allowed to get a bit lighter.

I started working with a dialect coach called Catherine Charlton because the first place for me was what does this guy sound like. No one really knows what the colonial settlers sounded like. We arrived at a kind of west country settler’s accent. I think those little liberties are things that you can take artistically … to make this guy into a real-life character.

We learned right away [in Season 2] that Benedict is disappointed about his situation, as you mentioned. He is open with his bitterness, which was surprising. Not a company man at all.

No, no. Absolutely. When you’ve been kind of screwed by the company on numerous occasions, then it becomes harder and harder to subscribe to [the company plan]. In researching the role I found out that Benedict Arnold was actually paying for a lot of his own supplies … and Congress promoted others over him. I think after a while that’s going to kind of grind on you and become the straw that ultimately breaks the camel’s back.

Has playing Benedict Arnold changed your mind about him?

Oh, for sure. … I’ve definitely discovered the hero in him. I really think that when it comes to a character you can’t come with a judgmental frame of mind and say, “I’m playing this guy now and history remembers him as this and therefore everything has to be played with a mind toward that final betrayal.”

Instead of just saying he’s a traitor and he did this, I think it’s far more interesting to understand the motivations behind the man and then what forced him into that situation.

It was a challenge for me personally because I wanted after “The Mentalist” to do something just completely different. So on a personal and creative level, it was the opportunity to show people that there’s a completely different side of me. I love being able to immerse myself in the period stuff and all of that.

You mentioned “The Mentalist,” where you played FBI Agent Wayne Rigsby. You couldn’t get much different than those two guys, could you?

No. You never imagine when you start a show that it will end up airing for seven years. It was such a joy to be part of something that found an audience. But I don’t really think Rigsby is especially close to who I am, not to say that Benedict Arnold is any closer. But I think there’s something really, really exciting for me about playing a very front foot-forward character Like Arnold.

Rigsby was sort of passive and he let things come to him and everything was all right by him and he was a kind of the ultimate team player. Whereas Benedict Arnold was so much more interesting to play because he really marches to the beat of his own drum. I found him a fascinating man to play.  He in many respects is not just at war with Congress but terribly at war with himself. I think that ultimately is a major factor in his undoing.

Your mother is a history teacher. Has she given you historical notes for this project?

It’s funny, my mom was my history teacher for almost six years and I lucked out on this one because her specialty was European history and not American history. So I was off the hook on this one, but I threw myself voraciously into research for it not just because I wanted to do the character but because I really think it’s a fascinating period in history.

People who are nervous or apprehensive about kind of watching an historical show, I think they’ll be really surprised. I was really surprised at just how much it felt like James Bond transported into the 1770s instead of the 1980s. Those people over who aren’t so sure about historical fare as entertainment, I think, will be totally surprised by the dynamics and the acting and the production value and the interaction of these characters and just how accessible in modern day they really feel.