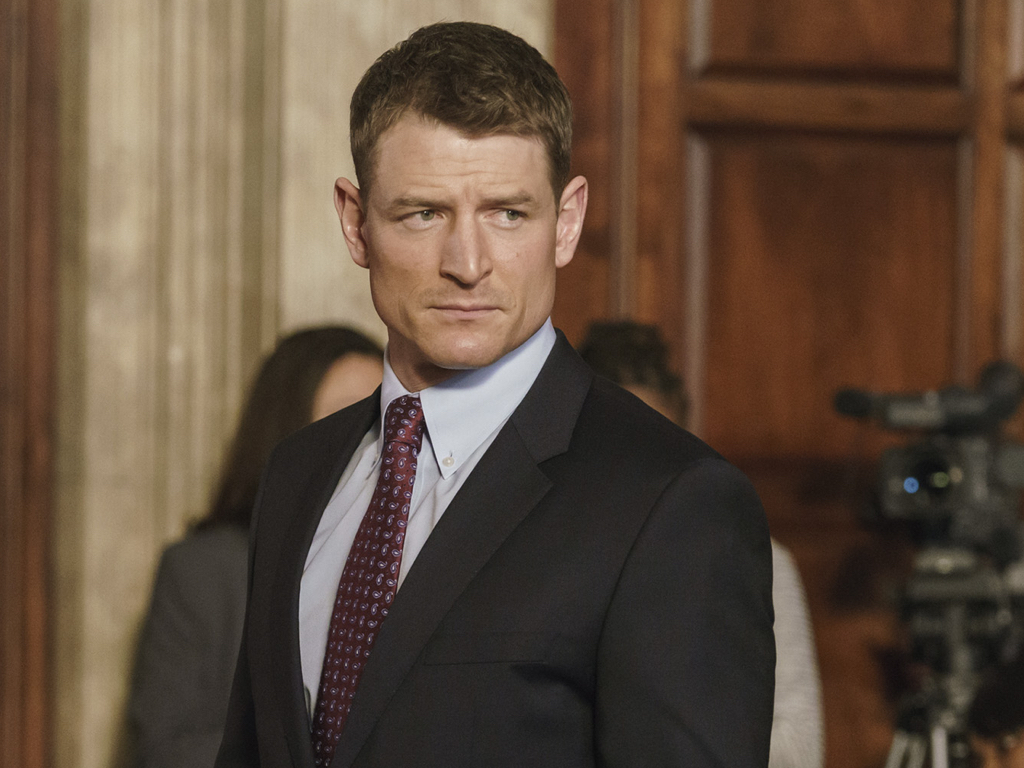 Playing Assistant State’s Attorney Peter Stone, he had to learn more dialogue than in past roles in “Strike Back,” “The Player” and one of my personal favorites, “Crusoe.”

“By Episode 4 I realized what was coming down the pipe,” the Montana native told me recently. “It just felt like a wave, always ready to crash over the top of me.”

He appreciates getting to build that memory muscle, and also the “ripped-from-the-headlines” story telling of “Chicago Justice,” which comes from “Law and Order” creator Dick Wolf.

“See Something,” a special Tuesday episode airing at 10/9c March 7, Stone takes on a case involving the murder of a Muslim university student. Northeastern Illinois University served as the university setting for the episode, which hits on current national issues involving immigration and racism.

Cast, crew and extras discussed the issues brought up throughout filming, Winchester said. That’s when he realized the importance of the words he was speaking.

“This story matters,” he said, and added about the entire season. “We’re really bringing up issues that people need to talk about. The words have power.”

Winchester talked more about the upcoming episode, Peter Stone, and his relationship with his father, ADA Ben Stone (Michael Moriarty) from “Law and Order.” We spoke the day after he met up with his “Strike Back” co-star Sullivan Stapleton, so our discussion naturally turned to the new iteration of that series.

You started with the crossover and your second episode heavily featured the “Chicago P.D.” folks. What can we expect when “Justice” is more on its own?

The style of the show is very much like “Law and Order.” We have our investigators, with Jon Seda and Joelle Carter, and they go out and grab the cases and bring them back for Carl and I, and we tackle them.

“See Something” deals with the murder of a Muslim student. It looks like a lot of current events come up in that episode.

That was the first episode that we shot. A great actor named Gary Basaraba plays the defense attorney and we talked a lot about it. We were having conversations with people who were dealing with this issue day in and day out, in Chicago. They were dealing with racial profiling and being told to go back to their country. And they were like, “I was born here. I’m an American Muslim. I was born here. I’m third generation. This is my country.”

Those things were happening while we were shooting this episode. That’s when I kind of cottoned onto the fact that, wow, this is important stuff and it needs to be talked about.

How is Stone’s relationship with C.P.D.? He has a history with Voight.

Yeah, he put Voight away. That tension is the fun stuff to plan, because it’s kind of this pre-existing condition between them. It’s always there. If Voight comes in the office, I know it’s for a reason.

But that relationship, generally, is good. Peter Stone certainly knows when to go after something, when to bulldog it, and when to loosen his morals a little bit. Then there are other times where he’s just not willing to do that.

What’s with his daddy issues?

[Laughs.] Big time daddy issues. Yeah, living under the shadow of Ben Stone is something that he’s always wrestling with. Again, that came because Michael Chernuchin is a great writer. This team of writers that we have on the show saw that. Dick Wolf actually brought it up early on, in the beginning of the year.

I didn’t really know what was going on. I was like “Peter Stone, Peter Stone,” then I realized, “Hang on a second, am I related to Ben Stone?” He says, “Absolutely. You’re his son.”

Are you going to be playing that father-son tension throughout the season?

That’s for me mostly—in building this character. There are still things that are undiscovered for us, as actors, in these roles. When you grab something meaty like that, you go, “I’m definitely going to keep using this, because it works.” It just makes sense, too.

The back story with Peter Stone is that he pitched for the Cubs for a year. Then he threw his arm out and fell back on what he never wanted to do, which is what his dad did—become a prosecutor. He’s a lifer. Peter Stone’s not in this to work his way up and go corporate. He’s in this for the people who need it.

Was his dad not happy with his baseball aspirations?

Yeah, and I think geographically as well. I think he’d rather me be in New York, doing stuff in New York like he did. For Peter, there’s definitely that choice to stay in Chicago and to keep that healthy distance. I think the relationship is less that I played baseball at first. It’s more that I’m doing the same thing and that I’m succeeding in it.

It’s always that thing about relationships with parents—it’s complicated. In my eyes, I’ll never be good enough and in his eyes, he’s proud of me but he could never tell me. You know?

You’re not just in the courtroom. You’re getting to dig a little deeper with the character.

Yeah, it’s nice. The bulk of the show is courtroom stuff. And it’s a wrestling match because of the amount of dialogue. … Your just kind of keeping on top of things, before the next speech, or before the next big courtroom day. They are always huge. We’re in the courtroom for 12, 14 hours and it’s a stage.

You mean because the lawyers are acting in the courtroom?

Yeah, absolutely they are. It’s real to life; they take on a different persona in that courtroom.

What’s been more difficult for you? Learning the legalese here or learning the tactical and weapon lessons of “Strike Back?”

[Laughs.] Definitely the legalese. I appreciate the memory muscle that I’ve built in my brain. We’ve chiseled away, over the last six months.

Last night, talking to Sully—I do miss that [military] stuff. I definitely do. But there are a few [stunts for “Strike Back”] I look back on now and I go, “Gosh, would I have done that as a dad? Would I have done that?” Looking at my little girl, would I have jumped out of that helicopter and let them put that bomb pop behind me? I don’t know.

You don’t have to worry about bombs in this, at least not yet.

Not right now, no.  … Look, here’s the biggest difference for me—the tactical stuff mattered. I always try to find stuff that matters to me in the show and for the audience. Ultimately, that’s what it’s about. It’s about our audience.

For “Justice,” the consequences are that these are real news stories. These are things that are ripped out of the headlines, just like “Law and Order.” These stories are close to people’s hearts and there are consequences. … It’s neat to see that coming off the page.

Joelle and Jon get to see the city while working because their characters investigate. Will Peter get out and about?

I don’t get out anymore. I stay in that courtroom and wear a suit. It’s brutal. [Laughs.] My hope is that there’ll be a something in the future …

Are you looking forward to going back to Montana for a while?

I can’t wait. I was back there for three days and I sat in my office, with my daughter and my wife and we just listened to records. It was great. I need to step away. The last month was tough, because we were doing reshoots. It’s hard when that part of your emotional muscle just constantly gets battered like that. There was no end in sight. They kept adding scenes. Yeah, I’m definitely ready for Montana.

I recently spoke with Dan MacPherson about his casting for the new “Strike Back.” He said you sought him out and congratulated him.

I did. … He’s going to have a great time. Sully and I reminisced last night and we are quite jealous. They’re going to have so much fun.

Readers have asked me your thoughts on the return. You’re fine, right? You did it and you’ve moved on?

It’s going to be great. And I’m done. Maybe there’s a little talk of going over and doing a guest role. We’ll have to see if the schedules work out. I’d totally do that, I think that’d be fun. [Watch: Winchester talks about the end of “Strike Back”]