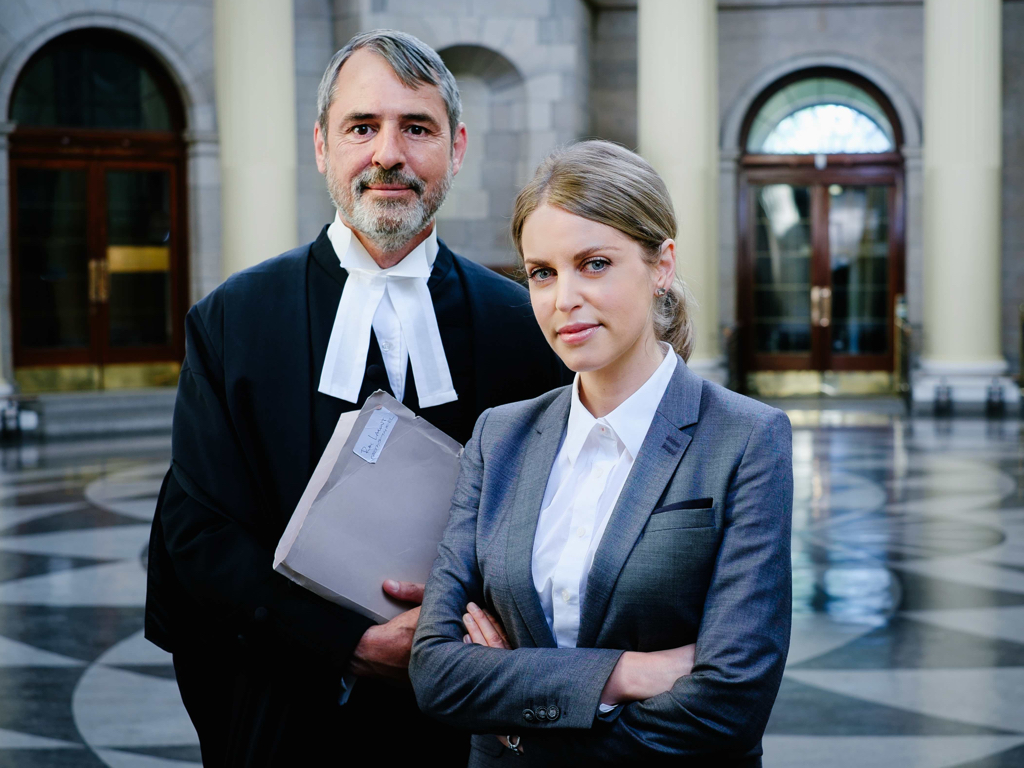 Neil Morrissey and Amy Huberman is Season 1 of the Irish drama "Striking Out" on Acorn TV. (Acorn TV)

‘Striking Out’ stars: Tara’s enemies on attack in S2 of Irish legal drama

Striking Out, streaming exclusively on Acorn TV, boasts the No. 1 drama spot on Irish television, in no small part due to the work of its stars, Amy Huberman and Neil Morrissey.

[Spoiler alerts ahead if you haven’t seen Season 1.]

In the first season “Striking Out,” Tara quit her job at her fiancé’s corporate law firm after she caught him cheating on the night of her bachelorette party. Overnight, her world seemed to crumble around her when Eric Dunbar (Rory Keenan) betrayed her.

As if our heroine didn’t face enough adversity in the four episodes of Season 1, strong forces are rising against Tara and her friends in the new season, which features six episodes.

Her ex’s law firm and its client, a powerful Dublin businessman, are fighting a case against Vincent and her. Her friend and investigator, Meg (Fiona O’Shaughnessy), seemingly has betrayed her. Ray, her sweet associate,  has been framed and jailed. And her romantic interest and landlord, Pete, has been swindled out of his cafe (and her office).

“I feel they’re encroaching on our little world,” star Huberman told me. “They’re kind of coming for us.”

The first season ended with so many cliffhangers, a review seemed to be in order. During our chat in January at the TV Critics Association winter tour in Pasadena, Huberman and Morrissey filled me in on several Season 1 questions and just a teaser here and there about Season 2 of “Striking Out.”

I’ve broken the edited transcript into sections with my own intro to each. Stick around for the biggest Season 2 reveal at the end of this story. And if you want to hear about Huberman’s adventures in Chicago several years ago, click this related story: “Amy Huberman remembers fun times in Chicago.”

Vincent and Tara, both actors agree, have known each other for years. Morrissey believes Vincent lectured at her law school where they met initially. After graduating, she more than likely began working with him to help him handle cases where he was either attempting to help the “little guys” or trying to stand up to the “big guys.” His current case involves a huge corporation and missing money from the funds to build a hospital.

Neil Morrissey: So that relationship is old and he adores her. He thought she was an absolutely brilliant student. He actually says at one point when he has a small disappointment with her that she was the best and he tells her, “I can’t tell you how much that’s hurt me, what you’ve just done.” There’s a relationship there that’s just beyond the professional as well. It’s an adoration.

NM: It’s a glass of wine and a meal at the house, or we go out together to discuss our own lives as well as the ramifications of casework.

Certainly Vincent’s in love with her, but it’s unrequited and he knows it can never happen. So he doesn’t push for it at all, he just prefers to keep her close because he enjoys her company, enjoys being around her and with her, and also really loves her mind. Had he been 30, 20 years younger he may have been a bit more pushy and tried that thing But because Vincent has this marriage to a society woman, it hasn’t worked out. We never meet the wife, but she’s in the exposition and she kind of knows I give too much attention to and talk about Tara a hell of a lot—but not in front of her.

Eric broke Tara’s heart by cheating on her right before their wedding. But as we see in the Season 1 finale, the exes appear to be teaming up to stop this threat against Tara. Eric’s dad, Richard (Paul Antony-Barber), and their firm are representing businessman Nigel Fitzjames (Michael James Ford), who is a subject of Vincent’s inquiry.

NM: There’s no love lost between Eric and Vincent.

AH: No, there’s definitely not. But it’s compromising for Eric and it’s compromising kind of for everyone. Because, well Eric is part of the Dunbar [firm], and it’s his dad’s. But yes, [Eric and Vincent] really don’t like each other. For years it’s just been a work thing, but I think Vincent is very protective of Tara as well.

AH: Their worlds are kind of knotted together this time.

Tara doesn’t want much to do with Eric either, right?

AH: She doesn’t—but she can’t avoid him, she can’t escape him. And I think she’s doing her best to manage her world, but it hurts that this is the guy she was going to marry. He keeps coming back and keeps coming back, and she’s just like, “Ahh!”

NM: There’s no one who knows Eric better than Tara. So all these exchanges that do happen, whether they be on a professional level or happen chance, have an intimacy that Vincent refuses to see.

AH: Yeah. I like that. I always love those exchanges.

Ray Lamont is one of my favorite characters in the series. A young gay man who seems to have been brought up in the Irish equivalent of foster care, Ray knows how to get into trouble. But, as Morrissey said during our interview, his “crimes” come from a place of caring.

It’s also simply refreshing to see a gay character on TV who isn’t only his or her sexuality. Ray is a fully realized character. Emmet Byrne plays him with a lot of charm and heart.

“He’s brilliant,” Morrissey said of Byrne. “What a talented young man he is.”

In Season 1, Ray met both Tara and Vincent because his case was assigned to Tara as a pro bono job when she was still at the Dunbar firm. Initially wary of lawyers, he wasn’t cooperative at first. But when he recognizes Tara is dealing with some troubling personal issues, he’s there for her. When she goes to her old office to collect her things, he’s already waiting for her. He also convinces cafe owner Pete (Brahm Gallagher) to let her set up her new practice out of an office in his back room. (Bonus Season 2 casting on Ray’s storyline: Maria Doyle Kennedy will play his lawyer.)

AH: The way they wanted to film it was that you kind of didn’t see him, his reveal came later, it was like I had a guardian angel while I was going through all this kind of trauma. That he then kind of becomes quite protective of her and they help each other.

He helps her so wonderfully early on. It’s almost like he already knew her.

AH: It’s like he’s more knowing at the beginning, isn’t it? But they don’t know each other, so they form an unlikely friendship. Tara becomes very protective of him, like he is of her. And he’s had these struggles and upheavals in his life, but he’s great and he’s whip smart. He kind of slots into our world really well and brings another great dynamic to it.

NM: He sort of gives himself a job.

AH: Yeah, he gives himself a job.

NM: Even his crime at the very beginning was done for noble reasons, wasn’t it? The man who brought him up, the one man who didn’t abuse him, and all the money that he takes from the social benefits for the old fellow whose died, he’s pumping into a charity for homeless children. It all comes from a noble start which is why Vincent starts to really adore him.

He and Vincent do become good friends as well.

NM: I kind of get pushed into helping Ray out early in the series. Ray kind of disses Vincent; he doesn’t really want to talk to him. They end up, of course, being very close.

AH: You guys have got a great relationship.

NM: And he ends up having a fantastic relationship with him, because he spots the intellect and the spark of life—a joie de vivre. It’s about what Ray represents. It’s gotta be difficult enough to be out [as gay] in Dublin anyway, but he’s getting arrested for completely different reasons. But then Vincent sees the complicated character of him and the reasons why he’s done all of this. Ray starts to really like Vincent because in court, he stands up for him in a really good way and gets him off that particular crime early on. And that’s where it builds from. It builds from adversity.

Tara gives an impassioned speech in Season 1 in which she talks about how important it is for the privileged to help the people who nobody will help and many overlook.

“Nobody, whatever their position in life, nobody loses their right to … dignity,” she says in court.

Although that speech comes after she’s lost everything, Huberman believes that Tara, despite working for a corporate law firm before her life changed, “had an element of that humanity to her.” Losing Eric fanned that spark into a flame, but Tara realized something else that was even more important personally.

AH: I think when we meet her and this has all happened she probably realizes that she did see everything a certain way. And even though this has been really hard for her, its probably been the best thing that has happened to her because of that.

NM: I’ll remind you of a line from Series 1 when Tara is out of the firm and realizes that had she not stepped away from that situation, all her life …

NM: … was totally mapped out with this corporation and with doing the odd bit of pro bono work. And now you’re much more having to fight for yourself and do the cases that the privileged don’t have to handle.

AH: Exactly, exactly. And she becomes really grateful for that because even toward the end of that series when Eric wants to get back together, she says, “I would never have met these people. I would never have been on the journey that I’m on now, if you hadn’t done that.” So there isn’t really any going back.

Pete (Brahm Gallagher) might be out of Tara’s life.

When last we saw Tara, she was having some wine and tease with cafe owner Pete on his boat. They were about to dig into the fish he’d prepared for dinner when Tara got a call that Ray had been arrested. So she takes off, leaving Pete on his on.

What happens to Pete and why is Tara kissing Moe Dunford—who plays Sam Dunbar (recognize his last name?)—in the Season 2 trailer?

NM: This is great—good question. And over to you [Amy].

AH: Because I … Good question, oh my God poor Pete.

She doesn’t even eat his fish!

AH: I know, I know! What does that even mean, it sounds so weird?

So look, life is tricky and it’s complicated, that’s all I’m going to say. And then people come to town and he’s really interesting—Moe’s character. Yeah, so things get kind of—actually, they don’t. They become less complicated, but it becomes good fun for Tara. [Laughter]

Is Pete still around?

AH: Maybe. Do you want her to end up with Pete?

I kind of do, yeah. Although I have yet to see Moe’s character.

NM: Mo is such a brilliant bloke, I’d never met him before. But we have friends in common. I was texting him because I was watching Vikings while sitting in Sri Lanka. I was texting Moe going, “You evil bastard!”

AH: Really? He’s the sweetest person in the world.

NM: Yeah, he is so the nicest man.

Phyllis Logan lets her hair down for Girlfriends