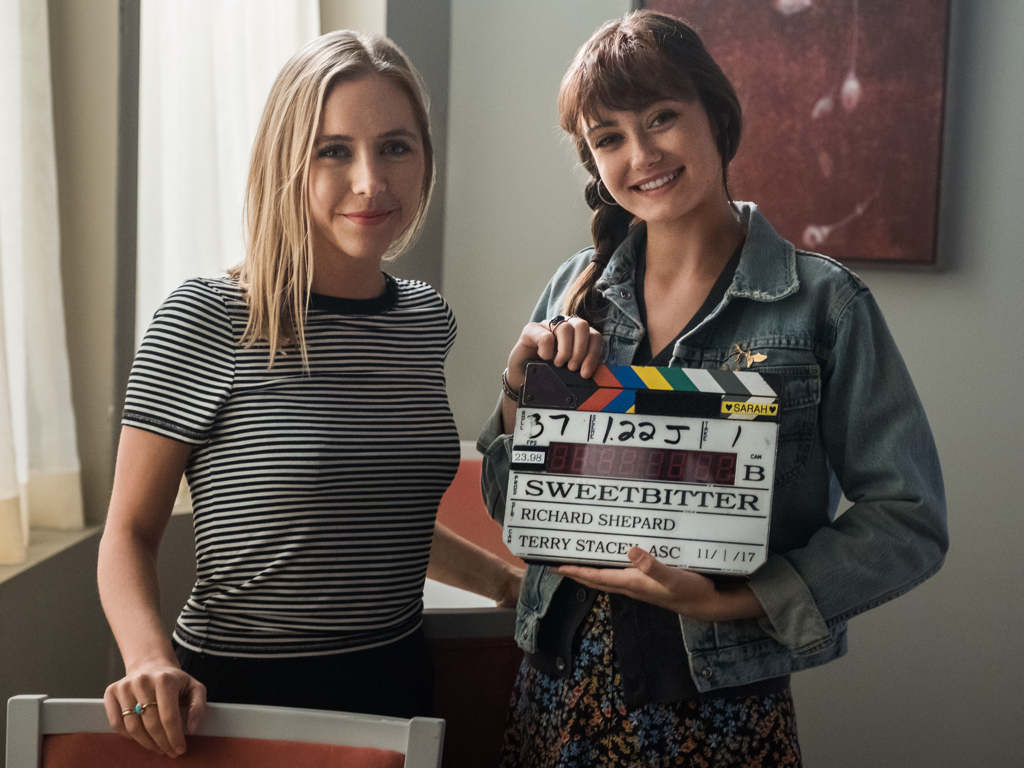 Stephanie Danler’s first novel, Sweetbitter, shot to the top of bestseller lists when it was published in 2016, finally giving 20-something women everywhere a heroine who was making her own way in the world just as they were.

With the book’s success, it didn’t take long for Hollywood to knock on Danler’s door. Starz prevailed in a competitive bidding battle, and Danler began a new journey as a first-time TV writer and producer.

“The depth of my ignorance before I came on to this set cannot be overstated,” Danler told me last December just before she would begin learning more new skills in the editing process.

Everything worked out, though: “Sweetbitter,” the TV series, debuts at 8/7c May 6 on Starz.

The series, like the book, is set in New York’s high-end restaurant scene where Danler had worked for most of her adult life. Her main character, Tess (Ella Purnell), moves to the big city where she comes of age in that same sensuous and “debaucherous” restaurant world.

The six-episode first season slows things down, and covers only Tess’s arrival in New York and her two weeks of training for her new job. And yes, viewers will see Tess’s sensual awakening, too, through her interactions with food, wine and men.

Danler and I talked about her transition from author to screenwriter, Tess’s journey in the first season, and the show’s appeal to people of all ages.

You agree “Sweetbitter” is a millennial show, but you see it as more, don’t you?
Yes, of course. We went through this with the book. The millennial genre, and I’m using air quotes, is really interesting because it’s extremely powerful. There are young women who so desperately want to see themselves represented in media, in books, in television and movies. They want to be represented with integrity and not just trivialized or be made to seem superficial and aspirational. These young women want to see themselves as the heroes of the story, which is what I think we don’t see that often.

“Sweetbitter” is an ensemble in many ways. You have characters that range from 18-year-old Santos, who’s a dishwasher, to Howard the general manager, who’s in his late 40s. So it runs the gamut of experience. It’s not millennial-centric at all.

But I do think that’s why millennials responded to the book in such a powerful way, and I think they’ll respond to the show in the same way.

I was that age, I think, at one point. I would think it can resonate with anyone who’s had the experience or currently is having it.
Yes. I do think that this idea of the first time in your life when you have autonomy over yourself is powerful. Whether you’ve moved to Columbus, Ohio—and that’s your big city—or you’ve moved to Europe or to New York, the first time you really feel the power of making your own choices is something that every single person has gone through. This idea of youth and a very gentle nostalgia for it, I think, is the access point for so many people to the story.

When you were writing the book, was TV even in your mind?
[Laughs.] No.

I didn’t think so.
Yeah, when I started meeting with people, I said very honestly, “I’ve never watched TV.” I remember my agents sent me a bunch of pilots to read and to watch, and I was like, “Oh, wow! ‘Orange is the New Black,’ ‘Transparent,’ ‘Girls.’ These are very interesting shows.” Never had seen them.

So I’m in the middle of this whirlpool, but I have no frame of reference, because I never wanted it. [The show] was this opportunity that was presented to me, and I would have been an idiot not to work with these people who are so smart, and offering to teach me how to produce television. But it’s completely surreal.

What has the transition from novelist, which I assume is very lonely—well not lonely, but you are working alone …
Oh, it’s very lonely!

… to this kind of experience, which is much more collaborative with na group of people?
Stephanie: It’s been exciting. I approached this as a different project. The collaboration, and the sense of community, and the intensity of the work ethic reminds me so much of working in restaurants. I’m very familiar with this team mentality that develops, and the intimacy that is quickly fostered, and then disappears. It is like working in restaurants. It just blows even that experience out of the water.

The writing is so different, and it was a new skill set. I can’t even compare it to novel writing. I sat down with all of these brilliant people who had this 360-degree view of my story. Everyone’s so smart! This is so much easier than being alone with yourself, battling all day.

Yeah, I have no complaints about the transition. It’s just very, very different.

Have you had the instance of having to fight to keep something from the book in the show? Not to say you get precious about maintaining what’s in the book, but sometimes?
Yes, of course. But I’ve also had the opposite, which is something that I had to cut from the book fit naturally into the story we’re telling over six episodes. So much of “Sweetbitter” the book had to be contained to the first person, to Tess’ point of view and what she was able to see. To be able to really expand and look around her was great because there was so much that I had wanted to write [for the book] that I didn’t get to.

But yes, I definitely have moments of being precious. This show is so different from the book. It’s true to the characters, and the landscape, but the plot shifts. [The show] has no loyalty to the plot in the book. So, every now and then I find myself fighting for a moment that’s just for my readers. You know?

Maybe we could have totally blown by it. But I really wanted some important moments to remain. For example, in Episode 2, Tess gives a monologue about inviting John Lennon to her birthday. And, there were many times where we were like, “How do we get to this moment? Is this exactly what she needs to say?” But, that’s the book. It’s direct from the book. And, there are moments like that in every episode.

Are you incorporating the poetry from the book into the series?
I don’t call that poetry, personally. I call that a chorus, which is meant to be the sounds of dinner service. The snippets of dialogue, misheard and conversations that never finish. And, we have found a way to get that cacophony into the show.

Tess’s exposure to the restaurant world parallels her new life experiences—as you said, a lot of first times. How do you make that happen visually as opposed to in your writing?
We wanted the show to feel like a sensory assault. We’re trying to make it feel sensual from everyone angle, whether she’s tasting wine or a new dish. The lyricism of the prose is translated through all of our colors and sounds and sights and also through Ella’s face, which is so deeply expressive.

Are Ella and the rest of the cast what you envisioned for your characters?
Absolutely. Every single person that we cast was someone that I had a gut reaction to and felt very sure about. I hear it’s quite normal that there often is a lot of conversation and a lot of differing opinions. But I felt strongly about every single person we hired. It’s been extremely gratifying to see how good they are. I’m so in love with this cast.

Every director who has come on has been blown away by them. A few months ago I would have never said this, but scripts barely matter. It really is watching these actors take it and run with it. It’s been incredible.

I used to work in restaurants, and I love the kitchen confidential part of it. But what’s more important to you: telling the story of the restaurants, or Tess’ personal story? Or, do you see them not separated?
I’ve never been that interested in writing a restaurant tell-all, or in covering the ground that we’ve seen covered so often by memoirs and by reality television. We’ve seen that chef-centric, testosterone-driven, screaming-in-the-kitchen [story], which is often quite true.

I was more interested in this woman’s experience in restaurants, which is something that’s a lot more sensuous and softer. It’s based around wine. It’s based around polishing glasses and silverware. It’s quieter and more beautiful than I think we normally see.

So, it’s really about her coming of age, which happens to take place in a restaurant, which is a world I love and struggle to do justice to. You’ve worked in restaurants; it’s a very special world. Not many of us would go back to it because it’s so hard. But when we remember it, it’s a very pure time. And debaucherous.

You’re dead on with that. I remember the pressure but also the fun.
That’s the thing—it’s a very fun job. Most of our jobs don’t involve so much laughter.

How do you manage to make such full characters so many years after you’ve had that experience yourself?
I worked in restaurants from ages 15 to 31. I’ve never had another job. So, as I was writing it, I was still encountering these types. Whether it was the emotionally unavailable bartender, or the matriarch server who had been there forever, or the new girl who just moved here and thinks that she’s going to get a temporary job. I would watch these 22-year-olds fall into the lifestyle and I would think, “You’re going to be here for 10 years. Just wait.”

I was not far away from it while I was writing. Ever.

How autobiographical is the book?
Every experience in that book is authentic, but all of the characters and the plot are totally made up. That’s the simplest way to say it. There’s never been a Simone in my life. She sounds a lot like poets that I love, and sometimes like my therapist. I was very different from Tess when I was 22, but everything in the book is true.

You were untested in the TV arena. What made you feel you could do it? How has the network been through the process?
Stephanie: Well, the first question, how did I think I could do it, is I had incredible support. I couldn’t have done it. [Production partner] Plan B Entertainment and Stu Zicherman, my showrunner, and I developed this for a year. They were so patient with me. I would try scripts. I would re-write and re-write the pilot, and they guided me. I never, ever could have just been in a room alone, and produced this pilot.

And Starz has been a dream. [Read more about Danler’s take on Starz in my Emmy Magazine story.]

You are a producer, too, another new experience. How has that experience been for you?
It’s just such a mess and I never sleep. [Laughs.] It’s very thrilling, and will take me years to recover. I’ll be like, “What happened?” I think there are many points in which I could have taken a step back, and said, “I don’t need to be so involved.” But that’s not my personality. So I have been involved in everything.

We’re just getting into editing now. As soon as I felt comfortable producing and being in production, and shooting, I start learning this entirely new language. [Laughs.] … I’m slowly learning. Maybe by Season 3 I’ll have it down.