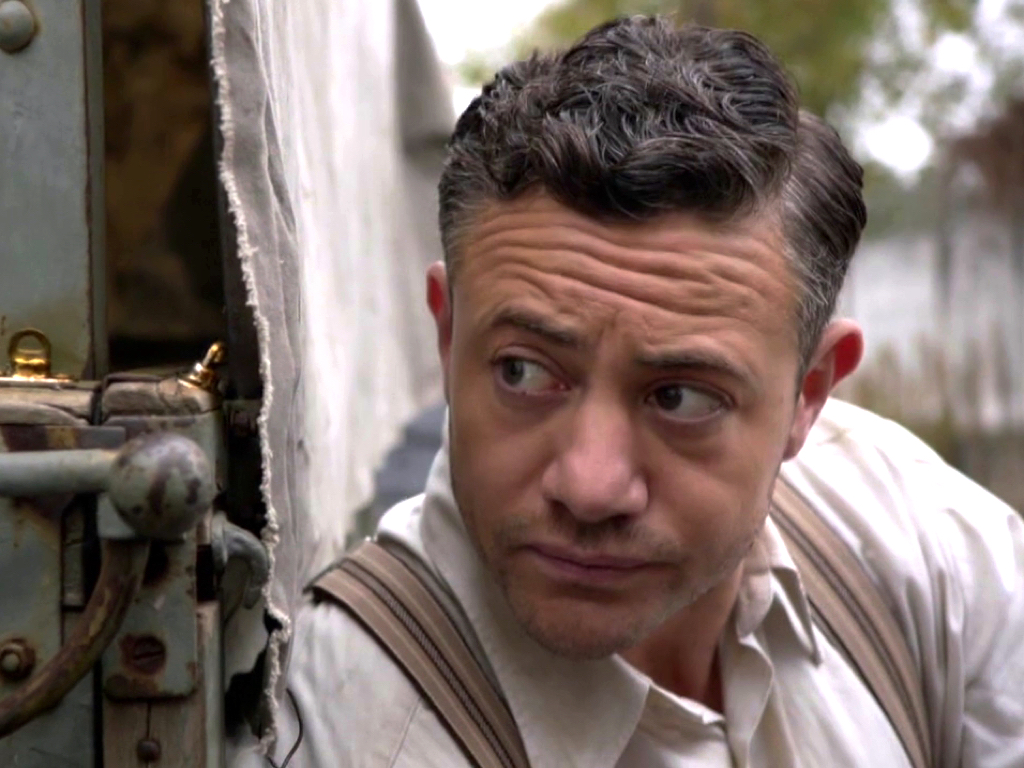 Warren Brown doesn’t see too many similarities in the characters he plays in the military drama Strike Back and the Canadian period drama X Company.

One is a modern day counter-intelligence operative, the other a World War II spy. Both could be called “Mac”—in fact one is. And both men deal with a personal tragedy that sets them off on dangerous missions.

“There are certainly coincidental similarities,” Brown said during a recent interview, before joking: “They look very similar. They’ve both got the same head, but a slightly different fashion sense.”

The series tells the story of agents from Camp X, a real spy training camp in Canada during WWII. Brown’s character, along with four other spies to run missions against the Nazis in France.

Brown and I talked more about Neil, his co-stars and how “X Company” launched his love affair with Budapest, Hungary, where he has since filmed “Strike Back.”

The history of Camp X is fascinating. There’s probably much more we didn’t even know about it.

That certainly was something that I knew nothing about. And when you find out that not only did this place play such a huge part in the Allies winning World War II, but also a huge part of Canadian history. You look at some of the alumni and [James Bond author] Ian Fleming is rumored to have trained there, and [the author] Roald Dahl. So, yeah, I was fascinated with that. And to play a character who joins this team of spies behind enemy lines in a period piece [was great]. We’re slugging it around with braces [suspenders] on.

Did some of these undercover missions happen?

You guys explore your characters well, too. It’s not just a run-and-gun action thing.

It really does explore the human side of war—on both sides. The good guys and the bad guys—if there are such things—because it’s all about perspective.

It was just a really great team working on it, too. It was very near and dear to Mark [Ellis] and Stephanie [Morgenstern], who created the show, because they knew so much about [Camp X]. They shot a short film about 16 years prior to even starting “X Company.” So, it’s something that they’d had kicking around for a while.

We worked with them and it was fantastic, and just got on great. We had a great team with a real international feel. There were people from America working on it, people from Canada, England, a load of Hungarian actors. We had French and German actors. I just had some of the best times doing it.

Tell me about your character, Neil.

I play Neil Mackay, who was previously a Bobby in England. He has kind of traveled around, worked with the police in London and then also has worked with the riot squad in Shanghai. Neil knows martial arts. He knows how to fight; his specialty is close quarters combat and weapons. He’ll often teach that within the team. I think that all the characters learn bits from and teach other members of their team.

Some of the characters are loosely based on real people, and Neil was inspired by a guy called William Fairburn who actually worked at Camp X. He was the combat and weapons expert who taught self-defense and combat.

Neil has been personally affected by the war. He lost some of his family during the London Blitz. [This makes him] very to the point; kill or be killed is the way he sees it. He’s there to get the job done and he certainly does take it personally.

That’s how he enters this role. They’ve all been plucked from their other jobs for their different sets of skills and knowledge to become part of this team to help win the war.

Is he sort of driven by revenge then?

There’s certainly a personal element to it. For sure. Angry? I can play angry. But it’s more that he just hasn’t got any time for pissing about. He just wants to get in there and get the job done and not think about it. He’s tasked with getting the blood on his hands so that other people don’t have to. He’s the executioner, if that is warranted. That is his role within the team.

Does he start to see the gray areas of war throughout the season?

He’s certainly going in there going, “100 percent, the Germans are the bad guys. That’s all I see.” He sees it in black and white. But in a later episode, when they capture a German soldier, he’s tasked with getting information from him. As the series unfolds, his actions there come back to haunt him. He starts to see that everything isn’t as black and white as he thought.

You play Neil here and Mac in “Strike Back.” Which guy has the best weapons?

Come on, Mac. [Laughs.] They’re more modern; they don’t jam as much. Yeah, the old guns are a bit of a fucker to operate.

I do love that you guys get to use some fun period gadgets—pre James Bond toys.

Young Harry has those, yeah. He’s the tech wizard. He  improvises and makes bombs and things.

I wonder if some folks realize such things existed at the time?

One of the things with this is you forget that there was no internet. What they were doing was with very limited intel. Camp X was all about the birth of spy craft. So everything that we know today, including the James Bond era—this was the very beginning of it. This was spy training school. And there were men and women doing this for real during World War II, and since then.

Behind the lines spies also fascinate me because you have to wonder where these folks found the courage.

Our crazy convention in this show is that if we’re pretending to be German, we speak German. If we’re trying to pretend to be French, we’ll speak with a French accent. I would have much rather have learned the French.

I think they just didn’t want so much of the show to be in subtitles. I had to learn quite a bit of German that hasn’t left me, it’s still drummed in there. All the great German [guest] actors we had speaking German.

Was this your first big project away from home?

That’s fair to say. I’d done “Luther” but that was shot at home. But doing a series away for a long period of time, yeah, that was the first. It was just such a great time.

Everyone on it was great, but certainly the five of us who were thrown together as this team felt a bond. Not that it’s comparable to war, but certainly that experience of being away from home and thrown into a situation is similar. And everyone relished it.

That core of five got on and still we’re super, super close. Handsome Dustin, who plays Tom, lives out in LA and I stayed with him just before Pasadena. We all speak intermittently, which is one of the amazing things I’ll take from the show. Just a really good gang; really lovely folk.

Your production schedule for the show was pretty intense I hear?

TV nowadays doesn’t fuck about. “Strike Back” was ridiculous, too. The pace was fast for “X Company.” It was a big scale production shot on location. We had period vehicles, big fights with tanks. The scale was bloody epic. But that was a great thing about shooting in Budapest because it can look like anywhere in the world. We had great studio facilities, but being out in some of the locations that have just been untouched was just like walking out of a time machine. It was just like you were there. We had an incredible design team, which makes your job so much easier. You just feel like you’re there.

Budapest is used for so many productions now. It can sub for 1940s cities and also current cities.

It’s just so versatile. I’ve been there for four years now and I have mates shooting other things. There’s a job called “Jamestown” that was on Sky I had friends on. “Blade Runner” was there while we were shooting “X Company.” “Colette,” a Kiera Knightley film, was just done there recently. “The Terror” was there just after we’d been there.

I just feel like they’ve got everything. Obviously, “Strike Back” had been there before and we shot the bulk of our season there. It just pretends to be bloody Russia, Berlin, Paris and Poland for “X Company.” It’s a chameleon.

After doing these two shows, do you feel like you’ve been schooled on the evolution of spycraft and warfare?

You always learn stuff doing a job. I’ve been lucky; I’ve done a couple of military things. I’ve got friends that have been in different forms of the military, so I’ve always had an utmost respect for them. But I think when you submerge yourself in a job and you start to do even more research it just gives you even more of a respect and more of an understanding. And while you can never say, “Oh, I know exactly what it’s like.” You come away with nothing but respect for the men and women that do do this job, whether that was in the 40s or whether that’s today.

Learn more about the characters at Ovation