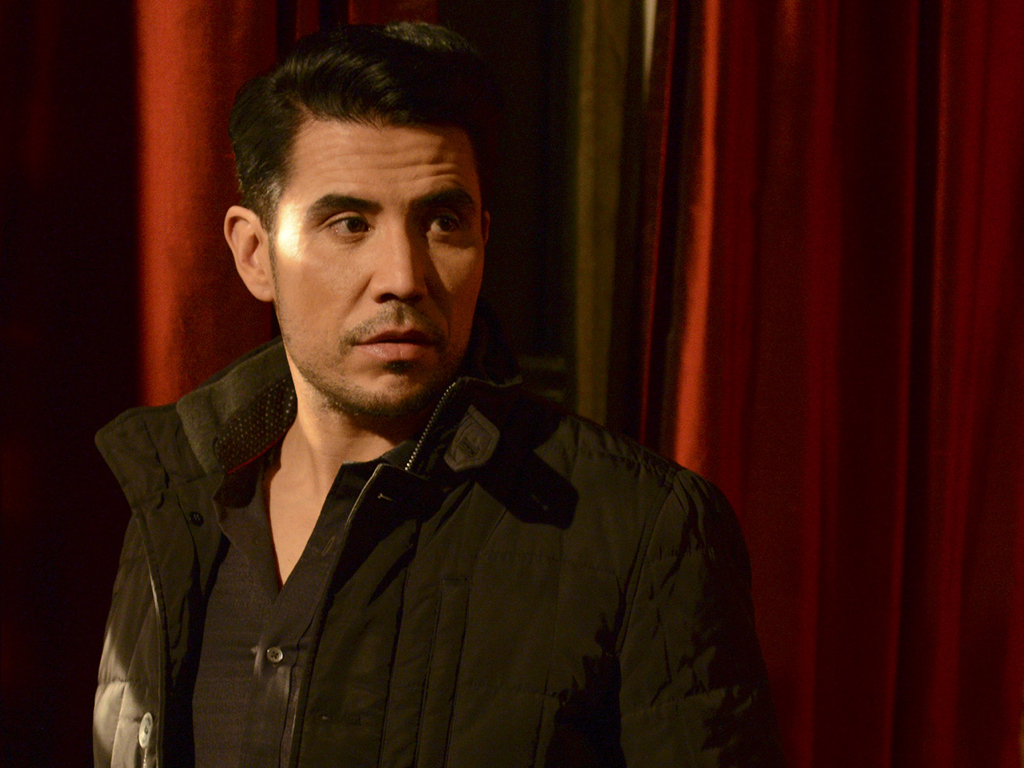 “I was in love with the … fact that Chuy’s just a guy. He happens to be Hispanic. He happens to be gay. He’s fully developed with feelings and emotions. He’s in a loving relationship. He’s married. He’s a whole person,” Saracino said. “That was my excitement when I read for the role.”

In the latest episode of the supernatural series based on the novels of Charlaine Harris, Chuy and his hubby of a thousand years, the angel Joe, told their fellow Midnighters that Chuy is half human and half demon.

During a phone conversation before the episode aired Sept. 4, I told Saracino I believed his character was a demon. He offered no hint that I had figured out Chuy’s secret.

“I’ve read a lot of interesting theories online,” he said before changing the subject. Later in our chat, he agreed that Chuy and Joe share a Romeo and Romeo love story. (Read: Pair of Romeos in ‘Midnight, Texas.’)

The duo had to come clean in the “Angel Heart” episode because another fallen angel flew into town to hunt down Joe (Jason Lewis). Bowie (Breeda Wool) and Joe used to slay heaven’s enemies together, before Joe met Chuy and “betrayed” Bowie, as she seemed to believe.

The episode revealed how Joe and Chuy met. Joe intervened when Chuy was getting beaten up by attackers. What wasn’t clear to me was when Joe learned Chuy was a demon.

“Joe didn’t know he was a demon until he saw the black [demon] blood,” Saracino said Tuesday during another phone chat. “As far as Joe knew, he stepped in to help a person getting beat up and robbed of his shoes.”

Joe fell for Chuy despite him being half demon, Saracino said, partly because of Chuy’s decision to live a life of pacifism. In the episode, Joe explains to their friends that when he asked Chuy why he didn’t turn demon to dispatch his attackers, Chuy said, “Maybe they needed the shoes more than I did.”

“That shows what kind of person Chuy is,” Saracino said Tuesday. “That line really solidified for me Chuy’s strong character and how he has resisted his demon side through positivity and pacifism.”

Chuy showed his stereotype-busting character again in the episode. After a failed attempt by the other Midnighters to banish Bowie to hell, Chuy was all that was left between Joe’s survival or death. Despite the danger his demonic transformation posed to him and his fellow Midnighters, Chuy went full demon and killed the bad angel.

“Every time the Midnighters fight a villain they are united by their love of each other,” Saracino said, adding that Chuy had to turn demon for his friends. “They all choose to live there and they stay and fight for the family that they’ve chosen.”

The fight will continue next week, when NBC airs new episodes at 9/8c Sept. 11 and 12 before wrapping up the first season on Sept. 18. Saracino said even though Chuy is having a hard time fighting the tearing of the veil—not unlike Lem and the Rev are—he will stick around Midnight to help in the coming battle against evil. But it won’t be easy.

“At this point in time, the shit’s really going to hit the fan,” he said. “We’re talking about this world ending.”

Saracino and I talked more about Chuy as man and beast, as well as how the character breaks a couple of Hollywood stereotypes, and what he thinks of Grandma Xylda.

Chuy (Bernardo Saracino) outed himself as a demon in the “Angel Heart” episode.(NBC)

On Chuy’s decision to embrace non-violence:

“Chuy has learned throughout his lifetime—which has been quite some time—that it’s never to our benefit to be extremely reactionary. He has chosen to be a pacifist. That’s the part of Chuy that I fell in love with when I read the scripts.”

On the affect killing Bowie will have on Chuy:

I think Chuy knows how dark he can get. That’s why he’s always trying to stay positive and seeking love. To know that you have that amount of darkness inside of you—it must be a struggle to keep it at bay. It’s an internal struggle because it’s not who he chose to be. So he wasn’t happy to [transform and kill Bowie], but he did it to save those he loved.”

On the makeup for Chuy the demon:

“The makeup took about three hours to apply, but prior to that I flew to Pasadena and they did a body mold and a face cast to have those to create Chuy’s body and face prosthetics. They had to paint and tailor it to my actual face for filming. It fits so perfectly and snuggly I’d forget it was on my face.”

On how cast and crew reacted to Saracino in makeup:

“No one really knew until our table read that he was a demon. For all those episodes we were wondering. … I would forget that [the makeup] was on. Off set we were always talking and these cast members are so funny we’d always be laughing. On those days they’d be like, ‘I can’t talk to you’ or ‘This is too much.’”

On how Chuy breaks one stereotype:

“As an actor of color, what I really loved about Chuy was that he was not written in a stereotypical way. There are very few roles and opportunities for Latin actors—male or female—in American cinema. Less then 3 percent of roles go to Latin actors despite us being the largest minority in the United States.

“So I was used to portraying stereotypes—gang members, drug dealers. I mean, they paid my bills so I have a love/hate relationship with those kinds of roles. But I don’t want the world to see Latin men as only drug lords. I read this and it was a complete breath of fresh air. It was phenomenal.”

“Latin characters on TV don’t have to be drug lords and gay men can be in loving relationships. … I do believe representation matters.”

On how Chuy and Joe bust another stereotype:

“They’re never introduced by saying, ‘This is Chuy and Joe; they’re two dudes and they [have sex]. They’re just two dudes in love. [Their sexuality] is addressed in the show in such a major way by not being addressed. It just is. The veil of Earth is tearing, and that’s not going to come between them.

“Someone might watch this show and realize gay people are not the stereotypes that Hollywood has told people they are, which is A. extremely promiscuous, or B. complete alcoholics, or C. not able to love.”

A final thought on the subject of busting stereotypes:

“If we go to a second season, there are going to millions of people around the world who are going to welcome this couple into their living rooms. And that matters to me. That will have a lasting effect on people who won’t have to be depressed because they’ve never seen anyone like themselves on TV. Young gay men and women will grow up watching this supernatural show with their families. A show that was not meant to be political, but gives them representation. I am humbled by that.”

Breeda Wool as Bowie the bad angel in the “Angel Heart” episode. (NBC)

Jason Lewis as Joe in the “Angel Heart” episode. (NBC)

On what the veil between hell and earth tearing symbolizes to Saracino:

“All of us as humans are at such a fragile point because the veil—or the ground we stand on—is constantly in flux. We forget that everything … we hold valuable and near and dear is so fragile. We choose to avoid thinking about that, because we’d go crazy if we didn’t [ignore it].”

“To me that’s the most beautiful part of human existence, that we are able to find the beauty in what is fleeting by avoiding what is happening.”

On what he hopes viewers get from watching Midnight, Texas:

“I hope people find a good hour of entertainment and escapism. It makes them happy. But I also hope they get the subliminal message we have in ‘Midnight’ about family and coming together. …

“I hope people take away the idea that family doesn’t necessarily have to be blood relatives. It also can be the people that you choose to surround yourself with and who have your back and who love you and vice versa. They accept you with all your quirks and you accept them—simply because love is the answer. What I would like people to take away is to choose love and to see the beauty in every other humans around you.”

On what he brought to the role of Chuy:

“Chuy’s a little bit guarded and private. He’s not at the restaurant every night; he has a life he keeps to himself. I brought that level of being cognizant when you do and don’t allow people into your world. And outside of that the ability to find self love and peace within your own existence in a world that, because of the way one perceives it, isn’t welcoming. But finding a level where you can reconcile your peace and your self love and finding that place in your heart.

“As we started filming, I knew [Monica Owusu-Breen] had spent much more time with Chuy than I had. So I asked her to tell me more about how she saw him. She talked about how he has this level of self love against all odds, which I think is part of our human journey and part of my tapestry, too. I lost my mom and sister when I was a kid; my grandparents raised my brother and I.

“We’ll find out later that Chuy has had a lot of loss in his life. It was really existential moment for me when I learned this. I kept thinking, ‘How on Earth did these writers know that I could relate to Chuy at this level?’

“I remember living under a black cloud [after my family loss]. A lot of people don’t realize there is a level of shame, kind of, to being motherless when you’re a kid. You don’t want anyone to know. I would avoid talking about my mother or sister. I thought if I told people they died then they would treat me like a wounded puppy. … When you’re a kid you don’t want that kind of attention.

“There are a lot of levels of Chuy’s existence that he had to hide in order to go unnoticed. That resonated with me because I’ve done the same thing.”

And finally, on Manfred’s ghostly grandmother:

“I love her. Grandma Xylda [Joanne Camp] is like my spirit animal. I want a talking cat and a Grandma Xylda. I would be so happy. Wow, that says a lot about me.”