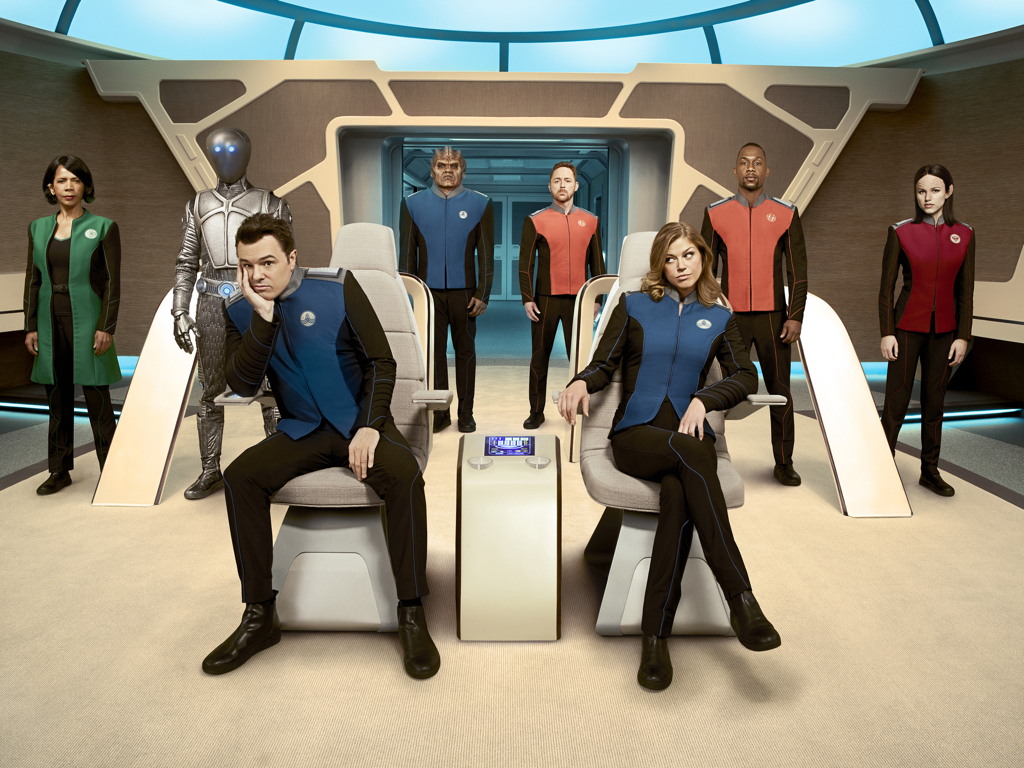 Only three new shows debut on the Fox fall 2017 schedule: superhero series The Gifted, space dramedy The Orville and paranormal comedy Ghosted. Watch all the trailers for Fox’s new fall and midseason shows below. (Update: Fox has released premiere dates for the fall shows. They are listed below.)

Fox previously announced it will air a new season of “The X-Files,” but did not announce when it will air.

Find a list of the shows Fox has planned for next season below, followed by the fall schedule and show descriptions.

“The Gifted” tells the story of a suburban couple whose ordinary lives are rocked by the sudden discovery that their children possess mutant powers. Reed and Caitlin Strucker are typical middle-class parents dealing with the realities of raising a family. However, when their teenage kids, Lauren and Andy, are involved in an incident at their high school which reveals they are mutants, Reed and Caitlin do all in their power to protect their children.

Forced to go on the run, the Struckers must leave behind their old lives to flee from a relentless government agency that tracks down mutants, the Sentinel Services, which includes Agent Jace Turner. Complicating matters further is the fact that Reed is a prosecutor in the district attorney’s office tasked with going after mutants. Desperate and running low on options, the family’s only choice is to contact an underground network that helps mutants in trouble.

The mutants in the network—Eclipse/Marcos Diaz, Blink/Clarice Fong, Polaris/Lorna Dane and Thunderbird/John Proudstar—are dealing with their own issues. With one of their members in prison and their team possibly compromised, they face an uncertain future in a world that looks increasingly dangerous for mutants.

In the 25th Century, Earth is part of the Planetary Union, a far-reaching, advanced and mostly peaceful civilization with a fleet of 3,000 ships. Down on his luck after a bitter divorce, Planetary Union officer Ed Mercer finally gets his chance to command one of these ships: the U.S.S. Orville. Determined to prove his worth and write a new chapter in his life, Ed finds that task all the more difficult when the First Officer assigned to his ship is his ex-wife, Kelly Grayson. As the new commander, Ed assembles a qualified, but eccentric crew:

Somehow, Ed and Kelly must put the past behind them and, with the help of the crew, navigate fascinating and sometimes dangerous adventures in outer space, as well as the tumultuous and captivating day-to-day personal relationships with their colleagues.

Single-camera, action-comedy follows the unlikely partnership between two down-on-their-luck polar opposites tasked with an even more unlikely mission: saving the human race from aliens. Leroy Wright is a cynical skeptic and former missing persons detective, who, if we’re speaking frankly, thinks that “aliens” are a big ole bunch of B.S. and that people who believe in them are certifiably nuts … People like Max Jennifer. Max is a genius “true believer” in the paranormal who’s convinced his wife was abducted by aliens.

At low points in their lives, both Leroy and Max are recruited by Captain Ava Lafrey, a take-no-prisoners, former Air Force test pilot and head of the Bureau Underground, a secret government organization investigating paranormal cases. Lafrey, along with her staff—Barry Shaw, an overly friendly forensic pathologist, and Delilah Ward, a highly opinionated tech specialist—will support Leroy and Max in their quest for answers. Now, this heroic group of underdogs will look into “unexplained” activity in Los Angeles that often leads them to scary, thrilling and hilarious places, as they attempt to uncover the truth and keep the earth rotating on its axis for at least one more day.

Fast-paced drama explores lives and careers of first responders—cops, paramedics, firefighters—who put their lives on the line to save others. The series is based on the real-life, high-pressure experiences of emergency response providers who are thrust into heart-stopping situations that are equal parts unpredictable, intense and uplifting.

Dr. Conrad Hawkins is one of the best doctors at Chastain Park Memorial Hospital. Charming, arrogant and only a third-year resident, Conrad does everything in the most unconventional way possible. Along with treating patients, Conrad believes it is his job to burst the illusions of first-year residents, like Dr. Devon Pravesh, and turn them into real-life doctors. Devon is an innocent idealist, who wears his finely tuned moral compass and passion for science like armor. With Conrad’s help, however, Devon quickly discovers the reality of his chosen profession is not what he imagined, and that ethical lines are often blurred. Nothing, not even the best medical school in the country, could have prepared him for what he’s about to learn.

As Devon accompanies Conrad through the hospital’s halls, he meets other at the hospital. Distinguished chief of surgery Dr. Randolph Bell is the face of the hospital and its most sought-after doctor, but his diminishing skills and the errors they cause are covered with the help of allies under his command. Dr. Mina Okafor, a rising star surgeon from Nigeria in the U.S. on a visa, threatens Bell’s dominance. Nicolette Nevin, one of Chastain Memorial’s most respected nurses, is Conrad’s on-again, off-again romantic partner.

While Conrad opens Devon’s eyes to the stark realities of hospital life, the once-optimistic young doctor soon realizes that the practice of medicine is a business, like any other. Not all patients are angels and not all doctors are gods, but one thing’s for sure: expectations are meant to be shattered.

Welcome to Jackpot Airlines, a budget carrier whose junket flight from LA to Vegas and back again, is filled with dreamers looking for that big score. Holding (or, more to the point, barely holding) these voyages together is Ronnie, a long-suffering flight attendant who tries to keep her cool (oftentimes, with little success) whether she’s dealing with a bi-polar bride-to-be or the dead body in Row 13.

Managing the revolving door of bachelor parties and 21st birthdays gets even trickier when Ronnie develops a “location-ship” with Colin, a regular passenger and an economics professor, whose son and soon-to-be ex-wife live in Vegas. Further complicating her job every weekend is Captain Dave, the narcissistic pilot whose fighter-pilot dreams never quite worked out; Bernard, the always-positive career flight attendant who thinks there’s no flight more magical than the LA-to-Vegas; Artem, the genial professional gambler who serves as the plane’s resident (but unofficial) bookie; and Nichole, the sweet-natured, part-time stripper who’s a lot savvier than people realize.

It won’t be easy, but this unlikely group of miscreants and dreamers will eventually go from being strangers on a plane to a supportive, if unconventional, family … from Friday to Sunday … whether they like it or not.