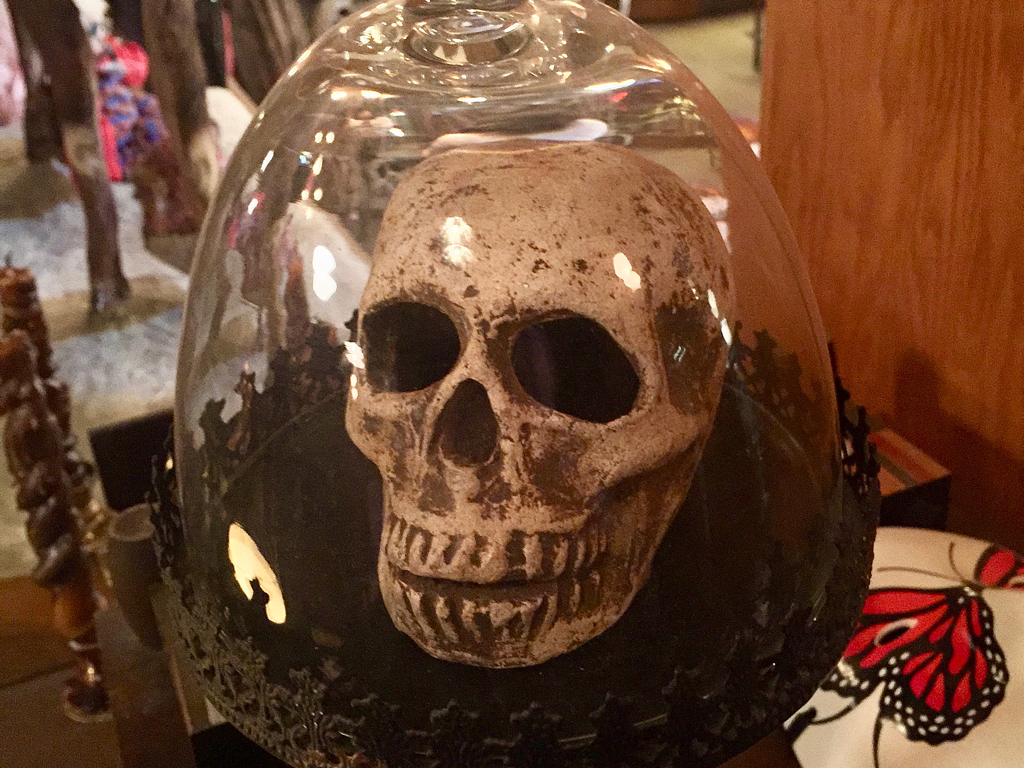 A tour of the pawn shop set for "Midnight, Texas" revealed a skull under glass. (Curt Wagner)

When Dylan Bruce began filming Midnight, Texas last year, he had to master his character’s habits, tastes and surroundings.

During a late January visit to Albuquerque Studios in New Mexico, Bruce talked about getting used to running in cowboy boots and nailing his Arkansas accent, among other demands of the job.

But just as his human character Bobo Winthrop has to adjust to all sorts of supernatural neighbors in Midnight, Bruce had to get comfortable in the pawn shop Bobo owns on the show.

“It’s a freaky place to be,” he said, adding that Bobo only works in the 24-hour pawn shop during the day.

Bobo’s partner, a vampire named Lemuel (Peter Mensah), works at night. “Lemuel works the night shift because that’s when the shady characters usually come into town, to pawn their crazy items and stuff like that,” Bruce said.

Plus, he’s a vampire—so daylight isn’t good for him.

When asked what items in the pawn shop are the creepiest to him, Bruce couldn’t seem to decide on just one.

“There’s a doll missing arms, and one missing an eye,” he said. “And an ancient baby carriage. The bear with bullet holes is kind of creepy.”

He said the set designers were always adding to the store throughout the season.

“There are tons of clowns in there,” he added. “There’s this creepy demon ghoul skull face.”

When Midnight’s newest resident, psychic Manfred Bernardo (Francois Arnaud), first steps into the shop in the season premiere, he can hear the dead owners of different items chattering away. He has to tune all the noise out just to speak to Bobo.

Bruce said many of the items become more relevant later in the season.

“A lot of other relics in there have historical relevance as well,” he said. “I won’t give that away, but when you research what a certain thing is, you’re like, ‘Oh, that is terrifying. It is absolutely terrifying.’”

I took these photos while visiting the “Midnight, Texas” set in January. (Click on first photo and you can scroll through manual slideshow.)

This must be the “creepy demon ghoul skull face” of which Dylan Bruce spoke.

She talks to Manfred.

Despite all my rage I am still just a spine in a cage.

No doubt this bear used to be a porter.

If Midnight was on water, a mermaid would live there. And is that a bong bottle?

This doll had to be locked up.

Which one of these is … nevermind.

I tried to but that mirror.

Was this buck once a person?