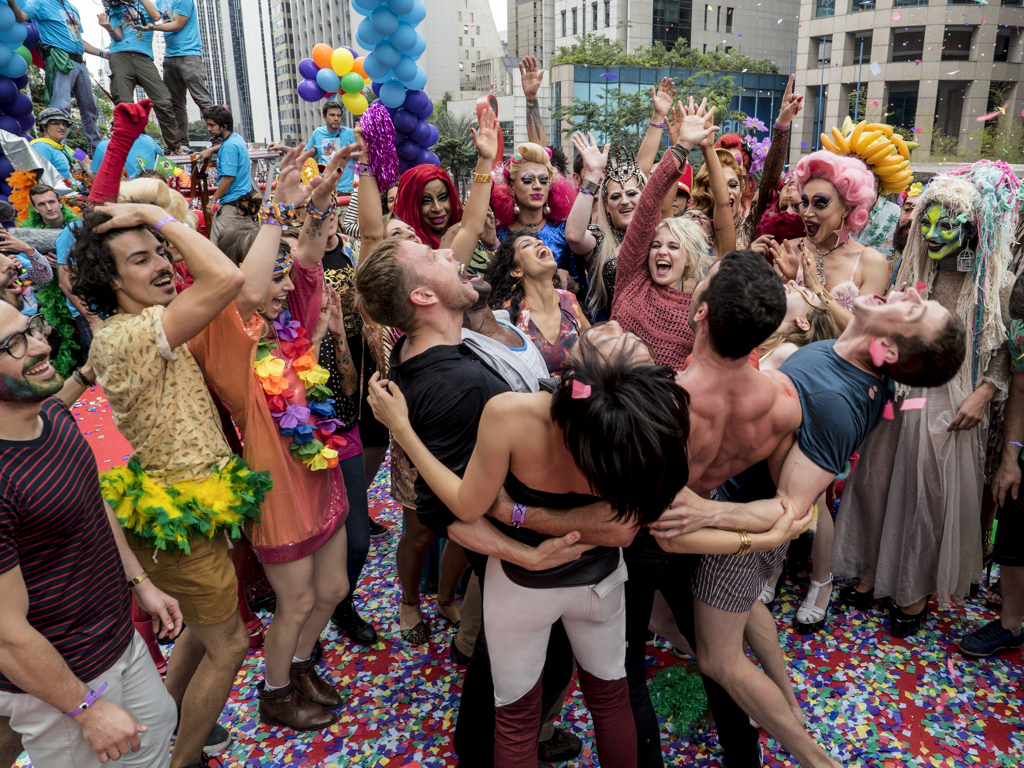 Time to celebrate: Netflix has OK'd a two-hour movie to wrap up the story of "Sense8." (Netflix)

Fans of Sense8 get their wish: Thanks to their efforts, Netflix has approved a two-hour movie to wrap up the story.

“Improbably, unforeseeably, your love has brought Sense8 back to life,” creator Lana Wachowski wrote in a letter released Thursday on the show’s Facebook page. “I could kiss every single one of you!”

When TV Show Patrol first broke the news June 1 that Netflix had canceled the series after two seasons, fans took to social media with anger, sadness and pleas to give the show some resolution. Fans launched petitions on change.org and other places, sent emails and worked on other campaigns. Wachowski took the fan support to Netflix and after discussions, the streaming service agreed to the movie.

“Just as the characters in our show discover that they are not alone, I too have learned that I am not just a me. I am also a we,” Wachowski wrote, reflecting one of her show’s major themes. “The passionate letters, the petitions, the collective voice that rose up like the fist of Sun to fight for this show was beyond what anyone was expecting.”

Wachowski also expressed her gratitude to Netflix in the letter, writing, “Believe me, they love the show as much as we do, but the numbers have always been challenging.”

Netflix doesn’t release viewership data, so fans will never know just how many people watched the series. But according to data from research firm Parrot Analytics, U.S. viewer demand for “Sense8” never matched that of other Netflix sci-fi shows such as “Stranger Things” and “Black Mirror.” It also failed to outperform comparable non-Netflix series, including HBO’s “Westworld.” (You will find two graphics at the bottom of this story showing those results.)

A report prepared for TV Show Patrol found activity around “Sense8” skyrocketed after cancellation news hit. Although a definitive reason can’t be made, the data suggests motives for the Netflix decision to OK a movie.

Parrot compared activity around “Sense8” to that around three other shows Netflix axed: “Bloodline,” “Marco Polo” and “The Get Down.”

“‘Sense8’ is definitely the most popular of the four cancelled shows,” Parrot concluded, “and Netflix may not have been expecting the reaction the news provoked.”

The graphic below plots U.S. demand for the four cancelled Netflix Originals, time-shifted to show the week before and the week after each show’s cancellation announcement on Day 8.

Before the news hit on June 1, “Sense8” clearly had the highest baseline demand of the shows. Naturally, the show had the largest absolute reactionary demand spike once fans began discussing the bad news.

“The Get Down,” however, has the largest percentage change after being cancelled.

“Even if making the call to axe the expensive and poorly performing ‘The Get Down’ … was an easy one for Netflix, the decision to end the more in-demand ‘Sense8’ must have been a much tougher choice,” Parrot concludes.

The series focuses on eight strangers who become linked as sensates. They are able interact psychically with each other, sharing their talents, skills and emotions from across the world.

The eight sensates battle a secret organization that has unleashed a man called Mr. Whispers (Terrence Mann) to hunt them down. He has a connection to their sensate mother, Angelica Turing (Daryl Hannah), and Jonas Maliki (Naveen Andrews), who initially reaches out to Will to help the cluster.

The second season ended with a major cliffhanger involving Wolfgang. It also did not give the characters, or fans, closure.

Lana and Lilly Wachowski (“Matrix” trilogy) and J. Michael Straczynski (“Babylon 5”) created the series, with Grant Hill serving as an executive producer. The Wachowskis wrote and directed much of the first season. Lana Wachowski went solo for the second season when Lilly Wachowski took time off to focus on her gender transition.

Below is the full text of Lana Wachowski’s letter to fans:

I have been meaning to write this letter for some time. The outpouring of love and grief that came in the wake of the news that Sense8 would not be continuing was so intense that I often found myself unable to open my own email. I confess I fell into a fairly serious depression.

I had never worked so hard, or put so much of myself into a project as I had with Sense8 and its cancellation hollowed me out. I felt the disappointment of my amazing crew. (I wish people could understand the impossibilities they achieved with implausible regularity.) I felt the sadness of the actors who had given so much of themselves, always finding more whenever the sun broke from the clouds.

But most of all I felt the heartbreak of our fans. (Again I wish I could cluster with you to share some of the beautiful moments, the hugs, tears and laughter, as well as the insightful and humbling conversations I have had with people who have connected to this show; they are unlike any fans I have ever encountered as an artist).

Friends kept calling from all over the world asking, “Isn’t there anything you can do?” And the truth was, no. By myself, there was nothing I could do.

But just as the characters in our show discover that they are not alone, I too have learned that I am not just a me. I am also a we. The passionate letters, the petitions, the collective voice that rose up like the fist of Sun to fight for this show was beyond what anyone was expecting.

In this world it is easy to believe that you cannot make a difference; that when a government or an institution or corporation makes a decision, there is something irrevocable about the decision; that love is always less important than the bottom line.

But here is a gift from the fans of this show that I will carry forever in my heart: while it is often true those decisions are irreversible, it is not always true.

Improbably, unforeseeably, your love has brought Sense8 back to life. (I could kiss every single one of you!)

It is my great pleasure as well as Netflix’s (believe me, they love the show as much as we do but the numbers have always been challenging) to announce that there will be another two-hour special released next year. After that … if this experience has taught me anything, you NEVER know.

Thank you all. Now let’s go find out what happens to Wolfgang.

A toast to fans: The cast of “Sense8” in a scene from season 2. Netflix will wrap the show with a movie. (Netflix)