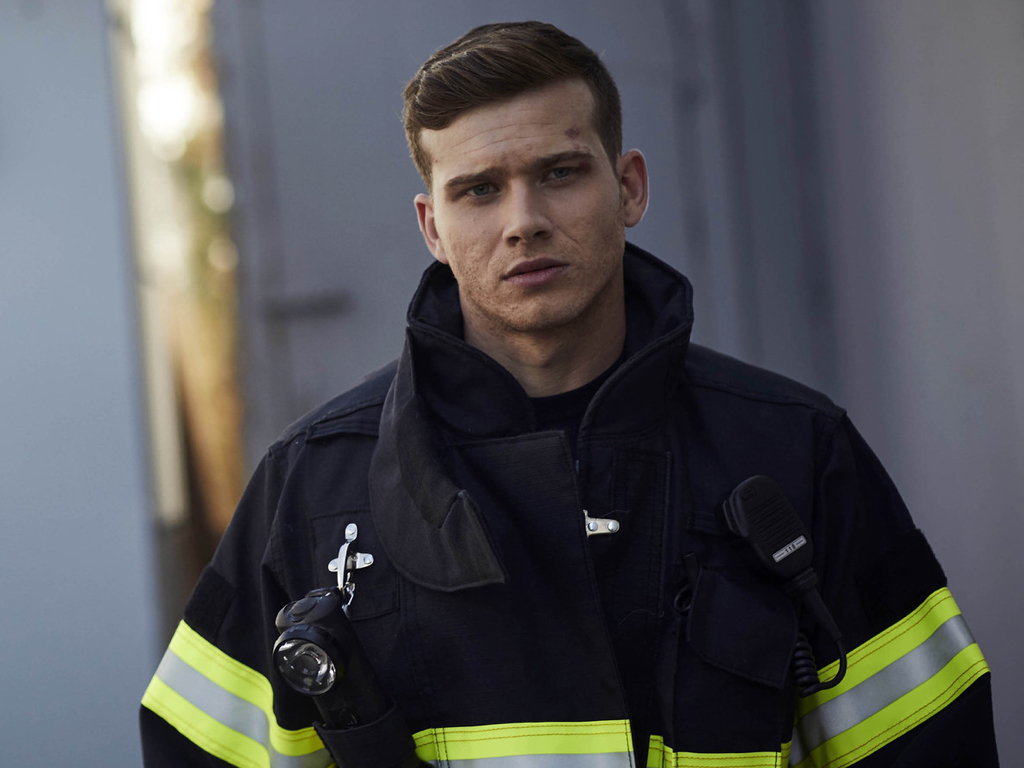 Oliver Stark spent a year without work between Into the Badlands and his new show, 9-1-1. Late into that year, he says, he thought about changing careers and becoming a firefighter.

The London native admitted the story sounds like a lie, but during an interview last week at the TV Critics Association winter tour in Pasadena, he told me several signs suggested he’d co-star in the new Ryan Murphy-created series.

“I promise you [this is true]!” he said. Besides his interest in exploring firefighting as a career, he was watching the Hollywood Reporter Roundtable video discussion with Murphy when he received an email about the “Audition for a new Ryan Murphy show.”

He received a third sign when he went to his audition.

“As I stepped out of the Uber, a fire engine with its sirens on went blaring past me,” he said. “I just thought, ‘OK, great, this one’s mine. I can relax, the universe has got me.’ ”

Whether it was fate or coincidence (and his story is tall tale or truth), Stark landed his firefighter role in “9-1-1,” which was created by Murphy and Brad Falchuk.

Stark, who played Ryder in AMC’s “Into the Badlands,” stars as Evan “Buck” Buckley, a cocky young firefighter who, in the series premiere, was fired after taking one of the fire engines to a booty call.

Eventually Buck was reinstated, a second chance that Stark says changes his character’s attitude about his approach to his job.

“His evolution comes quickly,” he said. “Very early on in the second episode something happens that really jars him and really settles him and makes him start to realize his responsibility and the importance of the job that he has.”

In that episode, titled “Let Go,” Buck struggles with the life or death nature of being a firefighter after his firehouse responds when a rollercoaster at an amusement park malfunctions. It airs at 8/9c Jan. 10 on Fox.

Although Stark has yet to train with any real firefighters, the cast does work with advisers who are real first responders. He’s done his own workouts so that he’s fit enough to make everything look authentic. He hopes eventually to train with firefighters, and expects to “be humbled by it very quickly.”

While he hasn’t trained with firefighters, he said a valuable part of his preparation was meeting several first responders at a fundraiser recently where they told him and co-star Choi some of their own stories about the job.

“It was really inspiring to hear them talk about their own experiences,” he said. “I hope what we’re doing is mirroring what they go through. That was really rewarding.”

Stark talked more about Buck, “9-1-1” and how all the incidents in the show are based on real cases first responders have faced.

You said after “Into the Badlands” you wanted to find projects that had some kind of importance to them. Do you think you found that?

Absolutely. It’s such an opportunity to shed light on what first responders do. … We don’t have to call first responders very often, so we take them for granted. I know firefighters exist, but I don’t think of them on a daily basis. I think we take them for granted and so the opportunity to bring awareness to what these people actually go through—and I hope that’s what we’re portraying—is incredibly rewarding and exactly the kind of thing that I wanted to do.

When did you learn you landed this show?

What kind of firefighter techniques or facts have you learned that surprised you?

For one, I’ve learned that 80 percent of calls that firefighters go on are medical, when nothing’s actually on fire. Here in LA, if you call 911 you get a firetruck—if it’s medical or not. You don’t get an ambulance, you get a firetruck. So I’ve realized that the firefighters here are pretty much all paramedics as well. They’re not all, but most of them are, which I think is incredible.

It’s just more of an insight into what these guys actually go through and how often they go out on calls. … Here they are 24 hours on call and 24 hours off. But I’ve learned just about the intensity of their work. Also that when they’re on a job, if things go awry they have to improvise and go off the book. That they’re all capable of doing that is an incredible thing.

Most of the story lines are incidents pulled from real cases?

Every 911 call that we go on has happened.

Later in the season, we saw in a teaser, a rebar goes through a driver’s head and he’s still able to speak and respond.

I had to Google that one, because I almost didn’t believe it. But it happened twice, according to my Google search. A thick metal bar has gone through someone’s skull so perfectly that it’s not damaged anything and they’ve been fine. It’s almost too unbelievable to be real. If you just wrote it and made it up, you’d say, “That’s silly. That’s too Hollywood.” But they’re all real; it’s all true.

You guys should do a thing at the end that says, “Find the real case by searching here” because some are so unbelievable.

Yeah—“Based on …” And it’s kinda nice, you know, to look on Twitter and see people say, “Oh, you can’t flush a baby down a toilet.” It happened! And if anyone sees that direct Tweet, to be able to answer back and say, “No, it was real. Here’s the video. It’s on YouTube!”

You said something happens coming up that solidifies Buck’s belief in what he’s doing?

It’s a duel with morality, and realizing the importance of the lives he holds in his hands. He realizes if he makes a mistake people can actually die. It’s a real blessing as an actor to get to show that kind of transformation so early on in the series.

From week two, you’ll see a different side of Buck. That’s great because the “cocky lad” thing can only go so far before you start really disliking someone. So immediately he gets a chance to say, “No, I’m a real guy with a real heart and I want to help people.” It was a lot of fun and I was really happy when I read that.

I think my favorite thing about him is that he’s tough and brave. He has a little bit of charm to him but then as you go on you’ll see that he’s also really emotional, vulnerable, and that he’s OK with that.

No, I was going to say the opposite. I’m totally emotional and I cry about stuff, and I’m totally OK with that. I feel like as young man growing up often you’re told that you shouldn’t be OK with that and there’s a kind of type of masculinity that comes from that. So I love being able to push that it’s OK to care and be emotional.

When in the pilot he tells the 911 operator [played by Connie Britton] that she is the real hero, is that a turning point for him?

I think that’s the first time he’s outwardly humble. He shows some humanity where he’s acknowledging that, “Hey, this wasn’t me.”

I think there’s a line in the pilot where he says, “As far as I’m concerned the world began the day I was born.” But, toward the end of the episode you start to see him acknowledge the other people and realize that he can’t do the job by himself. … I think it’s quite grounding for him, and I think it’s what he needs. It was fun to have that kind of light and dark so early on.