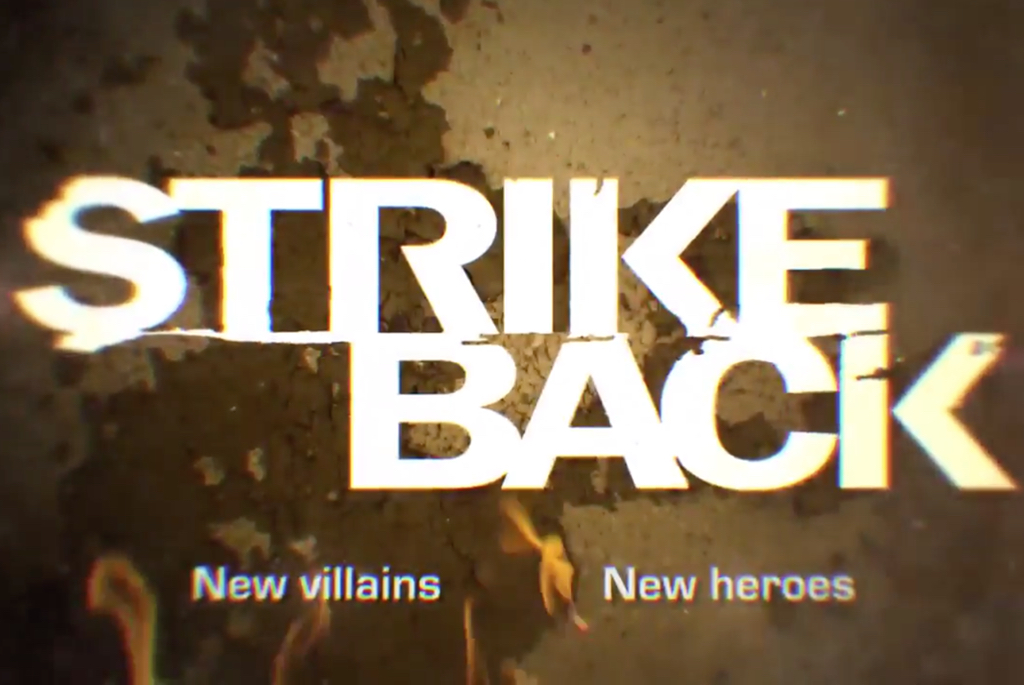 Actor Warren Brown shared footage of the new "Strike Back" season with this title card.

Thanks for the sneak peek, Warren Brown. On June 21, the Strike Back actor tweeted a video showing footage of the upcoming series revival that was filmed earlier this year in Jordan.

He apparently jumped the gun in sharing the footage. By early June 22, the video tweet was replaced with another tweet stating, “Oops … nothing to see here! #StrikeBack.”

Apparently the teaser footage wasn’t meant for fans. His co-star, Daniel MacPherson, explained in this tweet:

Whoever put the video together did I good job, however. The made a title card and added a catch phrase of sorts: “New Villains. New Heroes.”

The two-minute clip gives fans a good introduction to at least some of those new heroes and villains. Brown’s Sgt. Mac McAllister and his possible superior, Adeena Donovan, played by Nina Sosanya, open the tease.

“I’m not here to interview, Sgt. McAllister,” she tells the soldier as he does push-ups. “I’m here to recruit.”

She then explains the Section initiative, which fans of the show know is a somewhat covert British military and counterintelligence program that spawned Section 20, a unit tasked with high-risk operations.

Or as Donovan explains, “Dangerous soldiers for dangerous missions.”

After that, all hell kind of breaks loose in one way or another. Fist fights. Explosions. Shootings. Chases. Waterboarding. Sex.

Looks like the banter between team members is back, too. Philip Winchester and Sullivan Stapleton, who played Section 20 operatives Stonebridge and Scott, respectively, perfected it in the previous series.

Brown and MacPherson, who plays McAllister’s partner Samuel Wyatt, seem to have mastered it as well—although their character don’t seem to get along as well. The video showed Wyatt yelling at McAllister for stealing a jeep that then ran out of gas. Later, McAllister tells Wyatt he once worked with a man just as disagreeable as Wyatt. (Was he speaking of Stapleton’s Scott, perhaps?)

The two Bickersons get called out for arguing a little later, when another team member, Gracie Novin (Alin Sumarwata), asks them, “Why don’t you two just kiss and get it over with?”

Novin and team member Natalie Reynolds (Roxanne McKee) get plenty of terse lines and fight time, too. Looks like the entire cast has trained well on the military tactics and firearms usage.

Michael J. Bassett, who directed and executive produced past seasons, returns for the revived series. He told me that fans should expect the revival to have everything they loved about the previous iteration. And the footage Brown shared certainly had all the exciting aspects, quick wit and sharp banter.

But as Bassett wrote in an email, makers of the new series don’t want to simply redo the old one.

“I consciously looked to separate the new team from old with a different vibe and energy,” Bassett wrote. “Dan and the new team are going to do that. We’re not getting Scott and Stonebridge lite, we’re getting a new set of characters who will play in the same world but do things their own way.”

Now about those new villains. Aussie actor Don Hany looks to be the first big bad. He fires some big artillery in the video, cracks some heads and speaks in a non-Australian accent. (You can see Hany this July in the excellent new season of “Janet King” on Acorn TV; or right now if you’re reading from Australia.)

I’m not clear if the white-haired, white-bearded man who comes under fire in the video is a good guy or bad guy. British actor Trevor Eve, famous for “Waking the Dead” and much more, plays that character named Morgan Ives.

We also got a couple of glimpses at Katherine Kelly, who plays Jane Lowry, in a scarf. The name is all I have on the “Class” actress’s character.

The new season, from Cinemax, Sky and Left Bank Pictures, will air on Cinemax in the U.S. and Sky in Britain at a later date. The actors and crew started filming in April in Jordan and now are in Budapest, Hungary.

The 10-episode season—the fifth for Cinemax and sixth overall—revives the franchise that started in 2010 as a British production. Andrew Lincoln and Richard Armitage played the main characters that season. In 2012, a refurbished series debuted on Cinemax with Winchester and Stapleton playing. They starred in the show for five seasons until Cinemax canceled it.

Showrunner/writer Jack Lothian also returns for the new season and will serve as an executive producer.

Oops…. nothing to see here! #StrikeBack

Season 4: Dustin Clare and his mullet