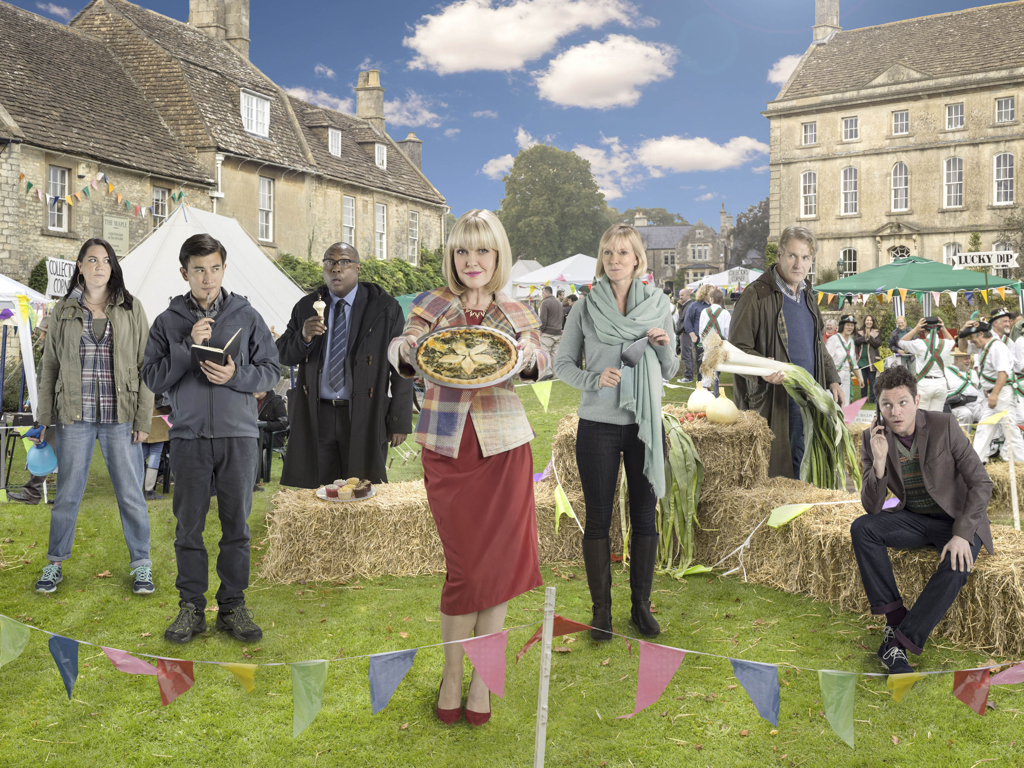 U.S. audiences might recognize Jensen from her roles as Christina McKinney in “Ugly Betty” or more recently as Fran in “Catastrophe” on Amazon. She also starred as Maggie Jacobs opposite Ricky Gervais in the HBO comedy “Extras.”

Jensen is perfectly cast as the title character in “Agatha Raisin,” an exacting London PR executive who decides to live a simpler, less hectic life in the English country. She quits her job and moves to a cozy little village, but she’s having a hard time giving up her love for finer things.

Agatha tries desperately to fit in with the locals but nothing goes her way until someone is murdered. Agatha discovers her knack for amateur sleuthing—or snooping—and before long is solving a slew of murders threatening to ruin her idyllic new life.

The comedy kicks off with a feature-length film titled “Agatha Raisin & the Quiche of Death” followed by an eight-episode first season of hour-long mysteries.

I like posting the monthly lists of premieres on Acorn TV because I’m a big fan of the streaming service that offers TV fare from Great Britain and other countries. You might find some of its series also streaming on Netflix, Hulu or elsewhere, but often they get their U.S. premiere only on Acorn TV.

Check out what’s coming to the service below.

Agatha Raisin & the Quiche of Death

In the feature-length pilot movie, the “Quiche of Death,” high-flying London PR executive Agatha Raisin (Ashley Jensen) fulfills a lifelong dream of retiring to a small village. Desperate to fit in, she enters the local quiche-baking competition, only to find herself a suspect when her entry kills the judge. To save her reputation, Agatha sets out to solve the murder, with the help of her former assistant, Roy (Mathew Horne, “Gavin and Stacey”); eager Detective Constable Bill Wong (Matt McCooey); and her cleaner, Gemma (Katy Wix, “Torchwood”). Along the way, Agatha discovers that she has a talent for crime solving, even if it means her new life in the country is not the quiet idyll she had imagined.

As World War II ends, thousands of British soldiers get “demobbed”—demobilized and sent back into civilian life. Among them are Captain Ian Deasey (Griff Rhys Jones, “Alias Smith & Jones”) and Lance Corporal Dick Dobson (Martin Clunes, “Doc Martin”). Deasey and Dobson have had a “good war,” much of it spent entertaining the troops with their bawdy stage routines. But after serving four years in the North African desert, they find it hard to adjust to peacetime London and long for the stage lights once more.

War and revolution bring poet and physician Yury Zhivago (Hans Matheson, “The Tudors”) together with the beautiful Lara (Keira Knightley), his muse and all-consuming passion. But both are haunted—Yury by guilt over his betrayal of Tonya, his beloved wife, and Lara by fear of Komarovsky (Sam Neill), the powerful man who means to have her any way he can.

The world’s most impossible quiz. On the face of it, QI (short for Quite Interesting) is a TV comedy panel game like any other. It has a chairman (Stephen Fry, “Jeeves & Wooster”) and four contestants, who are asked questions and get points for their answers. But there the resemblance ends.

High-flying London PR executive Agatha Raisin (Ashley Jensen) fulfills a dream of retiring to a small village in the Cotswolds. Along the way, Agatha discovers that she has a talent for crime-solving. In the first season, Agatha finds her hopes of a quiet life are dashed when more murders start occurring in her village. Drawn into their mysteries, Agatha attempts to solve the crimes … often in rather unorthodox ways. Based on the best-selling novels by M.C. Beaton, these eight mysteries shine with humor and intrigue.

Summer School: Algorithms, Calculating Ada, and Secrets of the Universe

Math and science form the foundation of nearly everything we do while also revealing the beauty and mystery of the world. These three fascinating programs delve into unique lives of the celebrated minds in these fields and show how their work affects us even today.

The Morels are a typical family living in Lyon, France. But when their 17-year-old daughter, Léa (Camille Razat), doesn’t return home after celebrating her birthday, the Morels are thrown into their worst nightmare. Mother Florence (Alix Poisson) tries to remain strong for her other children and hopeful that her daughter will return safely. Father Julien (Pierre-François Martin-Laval) begins an investigation of his own. As Commander Bertrand Molina (François-Xavier Demaison) and Lt. Camille Guerin (Alice Pol), search to find the missing teen, secrets hidden by Léa come to light.

This delightful British dramedy features an all-star ensemble cast including Sienna Miller, Alun Armstrong and Timothy West. Set during the half-hour before bedtime, this unique series goes behind closed doors to offer a revealing—and very funny—peek at the nighttime conversations between husbands and wives, fathers and sons, and more.

The Syndicate: All or Nothing

The stately home of Hazelwood Manor has been in the family of Lord Hazelwood (Anthony Andrews) since the 18th century. But the once-impressive manor is crumbling, and a₤6.5 million debt burdens its owners. Lord and Lady Hazelwood (Alice Krige) fire most of the staff, and only five servants help maintain the estate. But when the remaining staff wins the lottery, the lines between upstairs and downstairs begin to blur. Lenny Henry, Cara Theobold, Elizabeth Berrington, Melanie Hill and Richard Rankin also star.

In Series 2, Janet (Marta Dusseldorp) remains devastated by the unsolved murder of her partner, Ash, two years earlier. Her professional life is no less challenging. The attorney general tasks Janet with heading a royal commission into serious firearm crime. Recruiting some of her old team from the Department of Public Prosecutions, Janet investigates how illegal guns enter the country. When the commission discovers evidence related to Ash’s murder, Janet comes closer to finding the killer. But uncovering the truth makes Janet and the high-profile commission a target for criminals and politicians alike.

For more than 500 years, Porterhouse College has cherished tradition above all else. Unfortunately, its traditions mostly involve decadent banquets, drunkenness, and undistinguished scholarship. Based on Tom Sharpe’s uproarious bestseller, Porterhouse Blue crackles with dry wit and bristles with satirical barbs. Starring David Jason and Ian Richardson.