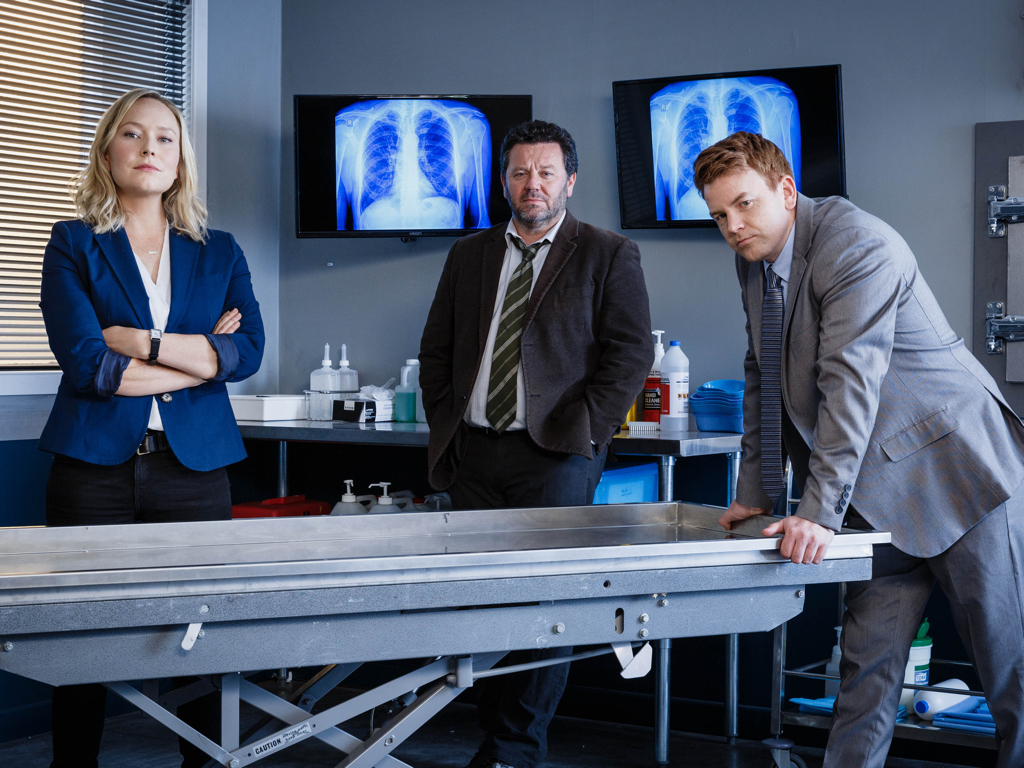 Fern Sutherland (from left), Neill Rea and Nic Sampson star in Season 4 of “The Brokenwood Mysteries.”

As its foreign language offering, Acorn TV brings the French crime drama “L’Accident” to the U.S. And for a special Christmas gift, the streaming service has the exclusive U.S. premiere of the Season 11 premiere of the popular Canadian series “Murdoch Mysteries.”

But that’s not all! See the full schedule below. And if you have never watched the Aussie drama “A Place to Call Home,” here is a video that will catch you up on season 1-4 before you start watching Season 5, currently streaming on Acorn TV.

Despite the growing accord between the mismatched pair of DSS Mike Shepherd (Neill Rea) and his methodical young assistant, Detective Kristin Sims (Fern Sutherland), all is not well in Brokenwood, where passions simmering beneath the sleepy surface regularly erupt into gruesome crimes. Series 4 mysteries involve a fatal skydiving “accident,” the death of the curator of the town’s historic village, a poisoned farmer and the murder of a corrupt financier with a Samurai sword.

Winner of a Royal Television Society award, this BBC One drama offers a warm and humorous “fish out of water” story of Prem Patel (Sanjeev Bhaskar), a high-flying Delhi graduate who comes to the UK with ambitions to work in a top London surgery, only to find himself in a small Welsh village. Set in the 1960s, life in the little village of Rhondda is very different than he expects, and, as a fresh pair of eyes, Prem exposes a scandal affecting the health of the coal miners that many knew about but chose to ignore, and he becomes the focal point for change in a closely knit, working class mining community.

Ashley Jensen stars as Kate Dickenson, registrar who juggles her personal life with the daily drama and trauma of births, marriages and deaths.

Richard Roxburgh (second from right) leads the cast of “East of Everything.”

An Australian drama series from the creators of “Miss Fisher’s Murder Mysteries” and “Newton’s Law.” Having spent most of his professional life wandering the globe in search of paradise, travel writer and prodigal son Art Watkins (Richard Roxburgh) rushes home, too late to be by his dying mother’s bedside. Art hopes to pay his last respects and quickly escape Far Out East, the run-down tropical resort where he misspent his youth. But a twist in the tale traps him there. He has to face his bitter brother (Tom Long), his childhood sweetheart (Susie Porter) and a teenage son he hardly knows. Thanks to his mother’s posthumous attempt to reunite her scattered family, Art discovers that his best chance of happiness is the “paradise lost” he left behind. Series 2 features the unexpected return of their estranged father.

Bruno Solo (center) stars as a widower who thinks his wife has been murdered in “The Accident.”

Rebecca Cauvy’s body is found on a highway ramp in the peaceful resort of Sainte-Luce, Brittany. She was uncharacteristically drunk and parked the wrong way, seemingly the victim of a head-on collision. Her widower, Gabriel, refuses to believe it is an accident. Determined to restore Rebecca’s honor and protect their daughter, he tries to figure out if it was an accident … or something more sinister. The young local police captain, Solène, helps him in his investigation. With suspicions rising and accusations flying, Gabriel risks his life to unlock this intricate web of deceit. Bit by bit, light is shed on the shadows hidden beneath this small crisis-stricken community revealing the truth behind the “accident.”

Morocco To Timbuktu: An Arabian Adventure

New BBC Two documentary follows Arabist and explorer Alice Morrison as she journeys along Africa’s infamous salt roads from Morocco via the Sahara Desert to the legendary city of gold, Timbuktu.

Set in Toronto in the late 1890s and early 1900s during the age of invention, Acorn TV’s hit period mystery series centers on Detective William Murdoch (Yannick Bisson), a methodical and dashing detective who enlists radical new forensic techniques like fingerprinting, ultraviolet light and trace evidence to solve some of the city’s most gruesome murders. In the Season 11 premiere, a jailed Murdoch must prove his innocence amid police and government corruption after the constables are ambushed, Ogden is kidnapped, and Brackenreid goes missing. Inspired by Maureen Jennings’ novels, “Murdoch Mysteries” airs on the CBC in Canada and premieres in the U.S. on Acorn TV before moving to Ovation as “The Artful Detective.”