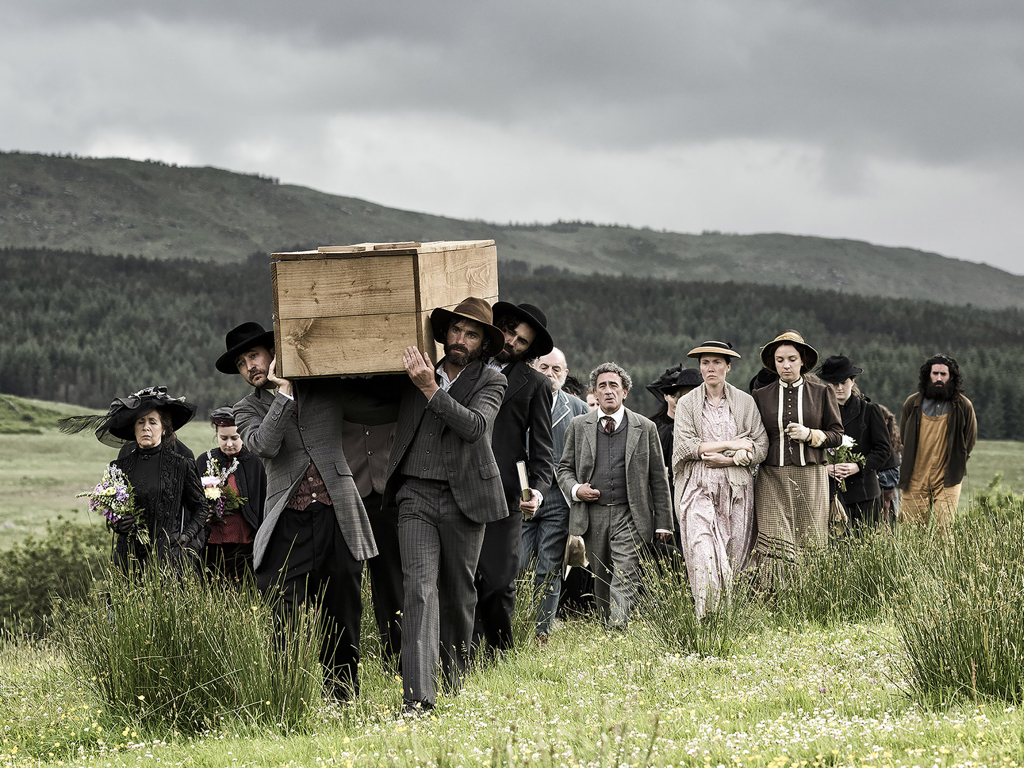 Acorn TV offers more exclusive U.S. premieres of shows and miniseries from Great Britain and beyond in April including the second season of award-winning Irish period drama Dominion Creek.

“Dominion Creek,” called “An Klondike” in Ireland, follows the Connolly brothers as they travel from Ireland to the United States to seek their fortune in the 1890s Gold Rush.

Update: Acorn TV is now available for Android through the Google Play store and Chromecast via its Android and iOS apps in addition to Apple TV, Roku and other devices. The premier North American streaming service for world-class TV from Britain and beyond offers a free trial and thereafter is just $4.99/month or $49.99/year.

Called “a superior game of cops and robbers” (The Sun) and from the acclaimed writer of “Broadchurch,” comes a thrilling drama that is both a classic heist movie and a fascinating real-life mystery. On Aug. 8, 1963, Britain awakens to the news of the biggest robbery in the nation’s history. The Royal Mail train from Glasgow to London has been hijacked, and a gang has made off with millions in cash. Who could have executed such an audacious raid? And who can catch them and get the money back? Part 1 follows the robbers’ perspective, while Part 2changes to the copper’s perspective. Luke Evans, Martin Compston and Oscar-winner Jim Broadbent star.

Broadcast continually on PBS since the 1990s, the lighthearted empty nester Brit-com stars beloved actors Julia McKenzie and Anton Rodgers. Frustrated with his daily commute and clients who don’t pay their bills, accountant William Fields is ready for a change. His wife of 27 years, Hester, is always up for something new, so when William gets headhunted for a job in France, both seem willing to give it a try. (19 episodes)

Patricia Hodge, James Fox and John Standing star in this gripping docudrama about Margaret Thatcher and the British government’s actions leading up to and during the conflict over the Falkland Islands in 1982.

Dr. Bendor Grosvenor and Jacky Klein seek out the work of some of the biggest names in art, lying hidden in local museums and country houses all across Britain. Britain’s publicly owned art collection contains over 210,000 paintings. But at any one time, more than 80 percent of these are locked away in storage. Among this secret treasure trove of mystery paintings sit some of the finest works of art the public owns—but didn’t know they had. There might even be some priceless Old Masters lost in the vaults. Released as “Britain’s Lost Masterpieces” in the United Kingdom.

Richard Roxburgh plays Cleaver Greene, a brilliant barrister battling self-destructive tendencies in this hit Australian comedy-drama. As a lawyer, Cleaver prefers to defend those who are utterly hopeless and probably guilty. An alcoholic and former cocaine addict, Cleaver runs up huge gambling debts and makes enemies of gangsters and politicians alike. Despite his roguish ways, Cleaver’s wit and charm have won him many cases and loyal friends over the years. Series 2 guest stars Toni Collette and Maeve Dermody. (8 episodes)

Caroline Goodall stars as Anne, a successful young lawyer married to a psychiatrist (Mark Strong). While they seemingly lead a charmed life, their marriage is rocked by infidelity, and later, murder.

Genius of the Modern World

After losing her management job following an altercation with a colleague, Jenny Pope (Sally Phillips), her husband Nick (Tom Conti) and their children, Sam and Becky, find themselves in desperate straits when their house is repossessed. They have no choice but to up sticks and move from London to live in Kettering with Jenny’s parents, Len and Alma. Just till the Popes get back on their feet … which may take a little longer than Jenny expected. (6 episodes)

Known as “An Klondike” in Ireland, the drama won four Irish Film and TV Awards for Series 1. Series 2 has been nominated for a record 10 IFTA awards. Owen McDonnell, Seán T.Ó Meallaigh, and IFTA’s Best Lead Actor winner Dara Devaney as the Connolly brothers—three Irish emigrants seeking riches in the American Gold Rush. In the second season, the Connolly brothers are struggling to forge an empire for themselves during the gold rush of the 1890s. They stand united after establishing themselves as a force to be reckoned with in the territory. But against a backdrop of growing lawlessness in Dominion Creek, they must face a challenge that threatens to take from them all that they hold dear—family, friends and gold. Siobhán O’Kelly, Steve Wall and 2017 IFTA nominee Ned Dennehy costar.

Just in case you missed Series 1 of “Dominion Creek,” I include that trailer directly above. The Series 2 trailer is at the top of this post.

Pie in the Sky

Detective Inspector Henry Crabbe (Richard Griffiths) has been a policeman for 25 years, but he’s craving a change. Crabbe finally leaves the force and opens his dream restaurant, Pie in the Sky, with his penny-pinching accountant wife (Maggie Steed). He hopes to while away his retirement serving up his favorite dishes, but his old boss puts his plans on the back burner. Guest stars include Michael Kitchen, Andy Serkis, Pete Postlethwaite, Julian Fellowes, Keeley Hawes, Jane Wymark, Kelly Reilly and Nicola Walker. (40 episodes)

Mystery of the Roman Skulls

Construction workers unearthed human skulls in 2012 and again in 2015 during engineering projects in London. Since the 1800s, people have found hundreds of skulls in the city; it is one of the most intriguing mysteries of archeology in London. Researchers, archaeologists and other specialists reveal their current research and possible explanations for how and why so many skulls have been discovered.