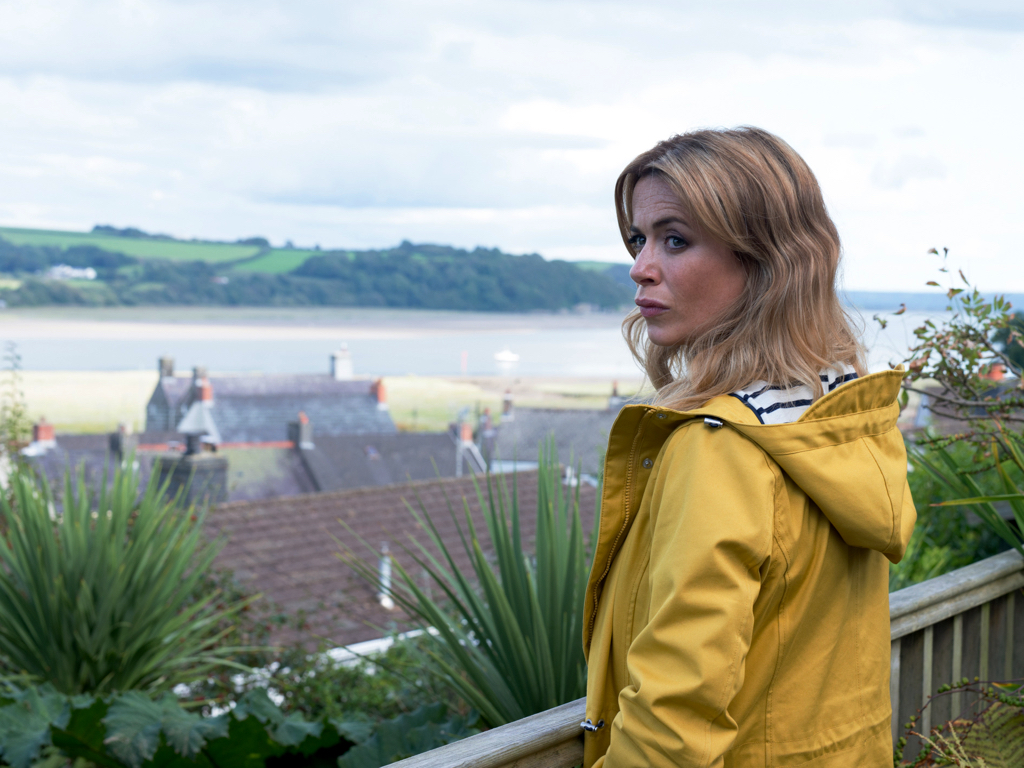 In surprise news, British network ITV gave its streaming partners permission to premiere the 20th season of the long-running hit mystery “Midsomer Murders.” Both Acorn TV and BritBox are streaming the six new episodes beginning May 3. But back to regularly scheduled programming …

Eve Myles of “Torchwood” fame stars in “Keeping Faith,” an eight-part thriller about a working mother who, when forced by circumstances to takes risks, finds a new inner strength. Already a BBC Wales hit, “Keeping Faith” was filmed back-to-back in Welsh and English.

In “Sando,” a charismatic business woman must fight her way back into her estranged family’s life—and back into the boardroom of the furniture empire she founded. “Sando” has been compared to “Arrested Development.”

More old favorites will stream on the service in May. Read more below.

Detective Chief Inspector John Barnaby (Neil Dudgeon) and Detective Sergeant Jamie Winter (Nick Hendrix) investigate the cozy villages for Midsomer’s most sinister secrets. The new feature-length mysteries are “The Ghost of Causton Abbey,” “Death of the Small Coppers,” “Drawing Dead,” “The Lions of Causton,” “‘Til Death Do Us Part” and “Send in the Clowns.”

This thriller tells the story of lawyer, wife and mother Faith (Eve Myles) as she fights to find the truth behind the sudden disappearance of her husband, Evan. She comes to discover that her beautiful, idyllic hometown harbors many dark secrets that threaten the lives of Faith and her family. Faith’s ordeal transforms her from a stay-at-home, fun-loving and carefree mother to detective, action hero and lover.

This popular ITV comedy follows the comfortable middle-class lives of three women—except that, for one of them, life isn’t all that comfortable. Sarah (Prunella Scales) has been left pretty well provided for by her late husband, a doctor called Henry. Unfortunately, she also has been left with her demanding mother, Eleanor (Joan Sanderson), who lives downstairs. Her adolescent daughter, Clare, lives upstairs. Clare craves independence—as long as mother is there to clear up the mess.

British broadcaster, journalist, and author Jeremy Paxman loves the great outdoors and is passionate about rivers. In this 2017 Channel 4 series, he travels down four of Britain’s most beautiful and historic rivers: The Tweed, The Thames, The Mersey and The Severn. On each journey he meets and shares the lives of the people who make them what they are as he champions the heritage, industry, wildlife and entertainment along their banks.

Based on M.M. Kaye’s beloved novel, the star-studded, mid-1980s miniseries marked HBO’s first miniseries. It offered a classic tale of forbidden love set against the spectacular sweep of battle, treachery and intrigue in British India.

An orphan from the age of four, when his parents were killed during the Indian Mutiny, Ashton Pelham-Martyn (Ben Cross) was raised by his Hindu foster mother, Sita, who disguised him as her own son and called him Ashok. After Sita’s death, Ash learns the truth about his biological parents. By this time, he already has pledged his undying affection to a young Indian princess, Anjuli (Amy Irving). Although the two are in love, they are separated by forces beyond their control. Seven years later, Ash, now a British soldier, returns to India, where he is assigned to escort the wedding procession of two Indian princesses. One of the princesses happens to be his beloved Anjuli. The all-star cast includes Omar Sharif, John Gielgud, Rupert Everett, Christopher Lee and Robert Hardy.

“Sisters of War” premieres on Acorn TV in May. (Handout)

“Sisters of War” is inspired by the true story of a small group of Australian nurses and nuns who found themselves in the eye of the storm when the Japanese military made them prisoners of war on the island of New Britain in 1942 during WWII. It is a tale of strength, survival and forgiveness. The Australian ABC TV movie stars Claire van der Boom, Sarah Snook and Susie Porter .

In honor of the latest royal wedding, The Royal Family Documentary Collection launches. Titles included are all streaming exclusives.

The Royal Wives of Windsor

Divorced, mixed race, older, an actress, an American. In the past just one of these factors would have been enough to prevent Meghan Markle marrying a Royal Prince and becoming a Windsor wife. Yet the monarchy and public have embraced her, which shows just how much attitudes in Britain have changed over the last 100 years. This two-part documentary examines what it takes to succeed as a Royal wife, based on the lived experience of 100 years of Windsor women. Broadcaster Jeremy Paxman, historian David Starkey, royal butlers and bodyguards and other notable royal experts appear.

William & Kate: Inside the Royal Marriage

This 2011 documentary reveals what has been happening in the first six months of the marriage Prince William and the former Kate Middleton. It uncovers all the fascinating facts of everyday life for this modern day royal couple.

40 Years of the Prince’s Trust

With unprecedented access to fascinating archive footage and interviews with Princes William and Harry, the Prince of Wales, the Duchess of Cornwall, and pop star and X-Factor judge Cheryl Cole, TV presenters Ant and Dec share the story of the organization’s journey to become the UK’s leading youth charity in this 2016 documentary.

When Phillip Met Prince Philip: 60 Years of the Duke of Edinburgh’s Award

In this unique, 2016 documentary, Phillip Schofield spends time with HRH The Duke of Edinburgh and learning about the Duke’s youth program over the course of its 60th anniversary year. With exclusive access, Schofield explores the work of the charity.

The Real Camilla, Duchess of Cornwall

This 2018 doc gives unprecedented access to HRH the Duchess of Cornwall. The cameras follow Her Royal Highness throughout her 70th birthday year. Viewers are with the Duchess as she carries out her royal duties both at home and abroad, enjoys birthday celebrations with her husband, friends and family and relishes precious down time with her beloved dogs.

This new Australian family comedy stars award-winning actress Sacha Horler as Victoria “Sando” Sandringham, a charismatic loose cannon CEO and public face of a popular discount furniture store chain, Sando’s Warehouse. As Sando tries to reconnect with her estranged family in order to win back her beloved company, she finds both goals might be hard to achieve.

Sando built her empire on being a down-to-earth larrikin and is something of a national treasure—to all but her family. They banished her a decade ago after her one-night stand (and resulting pregnancy) with her daughter’s fiancé was shockingly revealed—at the wedding! Now, after a health scare, her career on a precipice and her professional nemesis, Tony (Rob Carlton) primed to push her into the abyss, Sando is determined to rekindle the family relationship. She needs them, and in spite of their initial apprehension … and unbridled hatred … soon they’ll discover they might actually need her, too.

Distraught after his wife’s sudden disappearance, a policeman (John Hannah) tirelessly strives to discover what happened to her. His efforts seem to be in vain and he’s forced to return to work despite suffering from terrifying hallucinations. He quickly becomes obsessed with the strange case of a man who also vanished mysteriously. Could the two cases be linked, or is he clutching at straws? Jemma Redgrave, Anthony Calf, Patrick Malahide and Brendan Coyle also star in the psychological thriller that aired on PBS’s “Masterpiece Mystery.”

In this adaptation of Tolstoy’s classic, Anna Karenina (Helen McCrory) travels from St Petersburg to Moscow to sort out her brother’s troubled marriage. Whilst there, dashing cavalry officer Vronsky (Kevin McKidd) falls madly in love with her. Anna tries to resist Vronsky’s advances, but they embark on a passionate affair culminating in Anna confronting Karenin (Stephen Dillane) about her affair. Douglas Henshall  and Mark Strong also star in the BAFTA-award winning miniseries that aired on PBS “Masterpiece Theatre.” Alan Cubitt wrote it.

A Place of Execution

Juliet Stevenson, Lee Ingleby and Philip Jackson star in this miniseries based on the acclaimed crime novel by Val McDermid. In it, a young girl mysteriously vanishes from her English village home. Then 45 years later, a journalist making a documentary on the case threatens to shatter the lives of all involved. From the producer and writer of “Homeland” and “24,” the miniseries aired on PBS’s “Masterpiece Mystery!”

Kerry Armstrong stars in this Australian comedy-drama series as a woman trying to handle her life after she discovers her cheating husband has died and left her broke. She returns to her home town of Rainbow’s End to live with her feisty mother, Minna (Julia Blake) and her teenage daughter Holly (Hanna Mangan-Lawrence).

Emma Dabiri and Dr. Bendor Grosvenor search for art in season 2 of “The Art Detectives.” (Handout)

One of the world’s leading art detectives, Dr. Bendor Grosvenor, and leading social historian, Emma Dabiri, track down lost and hidden art treasures to restore, resurrect and rehang. More than 175,000 paintings in public ownership are languishing in storage, and at least 40,000 of these paintings are unattributed. We don’t know who painted them or what their subject is—they are unsolved mysteries. Grosvenor and Dabiri want to bring these ”sleepers” back to life.