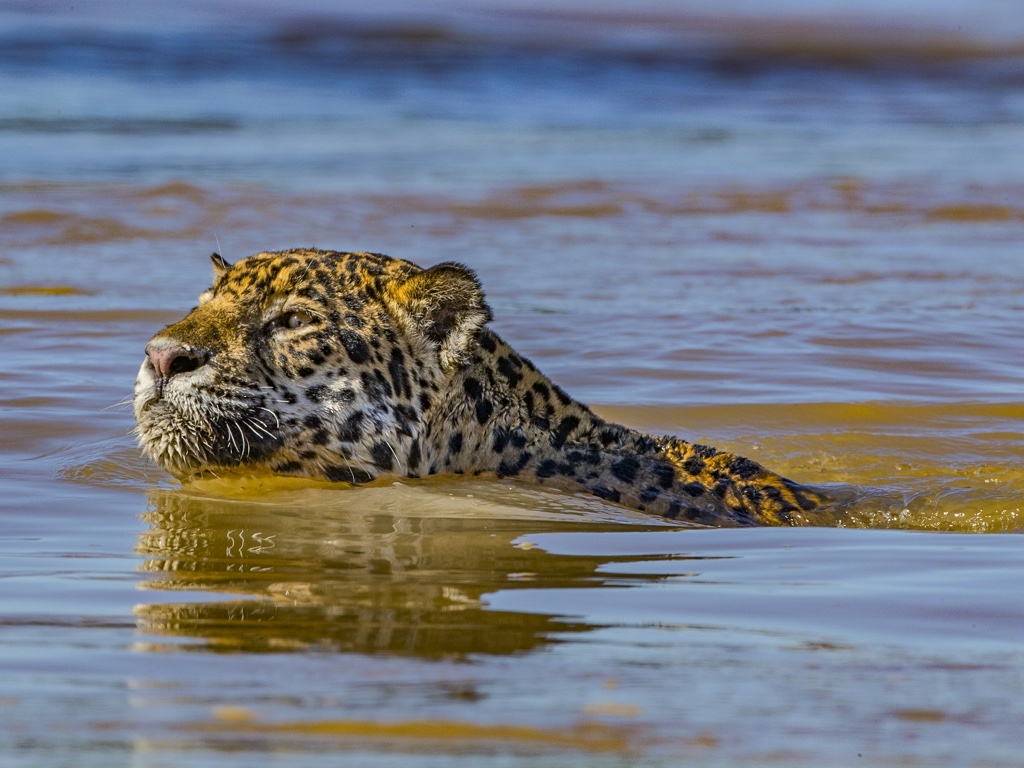 Scarface swims against the current in Pantanal, Brazil, in "Jaguar vs. Croc." (Steve Winter)

Big Cat Week premieres at 9/8c Dec. 10 in 140 countries and 37 languages. The programming event is an extension of the Big Cats Initiative, a long-term commitment by the National Geographic Society to halt the decline of big cats in the wild. This global initiative actively supports on-the-ground research and conservation projects to protect the planet’s top felines. For more information on the Big Cats Initiative and how you can get involved, visit NatGeoBigCats.org.

These new premieres are part of this year’s Big Cat Week. For more information, visit www.natgeowild.com.

This map shows the populations of wild cats around the world.

World-renowned wildlife photographer Steve Winter and cameraman Bertie Gregory capture the rarely seen, remarkable lives of jaguars in the Pantanal of Brazil. Follow a mother jaguar as she teaches her cub survival. Meanwhile, a determined male jaguar, appropriately named Scarface, dives headfirst into the river to tackle the deadliest of opponents—a six-foot long caiman. Clever capybaras and playful giant otters stick with their family members to avoid being jaguar dinner.

One cheetah cub reaches out to play with the other in Nabosihio Conservancy, Kenya. (Gina Poole)

Here kitty, kitty. Veteran wildlife filmmaker Bob Poole sets out on a madcap adventure following a formidable cheetah mother who is determined to keep her cubs alive. Along the way, watch him negotiate the risks and realities of filming in the African wilderness while trying to keep up with the fastest animal on four legs. This firsthand account of a cheetah chase will have you rooting for the cats and the filmmaker.

Machli’s missing canines are evidence of her age.   “The World’s Most Famous Tiger” is in Ranthambhore National Park, Rajasthan, India. (Aditya Singh)

The World’s Most Famous Tiger

Known as “Queen Machli,” “Lady of the Lake,” and ruler of her territory in Western India’s Ranthambore National Park, Machli went down in history as one of the most well-known wild tigers in the world. Her name is the Hindi word for fish, a name she received due to fish-like markings on her face. The legendary tigress played a key role in the regeneration of the tiger population in Ranthambore and Sariska National Parks. Discover the incredible stories behind Machli’s rise to power and legacy.

Moja and his mother are outcasts from lion pride society in “Lion Kingdom.” (Kiri Cashell)

Three lion prides battle each other for territory, food and power along the Mwagusi River in Tanzania. Destiny conspires to bring the prides together, leaving a bold lioness fatally wounded and devoured by hyenas. A teenage son is excommunicated and unlikely to survive. This is the story of family, death and revenge. This is war.

Join us as we head back to South Africa and Kenya to revisit the excitement of Safari LIVE for a special two-hour broadcast during Big Cat Week! Get up close and personal with Africa’s most incredible animals. You’ll see herds of elephants, thousands of wildebeest, prides of lions, cheetahs, leopards, hyenas, among many others. Chat with our guides in real time using #safarilive.

The oldest sub-adult male of the Marsh Pride needs to watch carefully where he treads in his area of Botswana.(Natural History Film Unit)

A vicious drought gripping the kingdom forces the Marsh Pride’s aging king, Sekekama, to lead his family into hostile territory on a mission to save them. His great gamble sends him into a bloody contest against rivals old and new. But his control over one treacherous son will determine Sekekama’s hold on power, and the future of his own legacy.