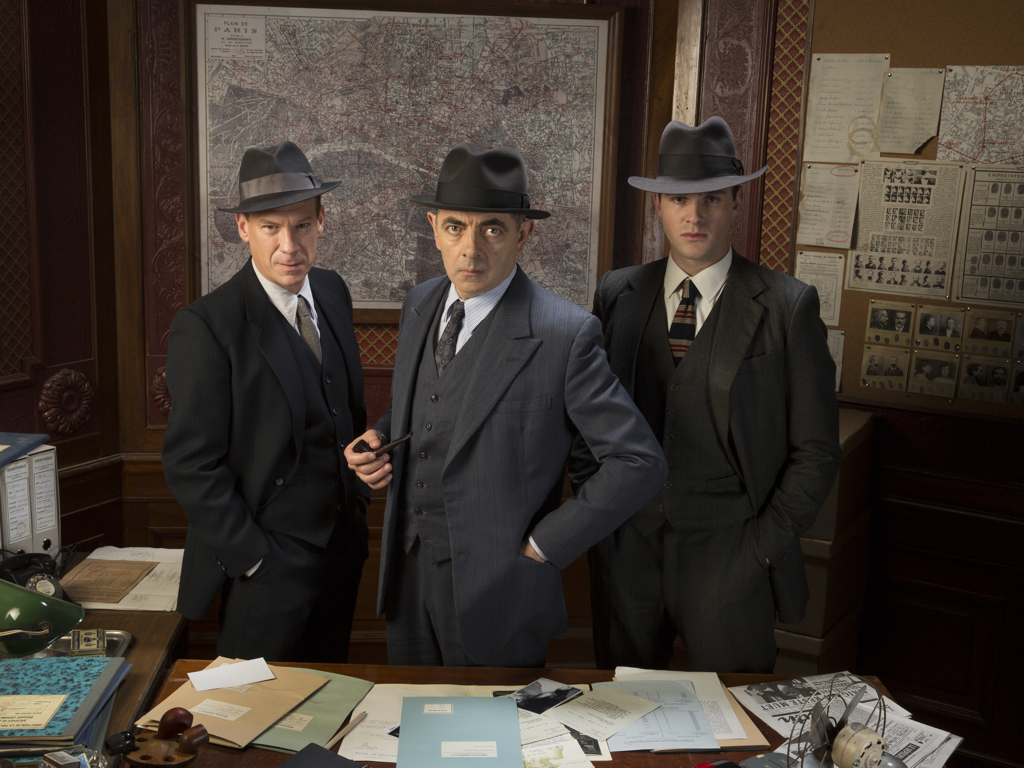 Shaun Dingwall (from left), Rowan Atkinson and Leo Staar in the new “Maigret” on BritBox. (Handout)

The subscription streaming service from BBC Worldwide and ITV looks back at some of Atkinson’s most popular roles. The service already streams “Blackadder,” and in February adds “Not the Nine O’Clock News” and “Canned Laughter.”

Atkinson gets serious on Feb. 28 in “Maigret,” a new series based on author Georges Simenon’s iconic, pipe-smoking policeman who has become one of this century’s classic fictional sleuths.

BritBox also recognizes Valentine’s Day with its “7 Ways to Love Celebration,” a week’s worth of British romances culminating in the exclusive U.S. premiere of “Against the Law,” starring Daniel Mays, Mark Gatiss and Richard Gadd. Read more below.

Before his first dramatic turn as Maigret, Rowan Atkinson was known best for his comedic talents on series like “Mr. Bean” and “Blackadder.” Now BritBox brings back two of his other top hits in exclusive U.S. premieres.

The sweep and scale of the Russian Revolution acts as the backdrop for the intense and ultimately heart-breaking love story of Doctor Yury Zhivago, the physician and poet who wrestles with the anguish of being torn between the love of two women, Tonya and Lara. This version stars Sam Neill, Keira Knightley and Hans Matheson in a script by acclaimed dramatist Andrew Davies. (BritBox premiere)

Russell T Davies’ radical adaptation of the classic Shakespeare love story caused controversy when it aired on the BBC. Now BritBox audiences can check it out for themselves. Comedian Matt Lucas plays Bottom in this modern retelling of love in the tyrannical court of Athens. Maxine Peake and Eleanor Matsuura co-star. (exclusive U.S. premiere)

Once the crowning glory of an Indian temple god, the Moonstone diamond is said to bring disaster to all who possess it. This BBC adaptation of the Wilkie Collins detective novel delves into the lengths people will go to for love and diamonds. Joshua Silver and John Thomson star. (BritBox premiere)

Hugh Bonnevile, Alex Kingston and Gemma Arterton star In this present day adaptation of the classic Jane Austen love story “Pride & Prejudice.” The plot centers on Amanda, a woman from modern London, who enters the plot of the novel through a portal in her bathroom and finds herself joining the Bennet family and disastrously changing the course of events. (BritBox premiere)

Christopher and his Kind

A vibrant and outrageously fun tale of love and life set in the hidden, decadent world of bohemian London in the 1890s. This BBC adaptation of what some called risque lesbian novels caused controversy when first on UK screens. Featuring Benedict Cumberbatch in one of his earliest role, the ensemble also includes Keeley Haws and Rachael Stirling. (BritBox premiere)

A powerful drama based on the true story of Peter Wildeblood, a thoughtful and private gay journalist whose lover, under pressure from the authorities, turned Queen’s evidence against him in one of the most explosive court cases of the 1950s—the infamous Montagu Trial. Daniel Mays, Mark Gatiss and newcomer Richard Gadd headline. (exclusive U.S. premiere)

Based on a true story that shocked a nation, this powerful four-part factual drama, from BAFTA winning writer and executive producer Jeff Pope centers on the devastating impact on a city of an innocent child’s murder amid a wave of gang violence. Stephen Graham stars. (exclusive U.S. premiere)

This new incarnation of the classic crime novels stars Rowan Atkinson, in his first dramatic role, as Chief Inspector Maigret as he looks to catch a serial killer stalking women in Montmarte. (Season 1, exclusive U.S. premiere)

Before Rowan Atkinson, award winning actor Michael Gambon played the famed detective offering a superbly understated performance as the sardonic but compassionate Commissaire who, with his unique brand of cool appraisal, never fails to pierce straight to the heart of the crime. (Seasons 1-2, BritBox premiere)