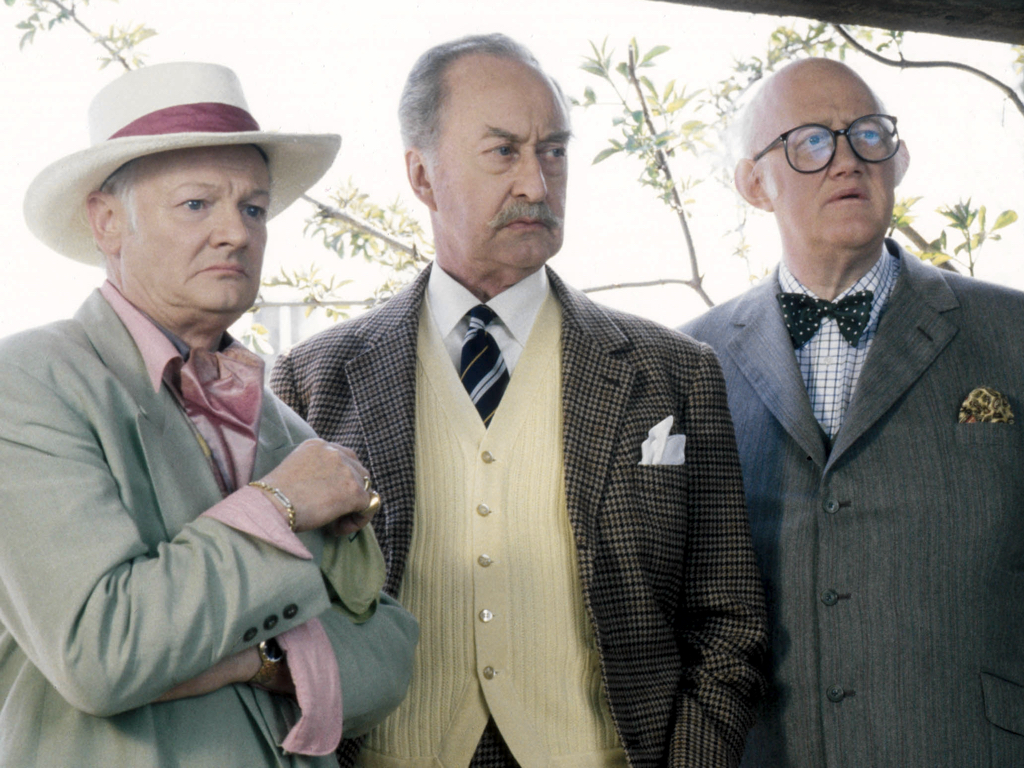 John Inman, Frank Thornton and Nicholas Smith of “Are You Being Served? Again!”

U.S. viewers will see Cold Feet 2017 and the new season of Strictly Come Dancing within a day or so of their UK broadcasts. They’re both part of the BritBox September premieres schedule.

While the dancing competition and the romantic comedy are big highlights of the September schedule, I’m more excited to see “Are You Being Served? Again!” It’s the 1992 spinoff to the hilarious 1972-85 comedy “Are You Being Served?” that followed staff members on one retail floor of Grace Brothers department store.

Now retired, the former Grace Brothers employees take over a country hotel. I can’t wait to check it out.

You’ll find the full schedule for September below.

Colin Firth guest stars in “Master of the Moor,” an episode of “The Ruth Rendell Mysteries.”

The Ruth Rendell Mysteries: The Next Chapters

From cold, rock-strewn moors to comfortable suburban estates, award-winning writer Ruth Rendell explores the dark fissures between friends and family members that motivate murder. The international best-selling author and a raft of stars ensure intrigue and suspense at every turn in these self-contained stories. Guest stars include Colin Firth and Idris Elba.

This warm and sensitive look at the personalities and rituals involved in death and funerals business features everything from the traditional Christian funeral to humanist woodland burials. The series gives a remarkable insight into the many ways we deal with the final goodbye.

Comedy follows the intertwined relationships of six Manchester-based friends who, despite now being 50-something, prove that you can grow older but no wiser. James Nesbitt leads an ensemble including John Thomson, Fay Ripley, Robert Bathurst and Hermione Norris. Siobhan Finneran also joins the cast. (Episodes will air within 24 hours after initial UK debut.)

John Inman (clockwise from center), Nicholas Smith, Wendy Richard, Mollie Sugden and Frank Thornton of “Are You Being Served? Again!”

Are You Being Served? Again!

John Inman and Mollie Sugden return in this spinoff off of “Are You Being Served?” The retired staff of Grace Brothers discover their pensions are invested in a country hotel. Gamely, they set about milking cows, chopping wood and laying tables, tripping over double entendres by the cartload.

Prunella Scales stars as Queen Victoria in “Looking for Victoria.”

Follow actress Prunella Scales on a journey to discover the truth about the monarch she plays in a one-woman show: “An Evening with Queen Victoria.” Scales ventures inside some of the most famous royal palaces in Britain to meets descendants, historians, curators and writers, who shed light on the story of Victoria who reigned from 1837 to her death in 1901.

Based on the novel of Winston Graham, this TV movie follows the highly acclaimed 1970s UK series, taking up the story 10 years later. The great romantic saga is set against the wild picturesque coastline of Cornwall, southwest England. While Ross Poldark is at war with France, his wife and son (Ioan Gruffudd), fight for the survival of their family mine.

The Doctor (Patrick Troughton) in “Doctor Who: Power of the Daleks.”

Doctor Who: Power of the Daleks

One of the most celebrated “Doctor Who” stories was thought to be lost forever until a team of animators helped to bring it back to life. Featuring the very first episode of Patrick Troughton after the regeneration, the Doctor and companions battle with the Daleks on the planet Vulcan.

Before “Dancing with the Stars” hit the States, “Strictly Come Dancing” became the original reality giant. The long-running series will make its U.S. SOVD debut as a new group of celebrities, including musician Alexandra Burke, actress Gemma Atkinson and two-time Paralympic champion Jonnie Peacock, join their professional dance partners to battle it out every week. (Episodes will debut a few days after initial UK broadcast.)