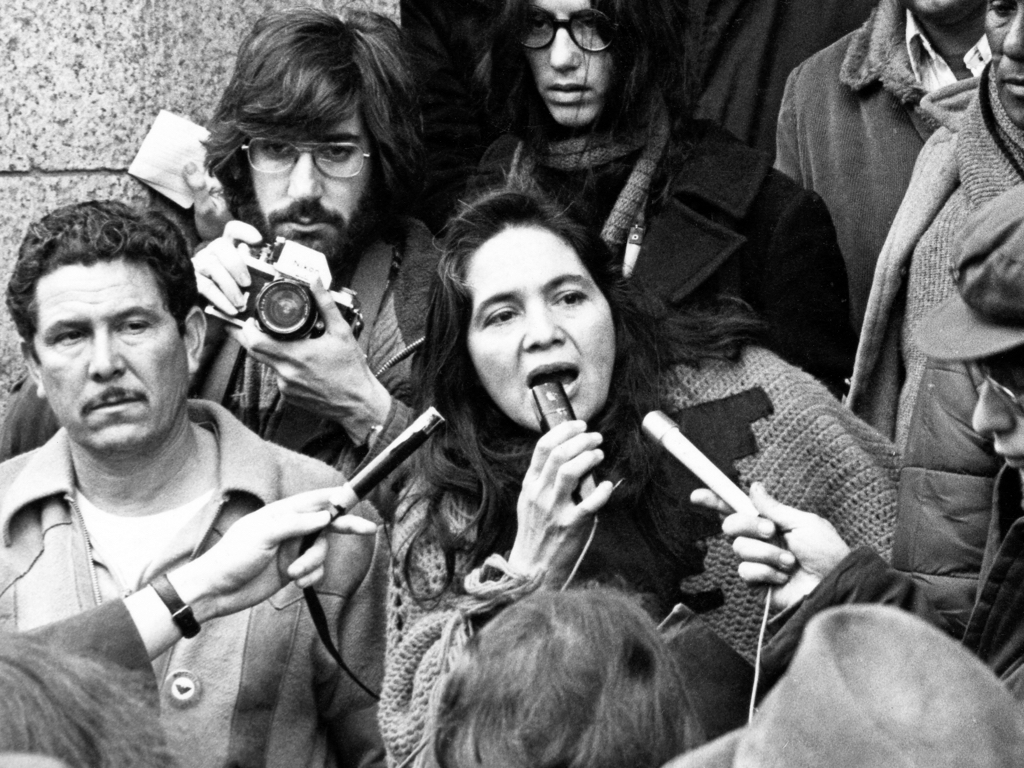 Huerta often has been overlooked as an equal partner of activist Cesar Chavez and with him a cofounder of the United Farm Workers of America.

“I believe growing up in the ’50s and the ’60s, that I think everybody just assumed that men always had to take the leading role,” Huerta told reporters at the recent TV Critics Association winter tour. “And I remember when we started the union, Cesar said to me, ‘Well, you know, one of us has to be the spokesperson. Is it OK if it’s me?’

Bratt’s film tries to correct that inaccuracy in history while exploring Huerta’s life-long commitment to equality in America. Now 87 years old and the mother of 11, Heurta continues that fight.

See the March-May schedule below.

Dolores Huerta is among the most important, yet least-known, activists in American history. An equal partner in co-founding the first farmworkers union with Cesar Chavez, her enormous contributions have gone largely unrecognized. Dolores tirelessly led the fight for racial and labor justice alongside Chavez, becoming one of the most defiant feminists of the 20th century. With intimate and unprecedented access to this intensely private mother of 11, the film by Peter Bratt reveals the raw, personal stakes involved in committing one’s life to social change.

The film is a rap-punk rock doc wrapped around a Romeo and Juliet romance. Till Schauder and Sara Nodjoumi tell the story of Iranian musician Shahin Najafi, who is forced into hiding after hardline clerics issue a fatwa for his death. Those clerics were incensed by his rap song that focuses on the oppression of women and human rights abuses. Shahin risks his life every time he steps on a stage. Meanwhile, he tries to establish a life with a woman whose grandfather Ayatollah Khomeini handpicked to be the first prime minister of the Islamic Republic of Iran.

The Art of the Shine

You might pass them on the sidewalk, at the mall or at the airport. They’re the shoe shiners, purveying an old school trade that seems like something out of the “Mad Men” era. It’s out of step with our fast-paced, disposable consumer culture. Yet, to many of the shoe shiners in this joyous and quirky film, shining shoes is a calling and a passion, a way to be one’s own boss and connect with other people. You’ll never look at a shoe shiner the same way again after watching this film from Stacey Tenenbaum.

Filmmaker Cullen Hoback travels to West Virginia to uncover the truth behind the massive chemical spill that left 300,000 people without drinking water. But when Hoback discovers collusion between chemical corporations and the government, the investigation spirals in a new direction and we learn the truth about what lies upstream of us all.

Laura Dunn’s film is a cinematic portrait of the changing landscapes and shifting values of rural America in an era of industrial agriculture, as seen through the mind’s eye of writer, farmer, and activist Wendell Berry. Through his poetic and prescient words and the testimonies of his family and neighbors—all deeply affected by the industrial and economic changes to their agrarian way of life—we see the changing landscapes of rural America and the redemptive beauty in taking the unworn path. Often called “a prophet for rural America,” Berry has long been a voice for communities frequently overlooked by the media.

In January 2016, armed protestors in Oregon occupied the Malheur National Wildlife Refuge. They hoped to call attention to what they felt was an intrusion by the federal government into their right to make a living. In a larger sense, the “patriot community” introduced itself as disgruntled American citizens with grounds for airing their grievances against a federal government that didn’t have their best interests at heart. The federal government begged to differ. David Byars’ film is an unbiased, detailed account of the impasse, displaying unprecedented access to the protagonists. It culminates in the arrest and acquittal of occupation leaders Ammon and Ryan Bundy, and left another man dead.

ACORN and the Firestorm

For 40 years, the community-organizing group ACORN sought to empower poor and marginalized communities. Its critics believed ACORN exemplified everything wrong with progressive ideals. In 2008, these competing perceptions exploded on the national stage as Barack Obama was running for president. Fueled by a YouTube video made by amateur undercover journalists, ACORN came under attack. The film, from Reuben Atlas and Sam Pollard, goes beyond the 24-hour news cycle and cuts to the heart of the political divide this event represented.

A group of exonerated men with decades in prison served between them started a new detective agency in Dallas. A realization struck Chris Scott as he sat in a support group meeting for men who served years in prison for crimes they didn’t commit. He and his friends had firsthand knowledge of how wrongful convictions happen. Together, they could start a detective agency to look for innocent people still incarcerated. Calling themselves the “Freedom Fighters,” they hope to free other wrongfully accused and convicted people. Jamie Meltzer created this film coming to “Independent Lens.”