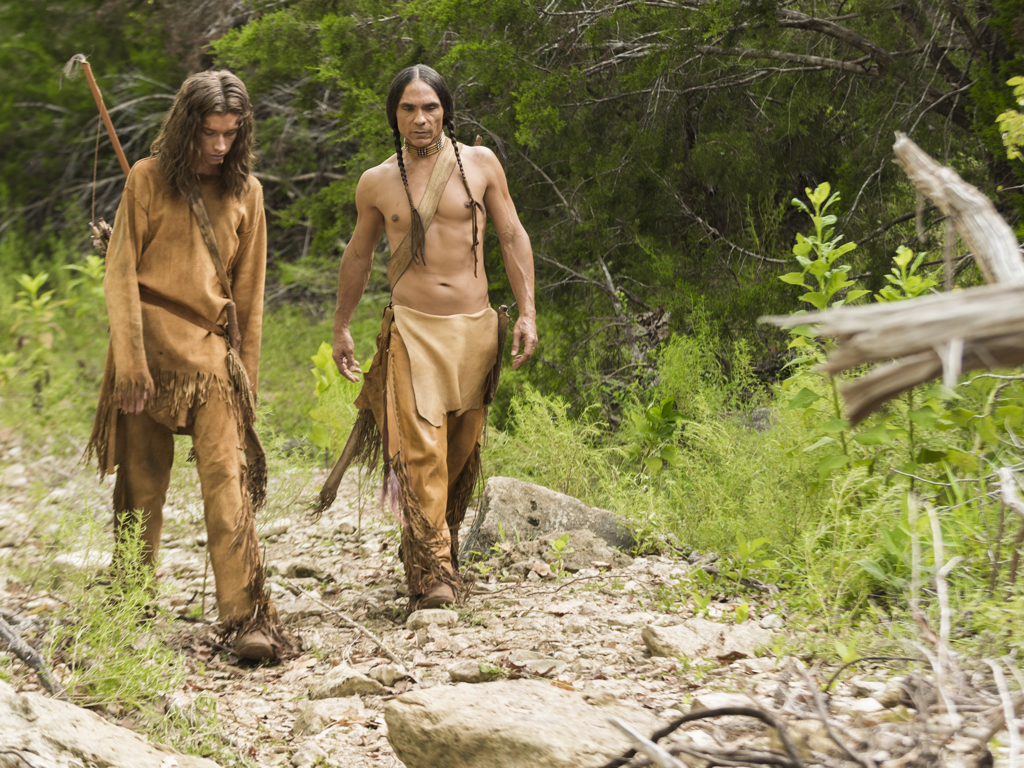 On the heels of renewing The Son, AMC airs a brand new episode of its freshman Western this Saturday. Find an exclusive sneak peek below.

“The Son” follows the life of Eli McCullough, played by Pierce Brosnan. Eli was kidnapped by Comanches as a child but becomes the patriarch of a powerful Texas ranching and oil family.

Based on Philipp Meyer’s novel, “The Son” spans three generations and 150 years of the McCullough family. The action flashes forward and back between Eli’s years (Jacob Lofland) living with the Comanches and his life as an adult in the 1900s.

In the seventh episode, “Marriage Bond,” Young Eli navigates Comanche tribal politics in 1849. Meanwhile in 1915, a crisis forces Eli’s eldest son Pete (Henry Garrett), and his wife, Sally (Jess Weixler), into a decision that will change the family forever.

In this exclusive scene from the episode, Comanche war chief Toshaway (Zahn McClarnon) offers Eli advice on how to win the heart of a woman. Eli’s interest in Prairie Flower (Elizabeth Frances) will lead to trouble within the tribe, particularly from another suitor.

On Friday, AMC announced that the series will return in 2018 with 10 new episodes. According to network, “The Son” is averaging 2.3 million viewers each week. In the current television season, “The Son” is the top original program on cable on Saturday nights and No. 3 in all of television.

“I am over the moon happy to be back in the saddle as Colonel Eli McCullough for Season 2 of ‘The Son’ and to stand shoulder-to-shoulder alongside our incredible cast of actors, writers, directors and our amazing crew in the heart of Austin, Texas,” Brosnan said in an AMC press release. “And above all else to our ever-growing fan base, I extend my heartfelt thanks for your support.”

More about The Son

“The Son” is an epic family saga spanning three generations and 150 years of the McCullough family. The series traces the transformation of Eli McCullough (Pierce Brosnan), the charismatic family patriarch, from good-natured innocent to calculating killer. He loses everything on the wild frontier, setting him on the path to building a ranching-and-oil dynasty of unsurpassed wealth and privilege.

Eli’s eldest son Pete (Henry Garrett), has grown up in his father’s shadow and struggles to make him proud while forging his own identity. Pete’s strong-willed daughter, Jeannie (Sydney Lucas) idolizes her grandfather. Despite being raised in a male-dominated world, she rejects her fate of existing solely to marry and bear children. Eli’s ruthlessness pits him against his wealthy Spanish neighbor, Pedro Garcia (Carlos Bardem). His quest for power triggers consequences that span generations.

Shared through a series of flashbacks, “The Son” pulls viewers into the world of young Eli McCullough (Jacob Lofland) and his father figure, Comanche war chief, Toshaway (Zahn McClarnon) and deftly explores the McCullough’s rise to become one the most powerful family dynasties in Texas.