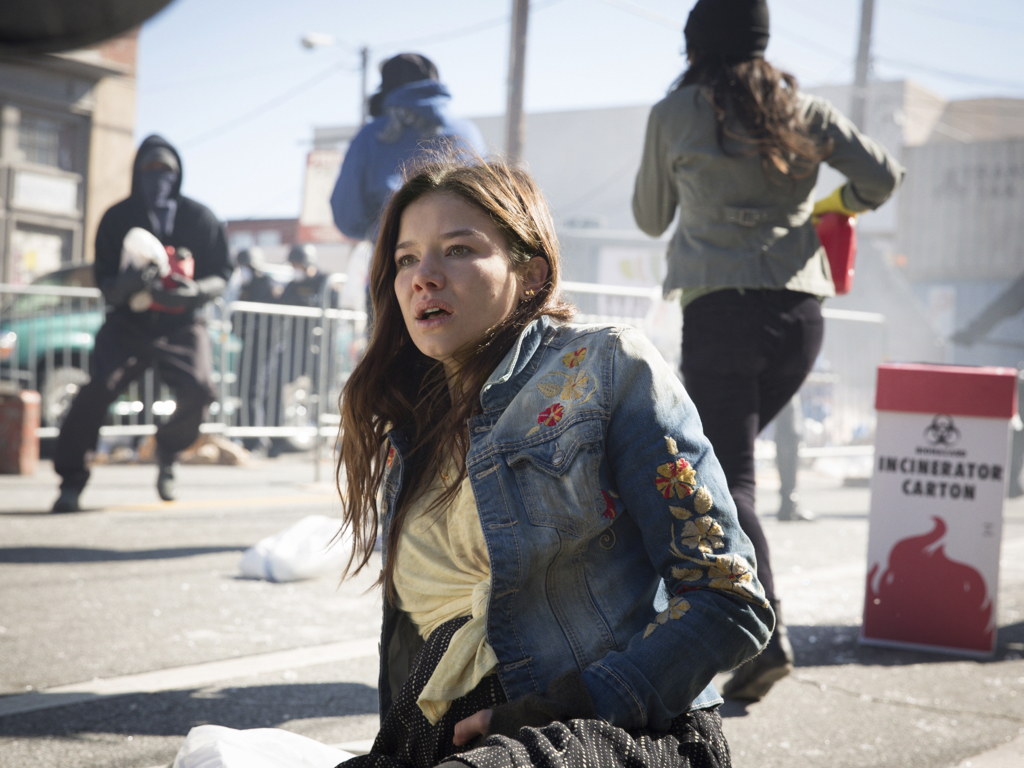 Get those barf bags ready, dear viewers, because a plague of gag-inducing bodily fluids is spewing your way in The CW’s new viral outbreak thriller Containment.

The apocalyptic 13-parter was adapted from the 2014 Belgian series “Cordon” by Julie Plec (“The Vampire Diaries”). It covers familiar territory for viewers who have seen the films “Contagion” or “Outbreak” and even has some of the same DNA as “The Walking Dead”—without the zombies.

The pilot, airing at 9/8c April 19 and directed by David Nutter (“Game of Thrones”), quickly establishes a suspenseful pace and a modicum of realism. Zombies aren’t real; SARS, West Nile virus and bioweapons such as anthrax are.

The horror of “Containment” is a hemorrhagic variant of avian flu. The fictional virus sends 100 percent of its victims in Atlanta to painful, bloody deaths.

As if that’s not enough to panic a populace, the Centers for Disease Control and the Atlanta police enact a cordon sanitaire—or no-go zone—in the section of the city that has been hit by the virus. Practically overnight walls and fences are erected around this area. In order to control the spread of the virus, no one is allowed in or out of the area.

The government fears this was a biowar attack by Syria, so it sends a police officer in the zone, Jake Riley (Chris Wood), to pick up the No. 1 suspect. Bloody coughing ensues, but Jake gets his man to a hospital where the first victim died. Soon Jake is shoveling more victims’ bodies into an oven at the behest of Victor Cannerts (George Young), who seems to be the only doctor at the hospital working to stop the virus.

“The fact that I’m here should have you worried,” she tells him. “I don’t get called unless things get bad.”

And bad they are. The cordon has separated family members, friends and lovers. Despite Rex worrying about his girlfriend Jana (Christina Marie Moses), who is inside, he has to stop people from breaking through the barriers by any means necessary.

It doesn’t take long before Rex is butting heads with journalist Leo Green (Trevor St. John) as well as Sabine. Leo launches a blog with reporting from both sides of the cordon, exposing police atrocities, providing theories about the outbreak, and leaking secret routes in or out of the cordon.

Rex has to stop Leo, even if her wants to take one of the routes to get to Jana. Gyasi delivers the best performance in the series, showing great depth as Rex enforces the new rules despite his own doubts about them.

Things remain pretty ugly on both sides of the cordon throughout the episodes, which is all fairly unoriginal. Shop owners inside raise prices and gangs begin looting. Riots break out on both sides. And the slow, agonizing deaths continue.

Those “been there, seen that” similarities will stop some viewers like a case of Ebola. But despite its flaws—and the buckets of fluids used—I found “Containment” to be the TV equivalent of a car wreck. It’s frightening, but you can’t look away.

Containment: Find more at The CW