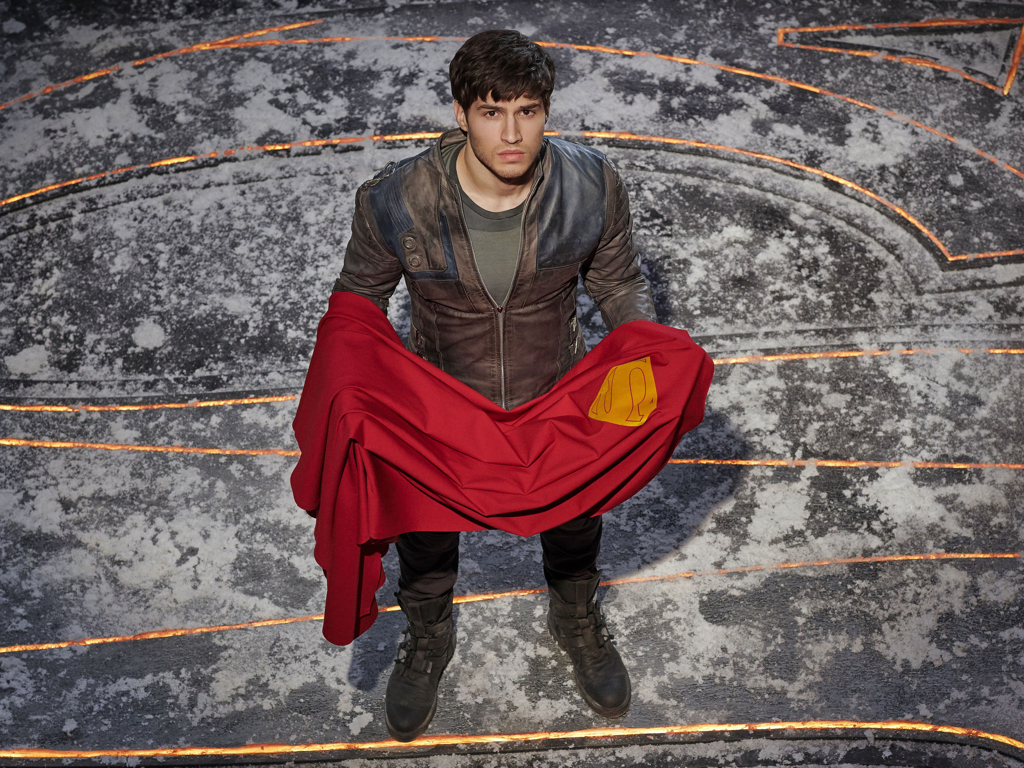 It doesn’t take much for Cameron Cuffe took evoke a certain superhero’s alter ego. All the Krypton star needs to do is don a pair of dark, thick-framed eyeglasses.

“No, no—it was not intentional,” a bespectacled Cuffe said in January after a presentation at the TV Critics Association winter tour in Pasadena. They were his real eyeglasses, he insisted.

The British actor doesn’t need to do a Clark Kent impersonation anyway. He’s already starring as Seg-El, the grandfather of Kal-El, aka Superman, in the Syfy drama “Krypton,” premiering March 21.

Created by David S. Goyer, who is no stranger to either the Marvel of DC comic book universes, “Krypton” tells Seg-El’s story. Set 200 years before Superman was born, it portrays a Krypton and House El in trouble.

A despotic, untrustworthy politician whose daughter serves as one of his advisers (that sound familiar?), runs the planet’s most populous city, Kandor. He supports Krypton’s caste system, which keeps the poor in squalor on the ground while the rich enjoy literally elevated lives in a high-rise paradise.

The cult of Rao, whose representative wears a golden, six-faced mask, has outlawed other religions. He preaches against science and the possibility of life on other planets.

When we first met Cuffe’s Seg, he’s an angry young man who has seen his family stripped of its rank and forced to live among the rankless poor. He’s more prone to scams and bar brawls than saving the world like his grandson does centuries and light years away from Krypton.

“That [Superman] legacy feels very far away from him when we first meet him in the show,” Cuffe said on stage in Pasadena. “The entire show is him growing as a person to fill that [’S’] symbol and the symbol growing to be what it becomes—that great symbol of hope throughout the multiverse.”

Fittingly, Cuffe knew exactly what the “S” stood for long before “Krypton” came his way. The 20-something actor has been a superhero fan and comic book reader since he was kid. He’s even dressed as Superman for Halloween.

“My Saturday morning cartoon was the animated ‘Superman’ and ‘Batman’ series,” he said. “I grew up like a lot of kids in my generation having a cursory knowledge of who these characters are.”

He said reading the Geoff Johns-penned “Teen Titans” comics (2003-11) made him realize the depth of storytelling in the DC Universe and made him a fan of Superboy/Superman. Johns is now president of DC Entertainment and a producer of “Krypton.”

“For me as a kid who spent a lot of time in my imagination, it was so inspiring to see someone who is so immensely powerful who stood for hope and justice and, no matter what, always believed in you and in the good in people,” Cuffe said. “That was something I always carried forward. Whenever I have a difficult decision to make, I still always think, ‘What would Superman do?’ ”

Cuffe, with his dark hair and buff bod, could pull off playing the Man of Steel. But his road from London theater and indie films to the DC Universe took some Su-perseverance. Cuffe was the last actor to be cast among the leading roles after a long audition process.

“I will say it may not be hard to write Superman, but it’s hard to cast somebody related to Superman,” Goyer said at TCA. “Because even though he’s his grandfather, [Seg-El] still has to embody all of these characteristics. There’s an ineffable quality [that means] you’re sort of casting Superman.”

Cuffe first sent in an audition tape and eventually met with the British casting director and Colm McCarthy, who would go on to direct the pilot. When he was later told he didn’t land the role, he just went about finding other work.

He filmed “The Halcyon” in Britain and an episode of ABC’s now cancelled “Time After Time.”

“But [‘Krypton’] never really went away,” Cuffe said. “It kept cropping back up.”

The day before wrapping “Time After Time,” his agent told him he had a screen test for “Krypton” in Los Angeles two days later.

Cuffe met Goyer at the screen test and impressed the creator. “When he came in the room, we were like, ‘He’s got it.’” Goyer said.

The pressure of the role didn’t end after the screen test, but Cuffe said it’s good to feel a bit of pressure while filming outside of Belfast.

“It’s just a joy. Yes, there’s pressure, but that’s something that keeps of grounded and keeps you humble and makes you remember how lucky you are to be working on something like this,” he said. “As a fan, I had an inherent understanding of what this world is and what it means to everyone around the world.”

Despite being a fan, Cuffe said, he had to approach the role with his “actor hat” on—as he would any other part. He studied the scripts and had many conversations with Goyer about his vision for Seg-El and Welsh about the world of Krypton. He researched other sources, too, seeking out movies with a similar tone. And he read books—and comic books he hadn’t read—about Superman’s origins.

He also did months of physical training, he said, adding 15 pounds of muscle through weightlifting. According to Men’s Health, he followed that heavy lifting period with months of mixed martial arts and boxing.

Despite the long road to “Krypton,” Cuffe said he feels privileged to be working on the show. He doesn’t worry that casting directors now will see him only as “that guy from the Superman universe.”

“If that is the case, it’s an honor and a privilege,” he said. “I love this character. I love this world. So, if I am Mr. DC or Mr. Superman for the rest of my career, then that ain’t bad.”