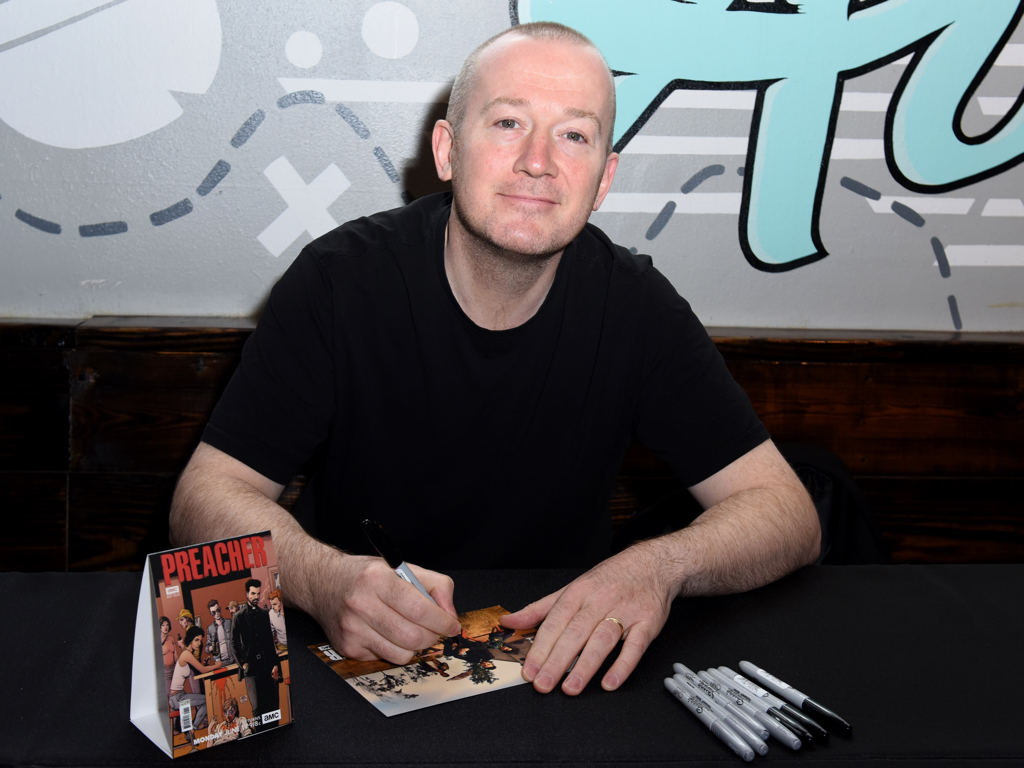 Garth Ennis created the graphic novel "Preacher" upon which the AMC TV series is based. (AMC)

When Garth Ennis started writing Preacher for Vertigo Comics in the early 1990s, he didn’t think about making it a TV series. Once he met Seth Rogen and Evan Goldberg, he happily handed his creation over for them to adapt into the AMC drama.

Ennis and I spoke last year on the eve of the series premiere of “Preacher.” With the show’s first season now streaming on Hulu prior to the June 25 Season 2 premiere, I dug up our “lost interview.”

In it, Ennis talks about the adaptation process, working with the producers and what he thinks about the cast members bringing his characters to life to the small screen.

How does it feel to see your vision and your work put into a different medium?

Well, it’s great. It’s been a delight really from the beginning. I mean it’s been a long old road, but this is a terrific way for it to finally happen.

What was it about Seth and Evan that made you trust they would do you right?

In a broader sense, they really represent a whole slew of creative people I’ve seen on this and other projects over the past few years who were in perhaps a more junior position … and they were passionate about these projects but they just didn’t have the muscle to do it. Still, they kept at it and when they actually did have a bit of weight to throw around, as it were, they remembered what it was they’d always wanted to do.

More specifically, I first met the two of them at the original pitch meeting about two years ago and what impressed me was when they sat down to lay out their vision, and Seth actually talked about what he wanted to do with “Preacher”—what they thought should be brought to the fore, what they thought they should be deemphasized, how in other words you took the comic and put it on the screen. It was extremely impressive hearing this calm, clearly expressed vision. All I said at the end was, “I think you’re on the right track, but just keep the spirit.” That. I think. is exactly what they’ve done.

Do you hold your creations as precious? How do you deal with the adaptors’ desire to change things to make it work for TV?

Well, my priority would be that it would work. Once, as I say, the spirit has been identified and maintained, I don’t mind if they change the sequence of events a bit. They introduce characters earlier, they deemphasize certain things, bring others into the fore. I’m not as concerned about that.

“Preacher” needs change anyway because, and this comes down to the difference between comics and TV, the pacing of the comic is almost alien to TV. [Executive producer and showrunner] Sam Catlin says it hits the ground running at about a hundred miles an hour, then rapidly accelerates. If you tried to put that on the screen you’d simply overload every episode. There’d be a new grotesque character, a new over-the-top scene every couple of minutes and the thing simply wouldn’t be able to sustain itself. You’d also run out of material inside about a season-and-a-half. So no, my main concern with this is if “Preacher” is going to be on the screen let’s make it work. And if we have to knock it about a little bit to do so then that’s fine by me.

That’s very sporting of you!

I’ll tell you where I would draw the line would be if perhaps one of my war stories was being adapted. That’s my current passion really is the military fiction that I write. If someone wanted to do something that was historically impossible or extremely inaccurate then I would draw the line there.

And are you in a position now pretty much that you can dictate those terms?

Well, in the more general sense I can say yes or no to projects [as in] whether or not they get off the ground. On this they’ve been very good about giving me access from outline to script to dailies to actual cuts. I’ve given notes and they’ve been addressed, but the more I see the more confident I get. I feel I should just back off and let Sam Catlin and his team and the cast and crew get on with it. I’ve really enjoyed seeing this whole thing unfold and the work they’ve done has given me such confidence that I’m almost looking forward to watching “Preacher” as a viewer rather than someone who’s actually involved in it.

So you haven’t seen every episode then?

I’ve seen nine out of 10 and I’ve read the script for the last one and I’ve probably seen all the dailies now as well, so I know roughly what it’s going to look like.

That would be I think The Saint of Killers.  Seeing that come to life, seeing the direct roots of the Old West, the actual Western at the heart of “Preacher” come to life has been a real treat.

What characters have changed the most from your vision but they still work?

Tulip is obviously more of a live wire. In the book she was a far more reasonable polite well-mannered character who could suddenly accelerate into extreme violence and its delivery in many forms at the drop of a hat. I think Ruth Negga’s performance is perhaps a bit more believable and realistic, where her softer emotional core is buried a good deal deeper.

You weren’t involved in any of the casting, were you?

I wasn’t. Although I think they’ve made great choices. It was seeing Dominic [Cooper] in costume for the first time that really made me think, “My God, this is real.”

TV can’t pull off all the gore and all the crazy stuff that you put in the comics. Did you help them with ideas like for overcoming those limits that they might have had?

I pretty much left it up to them. Partly that’s just my essential belief in leaving things to the experts and partly it’s having already told the story once. I don’t necessarily want to get too involved in doing it again. It’s very different to the kind of material I write today.

Will you ever adapt one of your own works to screen or would you want to?

There are things I’d like to do if I was going to put the energy into getting involved in something from the ground up. Some of the war stories I’m doing, and that’s where my real passion lies, I think would work nicely on the screen. But at the same time I’d be so incredibly precious about them that I might not ever want to give up control. That’s a double-edged sword. That might not work so well. Really I’m happy simply continuing to write comics.

Has the success of Preacher the graphic novel given you the chance to be creative in other ways and do other things that you wanted to do without having to talk somebody into it?

It really did. It moved my career up several levels all at once.  People weren’t really ready for it. They hadn’t seen that kind of thing in comics before. Believe me, I didn’t know you could do that in comics either until I actually did it. It took a lot of people by surprise, made a big splash and got me where I needed to go a lot faster than I was expecting. Since then, yes, it’s been so much easier to get new things off the ground as a result.

And what are you working on now? You said your military stories…

Actually, this illustrates why I like writing comics so much. In about a year-and-a-half, I’ve been able to write about American bomber crews over Germany; Israeli tankers on the Golan Heights in ’73; German refugees trying to stay ahead of the Russian in 1945; Irish soldiers in the British Army; American escort pilots over Tokyo. The most recent one was British gunboat operations in the English Channel.

Now just imagine trying to scare up a movie budget or a TV budget for any one of those and imagine the amount of time you’d have to devote to them. And then imagine—just ask whether or not you’d actually be able to see the creative vision through without major interference from studios. You can probably see why I continue to like writing comics.

What I write goes on the page. The only collaborator really is the artist and essentially I call all the shots and I couldn’t be happier doing that. And when I’m writing historical fiction like this—and I think it’s important to be true to the original events—it’s not something I’m keen to let too many other people get involved with. I don’t want any other cooks getting at the broth, if you know what I mean.

Do you do a lot research for these to keep them historically accurate?

I do, although much of it is really inspired by my reading of military history—an area which I have something of a passion for. It’s more that the history inspires the stories rather than me having to go back and do the research after I’ve thought up the story.

Do you have any favorite old war movies?

Favorite war movie would be “A Bridge Too Far,” the last of the great ’70s, cast-of-thousands movies where each star came in and did his five minutes and it was cut together into this incredible epic. I think it works equally well as a war movie and as an antiwar movie because you get the epic scale, you get the tanks rolling and the airborne legions falling from the sky and then it all turns out to be folly. It’s all or nothing. It’s a military disaster and all those lives are wasted for nothing. Very impressive film and yeah, probably my favorite war movie.