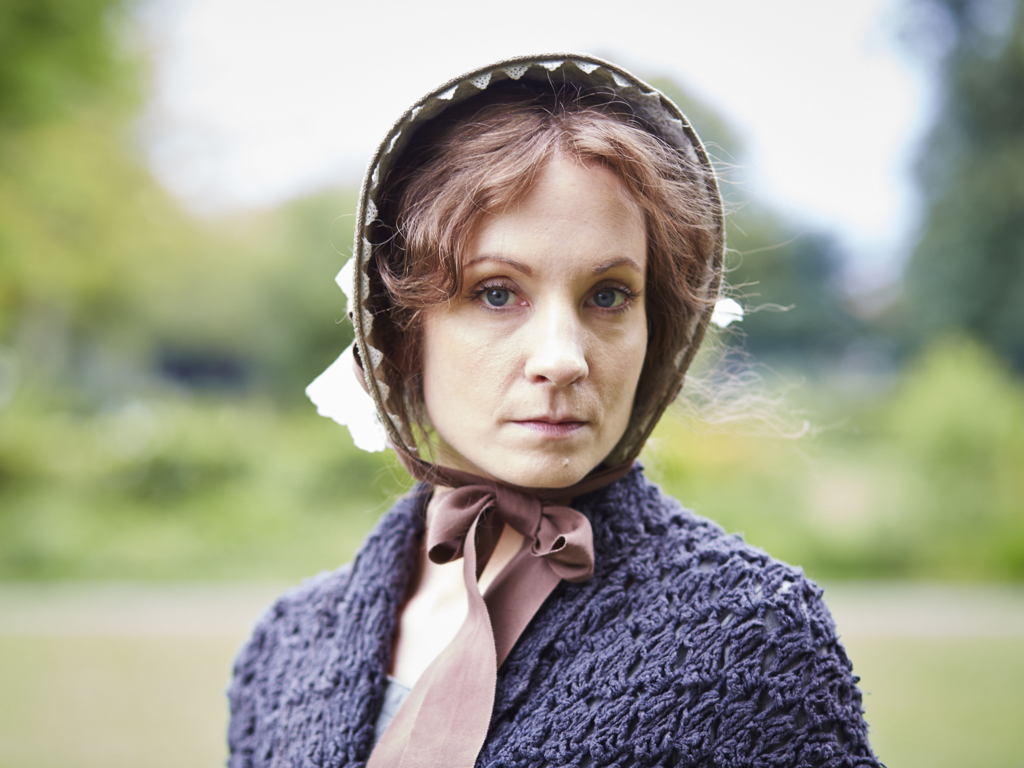 “I can’t say I like this person because I don’t. But I am fascinated by her,” Froggatt told me. “I just have to try to make sense of her for myself, and in turn, hopefully, for the audience.”

Viewers can decide for themselves when “Dark Angel” airs 9/8c May 21 as part of “Masterpiece” on PBS. Froggatt loses any trace of sweet lady’s maid Anna Bates in the film that follows about 15 years of Cotton’s life and eventual hanging in 1873.

Although only convicted for the murder of her 7-year-old stepson, she was suspected of killing between 12 and 19 others—including several of her children and stepchildren, her mother, three husbands, a lover and a friend. That’s nearly three times as many known victims as her male contemporary, Jack the Ripper.

Her chosen method of murder was spiking her victims’ tea with arsenic, a poison widely available at the time. She then cashed in modest insurance policies on many of her victims.

“Dark Angel” is Froggatt’s first role since “Downton Abbey” ended. I spoke with the Emmy nominee more than a year ago at the TV Critics Association event in Pasadena, Calif. Here is an edited transcript of our chat.

“Dark Angel” is quite a change for you from “Downton Abbey.” Did you feel like cleansing your pallet.

It was sort of an offer I couldn’t refuse, I must admit. People kept saying, “What do you want to do after playing Anna?” I jokingly kept saying, “I don’t know, maybe play a murderer or something.”

Then this script came along seven weeks before I finished shooting [“Downton”] and I just went, “Well, that’s what I’ve been saying.” I asked for it and it came. How can I say no? It was an easy decision to make in terms of what I wanted to do as an actress.

How hard was it to get into the head of this person that you obviously are not like? Unless you are. I mean, we did just meet.

[Laughs.] No, I’m not, no. Don’t worry, you’re safe. I won’t make you a cup of tea. But it was tricky. Speaking to David Wilson, a criminologist who wrote a book about her, was really helpful for me. He believes she was on the spectrum of being a sociopath or a psychopath or whatever she may have been. Learning that people on that spectrum don’t understand emotions in the same way we do helped me find my way into the character. I tried to show that lack of emotion.

Wow, the script is such a page turner. [Screenwriter] Gwyneth Hughes has done such a great job writing this woman, telling this woman’s story. I really felt for [Mary Ann]. She does all these horrible things yet for some reason I still wanted to know what happens to her. I wanted to know why she did these things. There are so many times she nearly makes the right choice but then doesn’t. I was fascinated by that psychology: what is it that’s wired in her differently that’s making her do these things?

What shocked or surprised you most about a woman who killed all her children?

Her first six children, it is believed, all passed away of natural causes. It’s also believed that she almost accidentally killed one of her own children, which sounds very strange, but it will be explained in the story.

What I found absolutely shocking about her and the time period was how widely available arsenic was. It was incredibly common for women to poison unwanted babies because there was no birth control.

People were near starvation because times were so desperate. Because so many infants died of starvation and natural causes, the government created a fund to pay for funerals of children under 5 years old.  They had to stop that practice because people were killing off their unwanted children to get the money so they could feed the rest of the family.

I had to forget about my world of opportunity and get my head into that space. I imagined her in that place and time.

She certainly had few options in that time.

There was such a lack of opportunity for women in that period. I wondered the whole way along whether she would have made those same choices had she lived in this day and age. Would she still make those decisions or would she not have felt so forced into that dark place?

Her relationship with Jonas Armstrong’s character sort of changes her a little bit. Tell me about that.

Joe Nattrass awakens something in her that she’s never felt before. It’s exciting and she realizes for the first time there might be more to life than this misery that she’s living. In real life they had an affair, from what we can tell, for 15 years on and off. He is her lifeline. He offers her a reason to get up in the morning and she chases it. Then once she’s done that, she wants to chase that feeling again.

She wants to be more powerful, to be respected. She wants more opportunities. None of those things comes for her, so she takes it where she can get it. Because of the way she’s wired, she makes very different decisions than other people would.

What more is there to Mary Ann than “cold, calculating killer?”

She certainly becomes a cold, calculating killer. She doesn’t start out like that. The first person she murders is her first husband, who she has been married to for 11 years. She has suffered the loss of six children by that point. She’s almost driven mad with grief. Her husband gets injured and he can’t support the family. There is no Social Security or other aid back then. There was no way for her to make a living because she was married. She had children to feed and no way to feed them.

So that first time she kills, you could argue, it’s to feed her children. She simply did it out of desperation. But after killing once changes her. She loses a part of her humanity and, therefore, it’s easier for her to kill the next time. The next time she’s in a desperate situation, murder becomes a very real choice for her. And she keeps making that choice.

But that’s thing, isn’t it? It brings up the question of nature or nurture. Was she born that way or was it the series of events that led her down that path?

There are some scenes where she seems like a nice mom. But one could assume she wasn’t nice to her kids at all.

Whether she was capable of love in the same way as other are is the question. She probably wasn’t. But from all accounts, she did have a favorite child and that is who we see in that scene. By all accounts she didn’t want anything bad to happen to her. From what we can tell she wanted to keep that child alive. She certainly had feelings for her, a fondness, a love for her, but it’s not the same sort of love that you and I feel, I guess.

You have played characters who have been through very traumatic events before on TV. How was this different?

Brian [Percival] and I spent so much time meticulously planning out her emotional journey and the psychology of her, so we could make sense of it. That was invaluable because once we got on set we didn’t have time to worry about the next scene.

We filmed all the scenes in the Mobry tenement building on the same day. So in that day I had to have a breakdown, react when a baby dies, go into labor and kill a husband. I filmed all that in a day! By the end of that day I had such a headache, I can tell you.