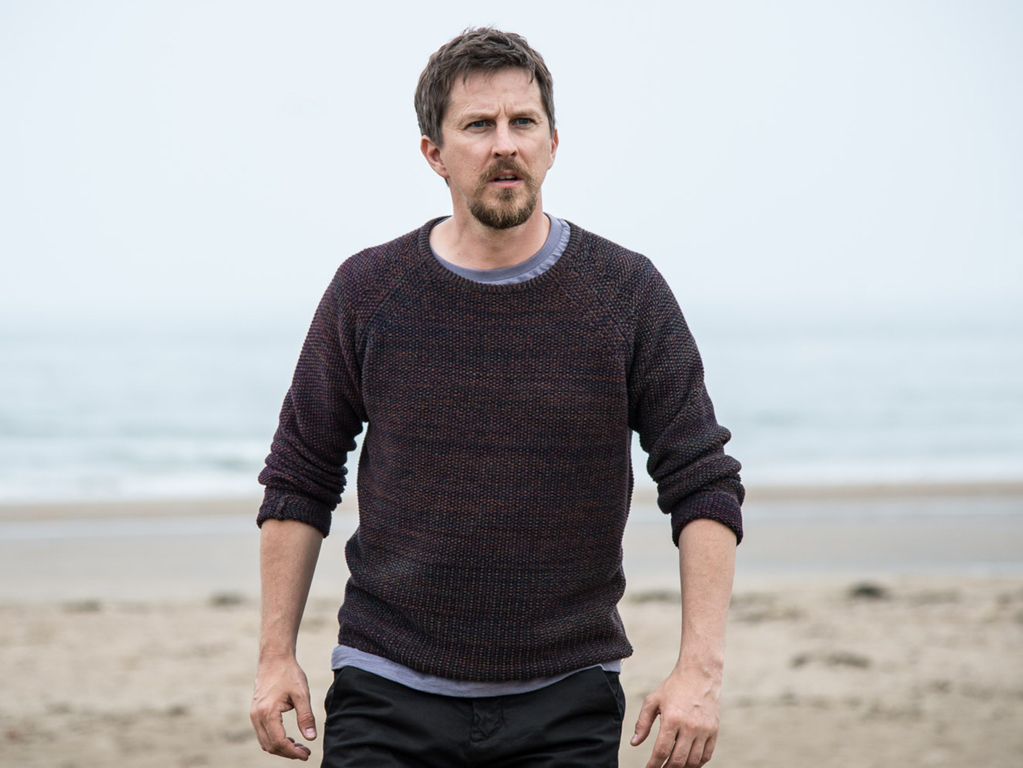 Guilty or innocent? That question hangs over David Collins in the riveting whodunnit Innocent, currently streaming on Sundance Now. But the mystery isn’t all that drew Lee Ingleby to play David.

The British actor wanted to explore how a man who had been imprisoned for seven years for the murder of his wife would react when he was suddenly freed on a technicality.

“I think to be back in society and to try to reestablish a connection with your own children that you never really knew—you missed out on a lot of the formative years—is an interesting story to me,” he said. “It’s fascinating.”

David’s children, Jack (Fionn O’Shea) and Rosie (Eloise Webb) have been living with their mother’s sister, Alice (Hermoine Morris), and her husband, Rob (Adrian Rawlins), who still believe David is guilty. The only person who really believes Jack is innocent is his brother, Philip (Daniel Ryan).

Even as a new investigation by DI Cathy Hudson (Angel Coulby) leads to other potential suspects, the question remains: Is David innocent?

I chatted with Ingleby about “Innocent” and some of his past roles.

Episode 1 of the four-episode limited series currently is streaming on Sundance Now. A new episode premieres on Thursdays.

David Collins (Lee Ingleby) speaks to reporters after being released from prison on a technicality. (Handout)

Philip Collins (Daniel Ryan) campaigned for the release of his brother, Daniel, after he was sent to prison. (Handout)

I’ve seen you in so many different projects. How do you choose?

It’s probably the answer that most people say. It really is down to the writing. I think when you read a script and you can sort of identify with a character or the character’s got something really interesting to say, I’m drawn to that. That’s what I really enjoy. I love seeing characters develop and discovering their flaws and vulnerabilities.

What was it about David that intrigued you?

Here’s a guy who’s been sentenced to life for the murder of his wife, and then he gets released on a technicality. He’s forced back into a society that doesn’t want him there really; they believe that he’s guilty. The only person that’s stood by him is his brother. … I thought this would be quite fun to play.

Was it fun? It doesn’t look fun from where I’m sitting.

Well, no. The piece itself isn’t a barrel of laughs, but the actual filming process was a nice one. We’re in a nice place. We had a nice cast and fantastic crew. It’s always a pleasure to do that when you’re working on something that’s got a lot of love and heart in it. And there was so much to this character, which is fun to dig into.

David is so angry. How are you able to get to that rage—beyond the fact that you’re an actor and it’s your job?

I think a lot of it is discovering what’s within the script and what makes it more interesting. Here’s a guy going, “No, I didn’t do it. I was set up. I am innocent.” When you sort of go against that by having flashes of violence and unreasonable behavior you make the audience think, “I don’t know who this guy is anymore.”

It’s just channeling what’s in his head. In the case of David, understanding what he deems to be injustice. The fact that his life was wrenched apart and put on hold indefinitely. Developing that backstory that he’s had to survive his prison years. He’s had to sort of toughen up. Those injustices have made him become an angry, bitter man.

He apparently learned how to fist fight in prison?

“Innocent” plays like a whodunit. In each episode some revelation makes the viewer—well, it made me—go, “Oh my God. It was this person. No, it was her.” Are we also supposed to suspect David as well?

Well, I think you hit the nail on the head. There are certain things where you go, “That doesn’t seem right. What was he doing in that place? Why did she say that?” I think it does make me believe, as it would with any case I suppose, that everyone is a suspect until you can fundamentally prove that they didn’t do it.

I think David isn’t an innocent in that respect. He does have flaws. He has made mistakes. His relationship with his wife wasn’t perfect. He’s not ruled out entirely. I think you have to exhaust all possibilities.

It’s interesting is how this piece sort of shows how people’s memories can be tainted by their own issues or misconceptions. Obviously, some of these folks outright lied to police, but some I don’t think meant to mislead anyone. It’s just their perception of people or situations colored how they remember events.

Absolutely true. There’s a scene where David admits for the first time, both to the police and also to himself, that his marriage wasn’t all moonlight and roses. It was hard and his wife found that he wasn’t challenging her anymore.

I think he felt slightly emasculated when he finally admitted that. Those rose-tinted images of going, “We were such a young couple in love—and then my world fell apart” isn’t quite the truth.

Did you get to see all the scripts before you started, or did you do it one script at a time and discover things as you filmed episodes?

I got to see the four scripts before we started filming. I need to know what the truth is, because the character does know what the truth is, or his own truth anyway. To start playing something where I’m going, “Is he as innocent as they say he is, or is there more to it than that?” I couldn’t second guess that. I need that kind of backstory. A few of us knew on the outset what the result would be.

When David first reunites with his son, that killed me. That was such a great scene. How did that go on filming day?

Thank you. I think we talked about that, me and Fionn, who plays the young boy. He’s going, “I’m obviously flesh and blood.” They had a relationship up until he was about seven years old. But a seven-year-old is very different from a 15-year-old.

Jack has been fed stories about his dad along the way. What he believes to be true about his dad, who’s been sent to prison for a very long time, may not be the truth. I think curiosity gets the best of him and he wants to make up his own mind.

We tried to play that thing where you have this ideal of what it will be like when you first meet again; you plan so many things to say. Then suddenly it goes out the window and you don’t know what to say when you’re facing each other. It was a really lovely scene to play.

One last question about “Innocent,” but it’s related to another one of your shows: How would DI Bacchus handle this case?

He would be more a bit like Beech, the original investigating officer. He’d try to cover things up, and go, “It’s not even worth investigating. Let’s just call it a day and move on.”

“Let’s go get a beer.” By the way, now that “George Gently” is done, when are we going to see the spinoff series called “DI Bacchus?”

Yeah, it’d be fun. They could solve Gently’s murder.

Yeah, absolutely. I don’t know whether it’ll happen or not. I think it’s maybe been talked about, but it’s kind of out of my hands really.

Lee Ingleby on The A Word

You currently are starring in another great series, “The A Word,” which airs on Sundance TV here. What drew you to this project?

Well, I’ve always been a big fan of Peter Bowker, the writer. I just love his work. He tackles things that are very human. In the case of “The A Word,” it’s just about a family who learns how to deal with the diagnosis of autism of the young son, and the complications that go with that. Especially the mother and father have very different views and different ideas of how they should work towards helping their son.

What’s beautiful about it, I think, is its brutal honesty at times. It’s not what you necessarily say in public or what you think, but sometimes you just have to air those thoughts. They might not be what you want to hear. That’s what I liked about it.

What has the response been to the two seasons?

It’s been really good, especially from the autistic community. Of course, with something like autism, you’re only telling one story of one family in one situation. It’s a spectrum, so no two stories are going to be alike. This is just one story. But people really do identify with it and offer their own stories as a result.

It also makes people who don’t have any experience with autism, maybe understand a little bit more about what it’s like to be a parent or a caregiver, or a brother or sister of somebody with autism.

It’s inspired you to get involved, too, hasn’t it?

It has. I contacted the National Autistic Society here in Britain, and offered to lend my services. If there was anything I could do or retweet, or anything like that, I offered. They said, “Would you like to raise awareness by becoming an ambassador?” I jumped at the chance. It’s Autism Awareness Week next week, so we did an advert, and I did a voiceover for it. Whatever I can do really. It’s only a little bit really, but yeah, it’s become a very personal cause and something that I care about.

I understand the creators want to do a new season every couple of years?

That’s the idea. I think Peter Bowker’s going to pitch a new idea of where he sees the family in two years time, and they’ll go from there. Hopefully there will still be some more, yeah.

Lee Ingleby on his career path

That’s really a family drama, and “Innocent” is sort of a whodunit, but it’s also got the family side to it. Do you have a preference or cop story or family drama?

You did “George Gently” for 10 years but because of the smaller episode order you always have been able to do more. Do you prefer that?

Oh, absolutely. It’s always nice to sort of play something different to what you did last. You’re not spending the entire year in some part of the world you don’t know. It’s always nice to jump between genres, too. If something came up, which was 10, 12, 15 episodes, then of course, if it’s good enough, if the story can hold for that long, then of course I would. It’s whatever the challenge may be.

Where else can you see Lee Ingleby?