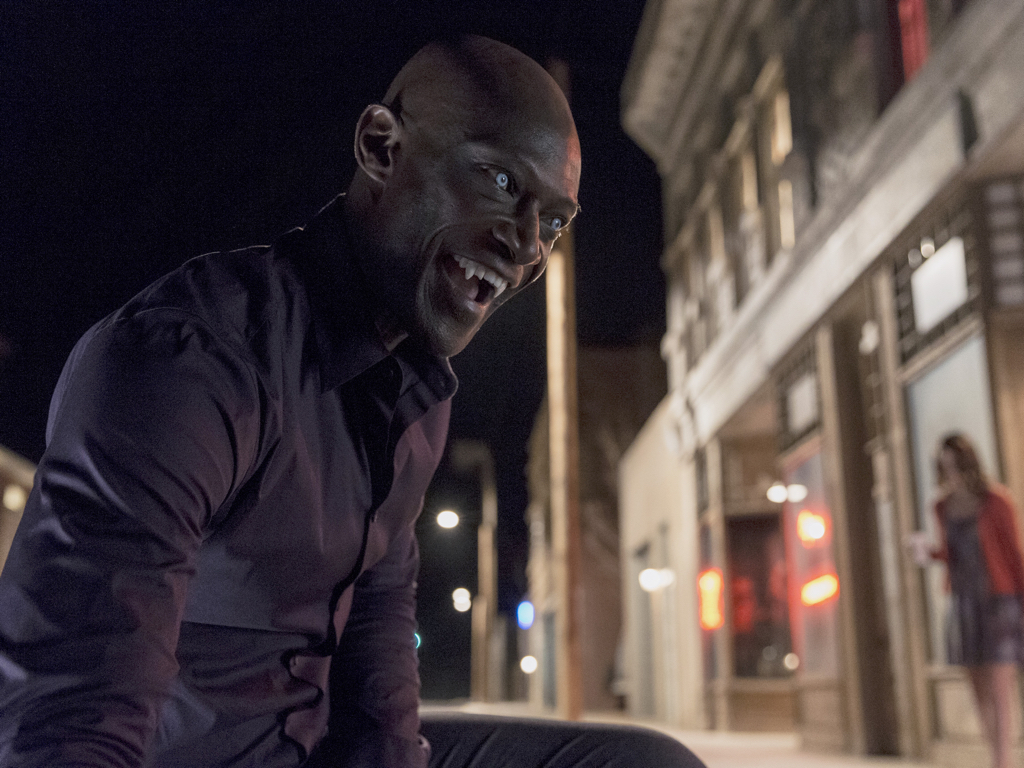 Peter Mensah won’t be revisiting his days playing a Roman gladiator for Midnight, Texas. His vampire character, at a mere 200 years old, would be more comfortable in cowboy boots and chaps than leather armor.

“Lem’s a growing vampire,” Mensah said during a January visit to the Albuquerque, New Mexico, set. “But he is getting powerful. He knows how to do a lot of things.”

Unlike many vampires, Lemuel Bridger is able to recharge by sucking energy—and not blood—from humans. But humans were not safe around Lem, Mensah said.

“That blood lust is still something that’s bubbling under the surface,” the “Spartacus” actor said. “So he remains somewhat dangerous.”

Fans will see just how dangerous Lem is in the Aug. 7 episode, titled “Lemuel, Unchained.” Through flashbacks, the writers explore how Lem became a vampire and how he changed over the centuries.

In present day, some of Lem’s old friends roll into Midnight and spark suspicion among his fellow Midnighters. Lem’s lover, the assassin Olivia Charity (Arielle Kebbel), dislikes the visitors so much she actually teams up with her least favorite new neighbor, psychic Manfred Bernardo (Francois Arnaud), to uncover their true motives.

Mensah talked with a group of writers about Lem, the joys of acting in bright blue contact lenses, and why “Midnight” is a perfect tale for our troubled times.

“Midnight, Texas,” based on books by Charlaine Harris, airs at 10/9c Mondays on NBC.

What did you know about the show before you started filming?

Coming into it all I knew was that it was from a series of books by Charlaine Harris. I knew Monica Owusu-Breen is our showrunner. I thought the world of her because a number of friends of mine have worked with her on “Agents of S.H.I.E.L.D.” and “Under the Dome.”

Niels Arden Oplev directed the pilot, and I’d always wanted to work with him since the first time I saw the original version of “Girl with the Dragon Tattoo.” So I thought, “This could be good.” And it really exceeded that expectation. I think it’s a fun ride. And it just gets intense.

Is the intensity pretty surprising for network television?

It’s a lot, but in a very approachable way. It’s quietly subversive in that it’s a group of outsiders whom you just don’t imagine being together. They’re rejected by everyone else around them. So even the satellite towns around them reject them; everybody sort of drives around Midnight instead of through it.

Our lead character basically brings the audience into Midnight, and as he experiences each of us, so does the audience. And you find every person you meet is unique in some extraordinary way. But somehow they form a very close-knit society.

That is why I think “Midnight” has something very unique. I think everyone relates to being an outsider at some point in their life. Hopefully most people are able to find someone who accepts them, too.

You filmed the pilot a while ago. Has that wait been difficult?

The time between the pilot and when we actually started shooting episodes is so typical. You know not to hold your breath after filming pilot. Go do something else, stay loose; if all the stars align, you’ll be back. That’s sort of what happened.

Uniquely to this production, the actors all stayed in touch. We would all go off and do other projects, but we’d get back to Los Angeles and meet up. We went out for dinners.

I thought, “Oh, this could work.” When we came back for filming, the excitement was more, “I can’t wait for people to see this.” And quite genuinely, because we were surprised by the episodes.

Each episode is so completely different in the story that happens. You cannot anticipate what’s going to happen. It’s not a procedural where a  crime is committed, there’s an investigation and so on. There’s always a “wow” factor to each episode—something you didn’t see coming.

Lem, in the pilot, seems to be the guy that everyone in Midnight listens to and follows. Is he the de facto mayor?

Mayor? That would be great. Mayors get paid, though, mate! He’s the mayor that cannot be out during the day. He has an aversion to sunlight.

The character has a wisdom the other Midnighters respect. He’s been around that town for an incredibly long time. He’s not, however, the oldest person in town, which the audience will discover.  But I think he does sort of fill the father figure role. He’s the one who looks out for the youngins or the new ones.

He’s also willing to kill for the town, which not all the other Midnighters are. But because he doesn’t have to kill to survive, he is part of the community. It could be respect; it could also be fear.

Would you say he and Rev are each other confidantes?

Were you familiar with the books coming into this?

I actually read them after getting the job. I started reading them prior to the pilot and sort of completed them while we were working. At that time, I don’t think any of us really knew what direction it would g

It was fairly obvious the show was going to be a little bit different, because obviously Lemuel Bridger in the story doesn’t look like [me]. He’s the thin white duke, and I am not. So already there was a little bit of going away for the books. We use and other things to sort of draw an audience that might already know these stories into the characters we’re developing. I think maybe we explore their relationships a little bit more. And a lot more things happen, which television allows you to do.

The books were helpful, but our job is always to develop the characters in the scripts, not worry about how closely we follow the original stories. So far, so good, I think. I’m sure I’ll hear from you if it isn’t.

You will have filmed the complete season without hearing the fan feedback and having that social media conversation. Do you feel weird about that?

Well, yes and no. There hasn’t been the feedback, but we’ve had the freedom to just indulge in telling the stories.

To some extent you worry, “Hey, I hope we got that right.” But we’re just excited and nervous more from an “Oh my God, I hope they get to see what we’ve done, because this is actually cool.”

How are your eyes holding up with the contacts?

This is the third character I’ve played with contacts. In “300” I had golden eyes. “Sleepy Hollow,” I had yellow and red. Now I have piercing blue eyes that have this white refracted light layer behind them. If I look at a spot of light, it just explodes my eyes so I can’t see. So I’m playing this really menacing, threatening character and I can’t see a thing.

You hope you’re looking at the right person.

“I will bite—where the heck are you? I’ll bite you!” I think we pulled it off, though. The great thing about the contacts is they make it really easy to get into character, because it requires a certain amount of focus to just sort of calm yourself and deliver. As soon as the lenses go in, “OK, this is it; it’s showtime.”

Have you enjoyed Albuquerque?

It’s unique. I had been through Albuquerque twice before the pilot, and so there’s a certain amount of discovery. Two things: one, our time is so limited, because apart from just the sheer number of hours on the set, there’s the training and preparation, all the stuff that goes into it. So you often get, like, a Sunday afternoon only. But I’ve gone to Santa Fe to see my friends there, and I’ve done a few things in and around town.

The other thing is the weather: You never know what you’re going to get. It’s extraordinary. One day there was a sandstorm, it snowed, and there was bright sunshine. What do you do with that?

But I’ve enjoyed it, I really have. The crew’s been really welcoming and they’ve taken us around, so I got to see a number of places.

How has the landscape helped the show?

The landscape is a huge part of the story. The skies here are phenomenal; the sunsets are magical. And the mountains in the background; it’s just so cinematic. Mike Spragg, our director of photography, is really good. I think there’s sort of a very European sensibility to the episodes.

If you had your choice to play one of the other characters, who would that be?

Oh, tough one. Well, my girlfriend’s the assassin. That wouldn’t be bad. At least she gets out of town a lot and can live in daylight. I’ve been doing night shoots for a whole season.

Is your sleep schedule a little off?

It’s definitely off. There have been some very long nights. But it’s fun. That’s the ride.

Everyone living near Midnight knows there’s something crazy about the town. Does somebody from outside always want to mess with the Midnighters?

Oh, yeah. But isn’t that like real life? That’s what happens in Midnight: things happen, and part of what I think has bonded them is in order to solve the problem, they’ve got to band together. In doing that over and over, you start protecting each other, and that’s really what’s happened. The set-up is that they’ve had to look out for each other, and that’s why they are a community.

But they are also incredibly, uniquely gifted—or cursed. And again, the locals have grown to realize how protective their supernatural neighbors are. … I think what’s funny about it is that you can throw people who are very diverse together and if there are even just a few common threads, they eventually form their own community. That’s what happens here.

A tour of Bobo’s pawn shop