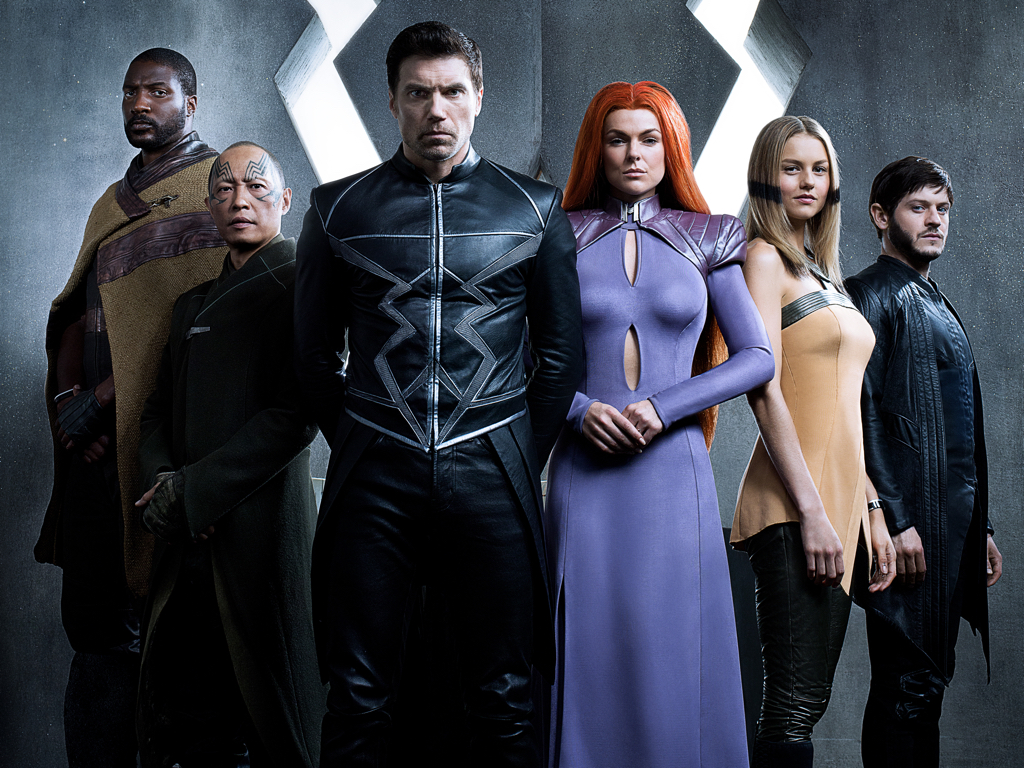 ABC is counting on genre fans being too nerdy to go out Fridays. The ABC fall primetime schedule puts one fantasy and two superhero shows on the night.

The network is moving “Once Upon a Time,” its fantasy that brings fairy tales and the modern world together. The new season, airing at 8/7c Fridays, will follow the adventures of an adult Henry (Andrew J. West).

ABC will premiere its new superhero series, “Marvel’s Inhumans,” at 9/8c Fridays in the fall. The eight-episode season will be followed by the return of “Marvel’s Agents of S.H.I.E.L.D.”

Channing Dungey, president of ABC Entertainment, said in a morning press call that fans of ABC’s genre series have long asked for the network to air them on the same night.

“We wanted to make Friday a destination night,” she said.

Later in the day at the network’s Upfront presentation in New York, Dungey announced that ABC has picked up a spin-off of “Grey’s Anatomy” that follows a group of heroic firefighters.

Dungey also confirmed the reboot of “Roseanne” will air in 2018. Read more about the “Roseanne” reboot here.

All times listed are Central. New shows are in bold.

Refugees from a war-torn country seek asylum in a small American fishing town, only the country these people are from is America—and the war they are fleeing hasn’t happened yet. As the government tries to uncover the truth behind this mysterious migration only one thing is certain: The lives of the people here—both the townspeople and these newcomers—will never be the same. Writers Dan Dworkin and Jay Beattie executive produce with Jason Reed.

Rob Bowman directed the pilot. The series is from ABC Studios.

When his career is ruined by scandal, superstar magician Cameron Black has only one place to turn to practice his art of deception, influence and illusion—the FBI. Using every trick in the book and inventing new ones, he will help the government catch the world’s most elusive criminals while staging the biggest illusions of his career. Writer Chris Fedak (“Chuck”) executive produces along with Greg Berlanti, Martin Gero and Sarah Schechter. Illusionist David Kwong (“Now You See Me”) will co-produce.

The series is from Berlanti Productions and Quinn’s House in association with Warner Bros. Television. David Nutter directed “Deception” and also serves as executive producer.

Set in the United States District Court for the Southern District of New York, aka “The Mother Court,” this new Shondaland drama follows brand-new lawyers working for both the defense and the prosecution handling the most high-profile and high-stakes federal cases in the country—all as their lives intersect in and out of the courtroom. Shondaland’s Paul William Davies created the series. Shonda Rhimes and Betsy Beers executive produce.

Shaun Murphy, a young surgeon with autism and savant syndrome, relocates from a quiet country life to join a prestigious hospital’s surgical unit. Alone in the world and unable to personally connect with those around him, Shaun uses his extraordinary medical gifts to save lives and challenge the skepticism of his colleagues. Daniel Dae Kim (“Lost,”“Hawaii Five-O”) and David Shore (“House”) executive produce.

The Gospel of Kevin

Kevin Finn, a cluelessly self-serving person, is on a dangerous path to despair. In a downward spiral, Kevin returns home to stay with his widowed twin sister Amy and his niece. On his first night there, an unlikely celestial being named Yvette appears to him and presents him with a mission—to save the world.  Executive producers Michele Fazekas and Tara Butters (“Marvel’s Agent Carter,” “Resurrection,” “Reaper”) created this light drama.

Paul McGuigan directed the pilot. The series is from ABC Studios.

“Marvel’s Inhumans” explores the never-before-told epic adventure of the royal family including Black Bolt, the enigmatic, commanding King of the Inhumans, with a voice so powerful that the slightest whisper can destroy a city. After the Royal Family of Inhumans is splintered by a military coup, they barely escape to Hawaii where their surprising interactions with the lush world and humanity around them may prove to not only save them, but Earth itself.

Scott Buck serves as showrunner and executive producer. Marvel’s Jeph Loeb and Jim Chory also executive produce. Roel Reiné will direct the first two episodes. This series is a Marvel and IMAX project and is co-produced by Marvel Television and ABC Studios.

The legendary comic book series will be brought to life in a way that has never been done before, as a version of the first two episodes will be shown globally in IMAX theaters for a two-week period beginning Sept. 1, 2017. ABC will then air the entirety of the series on the network, with additional exclusive content that can only been seen on ABC.

Ten Days in the Valley

“Ten Days in the Valley” stars Kyra Sedgwick as Jane Sadler, an overworked television producer and single mother in the middle of a separation whose life is turned upside down when her young daughter goes missing in the middle of the night. Just like her controversial police TV show, everything is a mystery, everyone has a secret and no one can be trusted.

“Ten Days in the Valley” is from Skydance Television. It is created and written by Tassie Cameron. Cameron executive produces along with Kyra Sedgwick, Jill Littman, Dana Goldberg, David Ellison and Marcy Ross.

Set in a Seattle firehouse, the latest series from the executive producers of “Grey’s Anatomy,” “Scandal” and “How to Get Away with Murder” follows a group of heroic firefighters. From the captain to the newest recruit, the new show follows these brave men and women as they risk their lives and their hearts both in the line of duty and off the clock.

Alex Schuman is a brilliant radio journalist, husband and father of two who is about to do something crazy—quit his job and start his own company. He quickly discovers it’s going to be a lot harder than he thought. Zach Braff stars, directs and is executive producer with Matt Tarses (“Scrubs”) and Davis Entertainment (“Dr. Ken,” “Blacklist”). Series is based on the podcast StartUp.

Young rapper Courtney Rose needs his big break. For years he’s toiled away in a small inner-city apartment, making music in his junk-filled bedroom closet. Tired of waiting for opportunity, Courtney cooks up the publicity stunt of the century—running for mayor of his hometown in California to generate buzz for his music career. Unfortunately for Courtney, his master plan goes wildly awry, ending in the most terrifying of outcomes: an election victory. With the help of his mother, Dina, and friends, including Valentina, Courtney will have to overcome his hubris if he wants to transform the struggling city he loves.

Based on the Danish series, “Splitting Up Together” is the story of a couple whose marriage is reignited by their divorce. Emily Kapnek (“Suburgatory”) writes and serves as executive producer of this new comedy, along with Ellen DeGeneres.

Jeff Kleeman, Mette Heeno, Mie Andreasen and Hella Joof are also executive producers of “Splitting Up Together,” which is based on the original series created by Heeno. It is produced by A Very Good Production and Piece of Pie Productions in association with Warner Bros. Television. Dean Holland directed the pilot.

ABC is bringing back “American Idol.” The network, along with producers FremantleMedia North America and 19 Entertainment, a division of CORE Media Group, will revive television’s most successful and recognized music competition series for the 2017-2018 season, bringing back the fan-favorite and making more dreams come true. A host and judges will be announced at a later time.

America’s favorite participants from past seasons of “The Bachelor” and “The Bachelorette,” from arch rivals to villains, will take competitive dating to a chilling new level.  In an ode to the Winter Olympic Games and slated to premiere in February 2018, “The Bachelor Winter Games” will reunite the all-stars at a luxurious winter resort, where they will go head-to-head in winter-themed athletic challenges, including the toughest sport of all—love.

“The Bachelor Winter Games” is a production of Next Entertainment in association with Warner Horizon Unscripted Television. Mike Fleiss and Martin Hilton executive produce.

Dancing with the Stars Junior

The Wonderful World Of Disney: The Little Mermaid Live!

In a two-hour special event, ABC will take the iconic “The Little Mermaid” animated feature film and intertwine it with show stopping LIVE musical performances via cutting-edge technology for an explosive evening honoring one of Walt Disney’s most celebrated classics. Fans of “The Little Mermaid” and Alan Menken and Howard Ashman’s Oscar-winning songs will enjoy this never-before-seen live action/animation hybrid television experience. A soon-to-be announced roster of celebrity artists will perform songs that will weave seamlessly throughout the original animated film.

For half a century, Rolling Stone has remained an iconic and important voice in American music, culture and politics. Now, the people who have told their stories through the Rolling Stone lens are coming together to reflect on the last 50 years. “Rolling Stone 50” will pay homage to the brand’s influence and impact through a curated journey of its most seminal moments. Live from New York City, the three-hour special television event, set to debut Wednesday, Feb. 7, 2018, will showcase live performances, short films, iconic on-stage moments, never-before-seen musical pairings, and celebrities that have shaped pop culture, music and politics.

Jimmy Kimmel and renowned actor/screenwriter Justin Theroux are teaming up to produce a live sitcom special for the 2017/2018 season. The “Untitled Kimmel and Theroux Project” will bring viewers classic sitcom scripts from the 70s, 80s and 90s, to be acted out live by today’s biggest names in comedy.

Smoking Baby Productions will produce the show, which will be taped in front of a live studio audience. Jimmy Kimmel and Justin Theroux serve as executive producers.