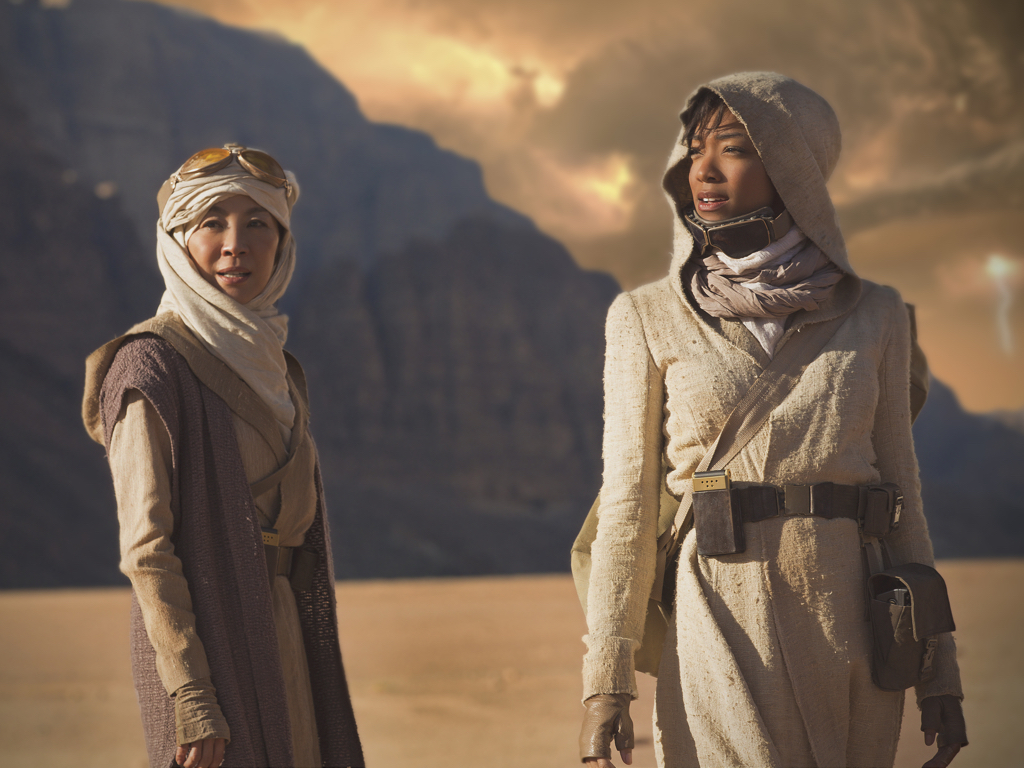 Even with all the delays of Star Trek: Discovery, I hadn’t lost my excitement for the new series coming to CBS All Access hopefully sometime this fall. After the release of the first look trailer Wednesday, I’m even more ready to beam aboard.

At the CBS Upfront presentation in New York, series lead Sonequa Martin-Green unveiled the trailer that introduces her character, First Officer Michael Burnham, and many others.

CBS also released a photo showing Martin-Green as Burnham and Michelle Yeoh as Captain Philippa Georgiou. The photo shows them dressed not unlike Daisy Ridleys’ Rey in “Star Wars: The Force Awakens.”

But hey, options in desert-wear are limited, and the two “Star Trek” officers are trekking through the sand on some kind of desert planet in the photo and trailer. (Tatooine, anyone?)

We also get a good look at the Klingons and Spock’s Vulcan father, Sarek. Actor Doug Jones once again goes under the makeup, playing a new alien in the “Trek” universe.

An observation about the trailer: Georgiou says she has been Burnham’s captain for seven years and it is time the first officer got her own command. Previous reports said Georgiou helms another Starfleet ship called the Shenzou. Captain Gabriel Lorca is in charge of the Discovery, according to previous reports.

So does Burnham end up as captain of the Discovery? Or its first officer? Does one of the other captains perish early in the season? Will the new series follow the adventures of more than one Starfleet crew?

That would be awesome.

The trailer confirms that “Star Trek: Discovery” is set 10 years before Captain James T. Kirk and his first officer, Spock, become big names aboard the Enterprise. We don’t see Jason Isaacs as Lorca, unless he’s masked as an alien.

According to CBS, the new series “will follow the voyages of Starfleet (notice it doesn’t name one ship) on their missions to discover new worlds and new lifeforms, and one Starfleet officer who must learn that to truly understand all things alien, you must first understand yourself.”

CBS also announced that the series first season will include 15 episodes, up two from the previously announced 13. It will be accompanied by a companion after show called “Talking Trek.”  (Let me guess, Chris Hardwick will host it?)

The new series will premiere on CBS and CBS All Access in the fall, but the  rest of the series will air only on the streaming service.

With her role in “The Walking Dead,” Martin-Green already has amazing genre cred. Same with Yeoh, who starred in “Crouching Tiger, Hidden Dragon” and many other genre movies.

The announced cast and guest cast are pretty impressive:

It’s been 50 years, six series and 13 movies since “Star Trek” debuted in the 1960s. I think it’s time for another show that celebrates inclusion and hope for the future like Gene Rodenberry’s original did.