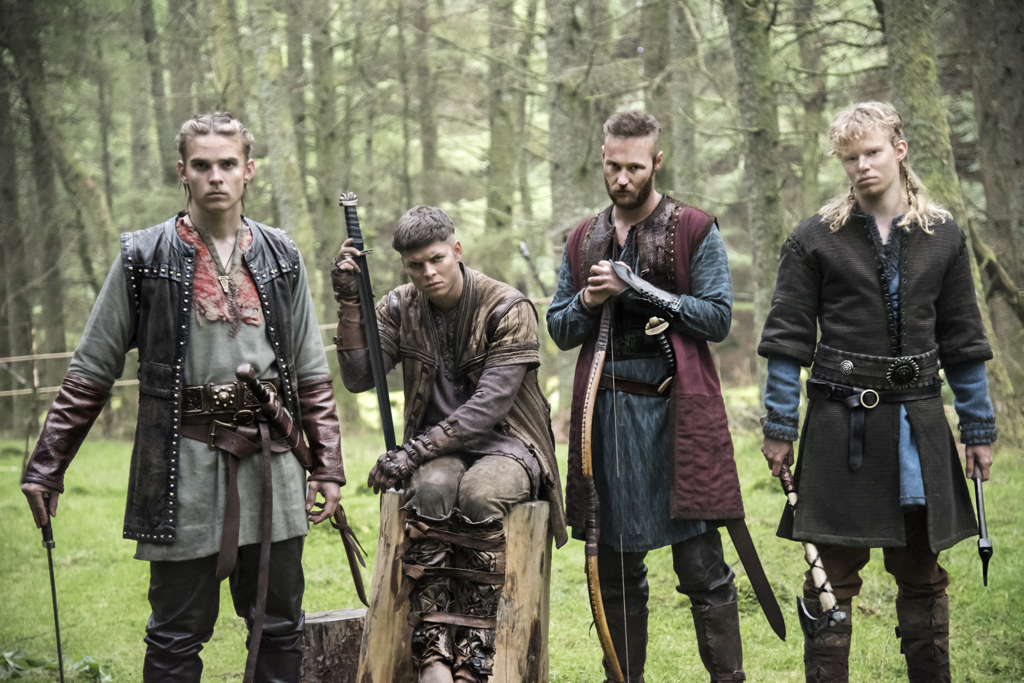 Ragnar’s sons grow up in ‘Vikings’

Vikings jumped ahead about a decade during its recent Midseason 4 finale, introducing a quartet of new actors to play Ragnar Lothbrok’s now-grown sons.

The brothers are the sons of Ragnar (Travis Fmmel) and Queen Aslaug (Alyssa Sutherland). Bjorn Ironside (Alexander Ludwig), Ragnar’s son with Lagertha (Katheryn Winnick), is their half brother. (Remember when Ludwig took over the role of Bjorn from the young Nathan O’Toole?)

In “The Last Ship” episode, Ragnar’s sibling rivalry with brother Rollo (Clive Standen) ended with Rollo’s Frankish forces defeating the Vikings and sending them back to Scandinavia. The outcome wasn’t shocking for history buffs, but series creator and writer Michael Hirst still managed to surprise.

After that battle, Hirst time-jumped and showed that after the defeat, Ragnar left Kattegat and his family. Fans—and his sons—will no doubt learn where Ragnar went during his self-imposed exile in the second half of the season. I wonder if he killed any bears …

His sons seemed to have mixed feelings about their dad when he returned at the end of the episode. They obviously resent him for leaving them, but still they are proud of his accomplishments. Crazy Ivar seemed absolutely giddy he was back and challenging his sons. Keep the ax away from that one, Ragnar!

“Vikings” will return later this year with 10 more Season 4 episodes.

Like Fimmel, Smith is an Australian actor. He was born in Scotland, but his family moved to Australia when he was a child. Smith starred in the long-running Aussie soap opera “Neighbours” and appeared in “Home and Away.” More recently he appeared in the short-lived British drama “Banished” and in Angelina Jolie’s film “Unbroken.”

In the show: Ubbe is the firstborn son of Ragnar and Aslaug. Earlier in the season, young Ubbe (as played by Luke Shanahan) tracked and spotted Floki (Gustaf Skarsgård) when the shipbuilder fled Kattegat.

Historically: According to the old Norse story “The Tale of Ragnar’s Sons,” Ivar was the firstborn of Ragnar and Aslaug, followed by Bjorn, then Hvitserk, then Sigurd. Other Norse sagas list a different set of brothers, including Ubbe and Halfdan. In these stories, Ubbe was one of the Viking leaders who invaded the Anglo-Saxon kingdoms in what is now England. Let’s call this artistic license, as Hirst seems to be mixing sources.

Ilsø hails from Denmark, where he appeared in the Danish series “Mikkel og guldkortet” and starred in such films as “The Model,” “The Absent One” and “Danny’s Doomsday.”

In the show: Hvitserk, the second oldest of Ragnar and Aslaug’s sons, witnessed his father’s defeat outside of Paris along with Ubbe. He harbors animosity for Ragnar’s actions after Paris, saying, “He betrayed our name. If he ever came back, I would kill him.” (Obviously he’s all talk.)

Historically: In “The Tale of Ragnar’s Sons,” Hvitserk fought alongside his brothers for years and at the death of their father, took control of Jutland, which is modern day Denmark, and Wendland, now part of Germany.

Swedish actor David Lindström is the son of author Ulf Lindström. He played Simon Nilsson in the Swedish political drama “Blue Eyes” and the 2013 film “The Yearning Room.”

In the show: Sigurd was born with a birthmark in his eye and became known as Snake-in-the-Eye. Aslaug prophesied her third son would bear the mark of Fafnir, the serpent-dragon her father killed. In Season 4, Sigurd tricked Aslaug into seeing that the wanderer Harbard (Kevin Durand) was bedding many of the women of Kattegat. When he discovered Bjorn’s daughter Siggy had drowned, he told his mother who, along with Ivar, didn’t seem to care.

Historically: Sigurd might have endured a lot so far in Season 4, but according to “The Tale of Ragnar’s Sons” he eventually rules the Danish island of Zealand, the now Swedish provinces Skåne and Halland, as well as several areas in what is now southern Norway. He married the daughter of the Northumbrian king who is said to have had Ragnar killed.

Andersen, like Ilsø, is a Danish actor. His TV credits include “Tvillingerne & Julemanden,” “Hedensted High” and “Outsider.” At age 11 in 2006, he appeared in the competition series “Scenen er din” (“The Stage Is Yours”) but was eliminated in the semifinals.

In the show: Ivar the Boneless got his name because he was born with twisted legs and he cannot walk on his own. Ivar doesn’t let lack of mobility hamper him, though. Earlier in the season, he used an ax to kill a playmate who was ignoring him. When Sigurd reported Siggy’s drowning, Ivar exclaimed, “Who cares?” (Do you think he killed her?)

He showed great confidence and strong opinions in the midseason finale. His brothers’ reactions to him suggest they consider him a bit of a wild card, and maybe a bit dangerous.

Ivar likely will be the most traditional Viking of the brothers because he was taught their ways by Floki (Gustaf Skarsgård) at Aslaug’s request. He hinted at Floki’s influence in the midseason finale. “You all sound like a bunch of Christians,” he told his brothers when they discussed Ragnar’s shortcomings.

Historically: Whether or not he actually had a disability, Ivar the Boneless managed great things, according to “The Tale of Ragnar’s Sons” and other Norse sagas. He led invasions, ruled the Vikings for a time and even ruled over northeastern England. Interpretations of his “Boneless” name range from Ivar not being able to walk to his having unusual flexibility.

Even more Vikings: All my Season 4 stories