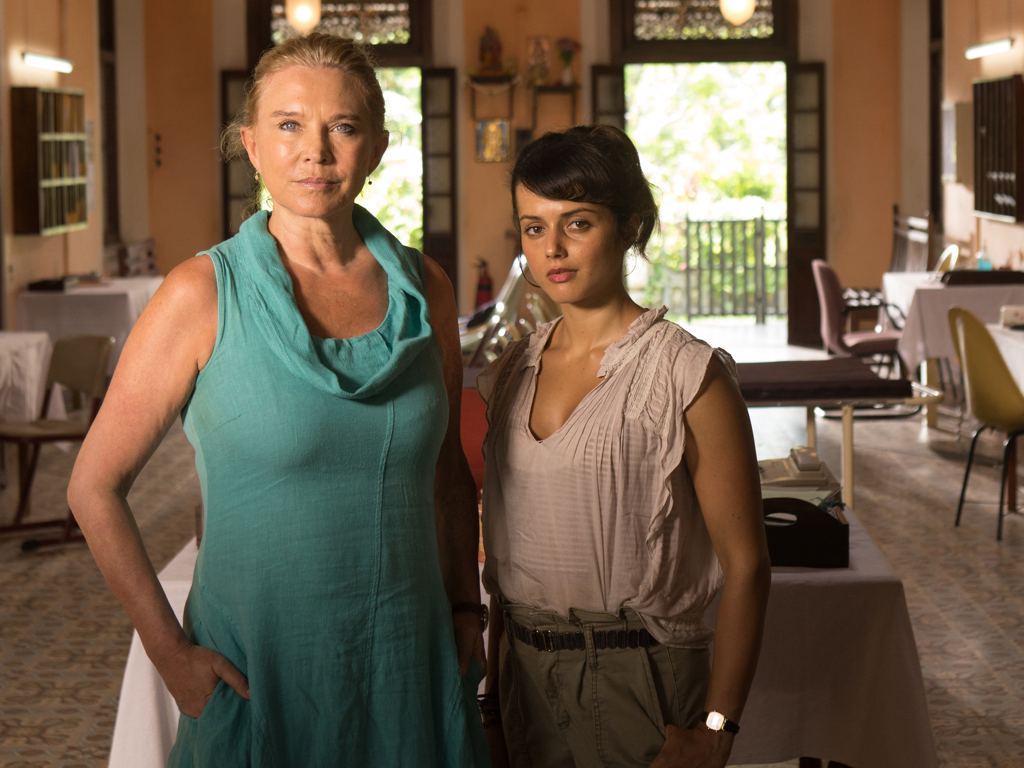 The Acorn TV April 2018 premieres calendar includes Season 2 of The Good Karma Hospital, a charming medical drama set in South India, and the exclusive North American premiere of No Offense, a female-driven police procedural from Paul Abbott, the creator of the original Shameless.

Acorn TV will stream the final episodes of the eleventh season of “Murdoch Mysteries” and more from the 1980s and beyond. Take a look at all the Acorn TV April 2018 premieres below.

The cast of “The Good Karma Hospital” Season 2. (Acorn TV)

BAFTA-winning and Emmy-nominated miniseries dramatizes the life of Sidney Reilly (Sam Neill), a Russian Jew who became one of the greatest spies ever to work for the British. Among his exploits, in the early 20th Century, were the infiltration of the German General Staff in 1917 and a near-overthrow of the Bolsheviks in 1918. Against a backdrop of international politics and intrigue, the series depicts the life of this flamboyant, ruthless and brilliant spy. Based on the 1967 book “Ace of Spies” by Robin Bruce Lockhart, whose father R. H. Bruce Lockhart was one of Reilly’s fellow spies. Neill received a Golden Globe nomination for the role. The ITV miniseries features an impressive slate of guest stars, including David Suchet, Bill Nighy, Hugh Fraser, Lindsay Duncan and Alfred Molina.

Nicholas Lyndhurst stars as Gary Sparrow, an accidental time traveller in this 1990s BBC sitcom. Gary leads a double life after discovering a time portal allowing him to travel between London of the 1990s and the same area during the Second World War.

Set in Toronto in the late 1890s, the mystery series centers on Detective William Murdoch (Yannick Bisson), a methodical and dashing detective who enlists radical new forensic to solve some of the city’s most gruesome murders.

Interview with a Murderer

Criminologist Professor David Wilson conducts a series of revealing interviews with convicted murderer Bert Spencer, the man suspected of killing paperboy Carl Bridgewater in 1978. Spencer, who has never been charged with the crime, denies he did it. The crime is one of Britain’s most infamous unsolved murder cases, not only because it involved the brutal, cold-blooded killing of a young boy. The case also became embroiled in controversy when the four armed robbers who had been sent to prison for Carl’s murder—the “Bridgewater Four”—had their convictions overturned some 20 years later. Professor Wilson re-examines the evidence surrounding Carl’s murder and obtains devastating admissions from the person Bert considered to be his alibi along with his ex-wife—who breaks a near 40-year silence. Professor Wilson presents his findings and his impressions of Spencer directly to him, which culminates in a shocking and blistering exchange at the end of the film.

Channel 4’s outrageous police procedural from writer Paul Abbott mixes laugh-out-loud moments with heartfelt drama. Set in a crumbling cop shop on the wrong side of Manchester, “No Offence” follows an unorthodox crack team of cops on the front line, wondering what they did to end up here, in this force, on this side of town. Keeping these streets clean is a Herculean task, enough to demoralize even the keenest rookie—but there’s a reason why this hotchpotch of committed cops are on this force, on this side of town. Drug labs, arsonists, neo-Nazis and notorious murderers are all in a day’s work for this close-knit team, led by the dizzyingly capable but unquestionably unhinged DI Vivienne Deering (Joanna Scanlan). Elaine Cassidy also stars.

From award-winning “Prime Suspect” writer Lynda La Plante, “Killer Net” focuses on a group of students who get involved in a violent internet-based game around the same time a series of murders takes place. Is there a connection? Psychology student Scott Miller (Tam Williams) becomes infatuated with a raunchy woman named Charlie who he meets through the internet. After being dumped by Charlie, Scott becomes obsessed with finding her again. He finds solace in an intriguingly addictive computer game called “Killer Net.” Shortly after he’s committed his first virtual murder, Charlie is found dead, slain and disposed of in exactly the same way. Guest stars include Paul Bettany and Lee Ingleby in early roles.

This popular ITV comedy follows the comfortable middle-class lives of three women living on separate floors of the same home. Life isn’t all that comfortable for Sarah (Prunella Scales), who has been left pretty well provided for by her late husband, a doctor called Henry. Her demanding mother Eleanor (Joan Sanderson), with whom she doesn’t get on, lives downstairs. Her adolescent daughter, Clare, lives upstairs. Clare (Janine Wood) craves independence—as long as her mother is there to clear up the mess.

Germany’s Enigma coding machine should have been Germany’s greatest weapon during World War II. It could reconfigure each message in 150 million ways and everyone thought it’s codes were unbreakable. This two-part doc tells the remarkable story of Station X, Britain’s code-breaking headquarters based at the country estate of Bletchley Park. Britain recruited 10,000 code breakers—an eccentric mob of schoolboys and academics, crossword fanatics and chess players. Against the odds, they broke the Enigma code, rendering it Germany’s greatest liability. The doc mixes recollections from code breakers with meticulous reconstructions filmed in Bletchley itself.