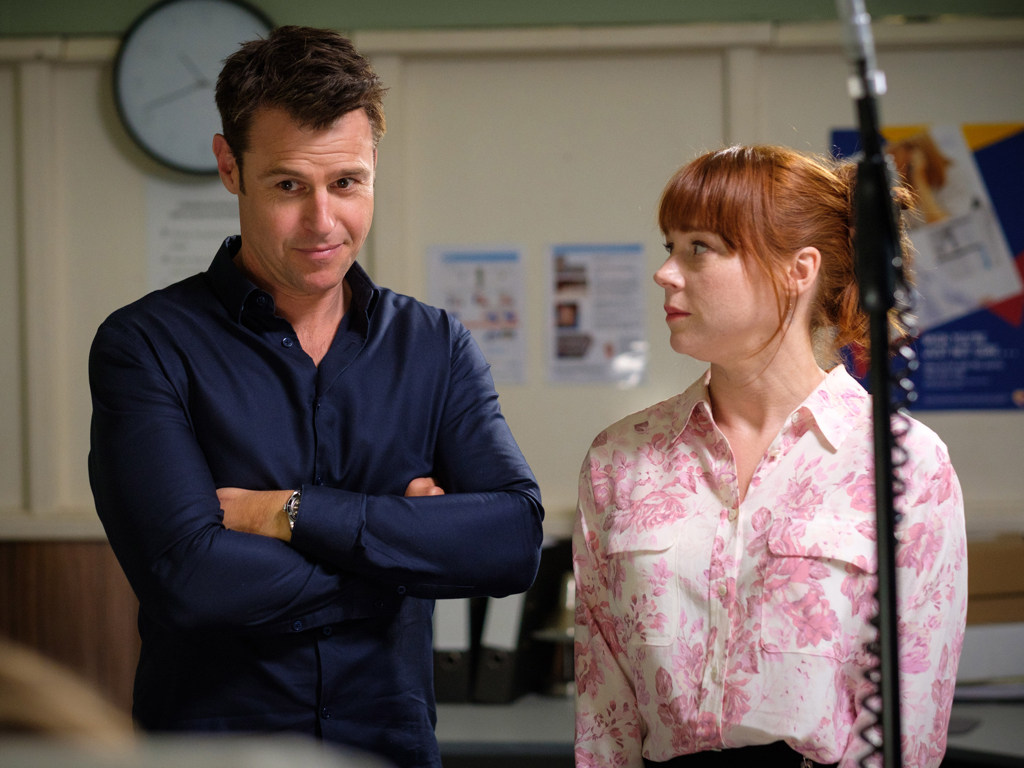 Rodger Corser and Hayley McElhinney star in Season 2 of "The Heart Guy" on Acorn TV. (Handout)

I spoke with Corser in 2017 just as he was filming the new season at Bondi Beach in Sydney, a scene viewers can see in the first few minutes of the premiere episode.

“We open the season with me body surfing out in the waves, but we’ve picked the flattest day on record at Bondi,” he said. “I think there was one very small wave that we managed to catch.”

The first two episodes of “The Heart Guy” premiere Feb. 5, with two episodes per week through the end of the month. The streaming service also continues the first season of its original series, “Girlfriends,” as well as Season 11 of the period drama “Murdoch Mysteries.”

Akin to an Aussie “Doc Martin” with its fish-out-of-water premise and eccentric characters, the series follows a charming and genius doctor Hugh Knight (Rodger Corser) forced to return to his remote hometown and become a local doctor after his personal life spins out of control. Ryan Johnson and Nicole da Silva co-star in the series titled “Doctor, Doctor” in Australia.

In Series 2, Hugh is determined to live out his probation in peace. However, there is no peace in tiny Whyhope. Relationships will be tested; with an election scandal, a kidney transplant and a wedding on the horizon. The dysfunctional Knight family faces a tough decision: will their struggles bring them closer together or tear them apart?

The popular mid-1990s PBS “Masterpiece” series is based on Scots author A. J. Cronin’s stories about the fictional medical hero, Dr. Finlay. “Doctor Finlay” updates the popular BBC series of the 1960s titled “Doctor Finlay’s Casebook.” Set in the 1940s, the series chronicles life in the town of Tannochbrae as people come to terms with post-war problems.

Doctor Finlay (David Rintoul) copes with upheaval in his personal and professional life as he returns from war service. Early storylines include the setting up of the new National Health Service and the modernization of the medical practice at Arden House, Tannochbrae, Scotland. Ian Bannen co-stars as Finlay’s semi-retired practice partner, Dr. Cameron. Annette Crosbie plays his housekeeper, Janet. Jason Flemyng rounds out the cast as Finlay’s assistant, Dr. Neil.

The six-part drama follows three friends struggling with the responsibilities that come with being a modern woman of a certain age. After the dramatic and sudden death of her husband, Linda reunites with two childhood friends. Each is facing her own issues, from a looming divorce to the loss of a high-powered job through age discrimination. They also are juggling the responsibilities of their grandchildren and aging mothers. But as questions over the circumstances of Micky’s death arise, accusations reveal secrets, deception and doubts that tear at the girlfriends’ bond.

Acorn TV’s hit period mystery series returns with Yannick Bisson as Detective Willian Murdoch. Set in Toronto in the late 1890s and early 1900s during the age of invention, the mystery series centers on the methodical and dashing Murdoch, who enlists radical new forensic techniques like fingerprinting, ultraviolet light and trace evidence to solve some of the city’s most gruesome murders. Inspired by Maureen Jennings’ novels, “Murdoch Mysteries” airs on the CBC in Canada and in the U.S. after Acorn TV as “The Artful Detective” on Ovation.

‘The Joy Of’ documentaries

Scotch! The Story of Whisky

David Hayman surveys the state of the Scotch whisky industry and examines the threats to its world dominance. The story of whisky embraces craftsmanship, culture, identity, land, science, marketing and ties itself to great historical events. A drink, certainly, but so much more: the story of Scotch is one of a multinational, multi-billion-dollar super-industry.

Here, for the first time, that story is told in detail through a warm, elegant miniseries. “Scotch! The Story of Whisky” marries the allure of scenic Scotland with engrossing storytelling, rich characters and frequent revelations. The tale of whisky is the tale of Scotland’s gift to the world, and so it follows that Scotch embroils itself in U.S history and travels to Sweden, Japan and Australia.

“Ackley Bridge” offers a character-driven, gritty, funny, truthful and mischievous look at the daily drama of the teachers, teenagers and families whose lives and cultures collide in a fictional 21st century Northern town. With the modern British family at its heart, the series explores its glorious dysfunctionality and provides an authentic account of the very real issues that emerge from a modern so called “community.” The series is set in Ackley Bridge, a Yorkshire town which has a large white community and a large Asian community—which don’t mix but now merge into one school. Will the new academy sink, swim … or implode?