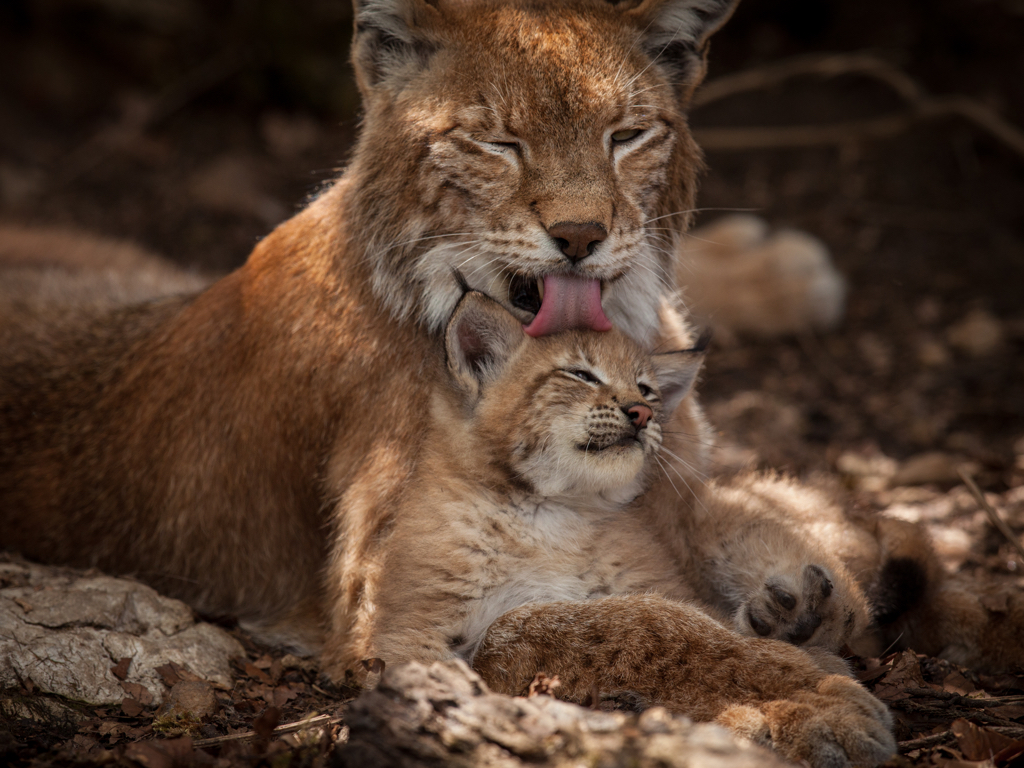 A lynx licks her cub in Kalkalpen National Park, Austria, in "Forest of the Lynx" on PBS's "Nature." (Rita Schlamberger/ScienceVision)

Nature purrs along in ‘Forest of the Lynx’

Nature takes viewers on a tour of Kalkalpen National Park in Austria, the home of one of my favorite wild cats, the lynx, in Forest of the Lynx.

I was just telling someone recently about how much I would like to play with the wild cats at a zoo, if only zoo officials—and the cats—would let me.

I once got to pet a lion at the Henry Doorly Zoo in Omaha when he was sunning himself against a fence in the outdoor habitat. He seemed to enjoy me scratching his hip as he kind of cooed much like my cats do. The lion was just a bit louder.

Speaking of pets, did you know having a pet can be good for your health? But I digress. Let’s head back to the forest …

“Forest of the Lynx” chronicles the return of the lynx to the remote forests of Austria’s Kalkalpen National Park. The largest area of wilderness in the Alps, the park was once mined and logged nearly to death.

But industry abandoned the area decades ago, and for nearly 25 years the wilderness has been mostly undisturbed by man. The makers of “Forest of the Lynx” spent three years exploring the park’s forests, recording the complex partnerships among trees, insects, animals and other plants.

Narrated by actor Toby Leonard Moore, the “Nature” episode examines the ancient forest’s regeneration back to its natural state. The return of the lynx after a 150-year absence is testimony to that revival. But as the show explains, the lynx is threatened by poaching.

Viewers can expect to see more than the lynx, however. The program highlights the lives of pygmy owls, woodpeckers and colorful insects living in the forest.

“Forest of the Lynx” premieres at 9/8c April 26 on PBS (check local listings). After it airs, viewers can stream it at pbs.org/nature. You’ll also find past “Nature” episodes, including “Hotel Armadillo.” Read more about the program below.

Forest of the Lynx

Austria’s Kalkalpen National Park, nestled between two great mountain ranges, is the largest track of wilderness in the Alps. But it wasn’t always that way. The park was once the site of major logging and mining operations. Those activities ceased more than two decades ago.

Abandoned and unmanaged by man, the Kalkalpen’s forests may look like they are under siege from the extreme mountain weather that impacts its landscape in the form of floods and landslides. But it is just part of the process of how the park is reverting back to its natural and primeval state. One of the symbols of this return to the wild is the reappearance of the lynx after a 150-year absence from these woods.

“Forest of the Lynx” follows the life cycles of the park’s inhabitants through the seasons. In the spring, a female lynx sets out to establish her own territory after a year of being reared and taught survival techniques by her mother. It is a solitary life as she has to hunt in a new territory while avoiding other lynxes. In a different part of the forest, another lynx gives birth to two kittens who need her constant attention. They need every chance to succeed as the film states that only one in four will survive its first year.

Meanwhile, the white-backed woodpecker is at work hacking into rotting trees to obtain insects and juicy larvae. One of Europe’s rarest birds, it survives in Austria due to the vast quantities of dead wood. As it is mating season, the pygmy owl forgoes his attacks on songbirds and yellow-necked mice to woo a female. He wins her over by revealing his tree-hole, created by a woodpecker, as it provides a safe shelter for offspring.

As it gets warmer, trees continue to grow until they somehow know they’ve reached their limit. The film explains that the older trees reduce their intake of nutrients from the soil so that the younger trees have as much as they need. How these trees communicate with each other both above and below ground remains a mystery. What is clear however are examples of how trees try to combat invaders like bark beetles and alert neighboring trees to these attacks as well as respond to periods of drought.

By fall, the beech trees release their nuts which are either stockpiled by small rodents to survive the winter or left to germinate next spring. As winter descends, it is mating season for the chamois who inhabit the steep mountain slopes while the trees become inactive. As for the lynx, their limited reintroduction into the Austrian Alps is being impacted by poaching. But the growing awareness of the lynx’s plight should help protect future populations of this symbol of the ancient forest.

Thirteen Productions LLC  produces “Nature” for WNET. “Forest of the Lynx” is a ScienceVision production.

Forest of the Lynx images